The growing number of children and teens exposed to traumatic events in everyday life has forced the state’s crisis intervention teams to respond to a broader range of behavioral and mental health issues, and those teams often serve as a bridge until at-risk youth find appropriate outpatient or inpatient services. 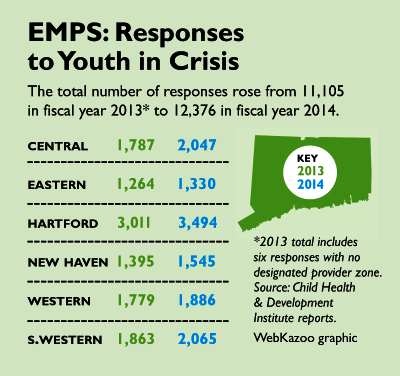 Research shows childhood exposure to violence, physical or sexual abuse, and other traumatic events can cause chronic health and behavioral health problems, and such exposure is associated with increased involvement with the child welfare and criminal justice systems.

“The number of children who have been exposed to trauma is a significant concern. It’s a common occurrence among young people,” said Jeffrey Vanderploeg, vice president for mental health initiatives for the Child Health and Development Institute of Connecticut (CHDI). He is director of the EMPS Performance Improvement Center, which is housed at CHDI.

EMPS is a crisis intervention program with a statewide network of about 150 mobile mental health professionals who assist children up to age 18 with behavioral or mental health emergencies. When a call is placed to 2-1-1 from any Connecticut town, clinicians respond within 45 minutes, either by telephone or at a face-to-face crisis assessment and intervention at home, at school or in the community. They can remain involved for up to 45 days, creating care plans, coordinating services and following up.

Last fiscal year, EMPS provided 12,376 instances of care – up 11.4 percent from the previous fiscal year – and some worry that demand will soon exceed the program’s capacity.

State lawmakers are currently considering future funding for EMPS and other mental health initiatives.  In October, Gov. Dannel Malloy issued an “action plan” for children’s behavioral health that called for using $160,000 to post a full-time EMPS crisis-intervention worker in the emergency department of Connecticut Children’s Medical Center and a part-time worker in another hospital. The plan also said the governor was “considering” enhancing the EMPS network by increasing the hours of service from 11 hours a day to 18 hours a day, at an expected cost of $3 million. Current EMPS costs are about $10.5 million this year.

EMPS was created to assist children in their homes and communities, reduce emergency department visits, and divert youth from more restrictive and costly interventions, such as hospitalizations, residential care settings or arrest. Funded by the state Department of Children and Families in partnership with United Way of Connecticut, the program serves all youth regardless of health insurance status.

Heightened awareness about behavioral health issues and the EMPS program accounts for some of the increased demand for services, experts said. But clinicians also report an increase in the severity of cases, compounded by the shortage of outpatient and residential treatment placements and the inability of many families to afford the behavioral health care their children need.

“We’re seeing kids who require an intense level of services that might not be available right away. We’re being called in to provide treatment in the interim so their situation does not escalate. Some children need a high level of care. But others can step down from the crisis,” said Jessica Welt, director of crisis services at the Child Guidance Center of Southern Connecticut. The center is one of six agencies that provide crisis intervention services from 15 satellite sites statewide.

“EMPS clinicians are doing a tremendous job of responding to crisis, but their ability to follow up with clients is being stretched,” Vanderploeg said.

Twenty percent of Connecticut youth – that’s 156,000 children under age 18 – could benefit from behavioral health treatment, but many can’t access services, according to the Connecticut Children’s Behavioral Health Plan. The plan was developed after the Sandy Hook Elementary School shooting that killed 20 students and six adults in 2012.

But more Connecticut children and young people with mental health problems are being hospitalized. Mental disorders surpassed respiratory problems and all other ailments as the leading cause of hospitalization in Connecticut in 2012 for children ages 5 to 14, teenagers and younger adults, according to a new state Department of Public Health report. Common conditions among children include mood disorders, depression, attention deficit disorder and disruptive behaviors.

Youths 13 to 15 years old (37.6 percent) and 9 to 12 years old (24.5 percent) accounted for most EMPS clients. Harm or risk of harm to self or others (36 percent) is the most common reason parents, school staff and police call EMPS, followed by disruptive behavior (22 percent), depression (15 percent), family conflict (6 percent) and anxiety (6 percent).

Elizabeth Peralta, a social worker and manager of crisis intervention at Danbury Hospital, assists children and adolescents who come to the emergency department. Volume has remained steady, she said, “but the cases are very much more involved and intense.” She steers youth who do not require hospitalization to EMPS to connect with community behavioral health services.

“There is a huge need for mental health services for children and adolescents,” said Peralta. “They and their families are struggling. It’s heartbreaking.”

“We’re seeing more kids who are traumatized by problems at home and at school. Their actions and behaviors are more understandable when you view them in the context of what is happening in their environment,” said Amy Evison, senior program director for Community Health Resources in Middletown, which handled more than 1,200 crisis calls last year.

Social media is a major source of angst. “We see lots of kids who are struggling with how to manage social media,” said Evison. “They have contact with people in the community and the world that they don’t even know, yet they’re immediately impacted by what they say. Kids are saying very violent and threatening things over social media.”

Christine Mullin, one of five social workers serving 2,600 students at New Britain High School, contacts EMPS clinicians at the Wheeler Clinic in Plainville about four times a month and sometimes twice in a week.

“The number of kids who need help keeps increasing each year,” said Mullin. “It’s hard to keep up with demand.”

Mullin sees students who are experiencing trauma, anxiety, panic attacks and depression, with some teens threatening to harm themselves and others. Students face multiple stressors, ranging from academic pressure to succeed to concerns about unemployment and hunger at home.

“What is wonderful about EMPS is that they come out to the school for all forms of crisis, not just when a student is suicidal,” said Mullin. “They can help students who are in a state of serious duress that could worsen without early intervention. It’s a preventative measure.”

With assistance from EMPS, Mullin has been able to keep students from inappropriately using the emergency department. EMPS clinicians also “bridge the gap” by following clients for up to 45 days until children and families are connected to home- and community-based services.

“I know our families and kids are in good hands when EMPS is involved,” she said.

Latin America children traumatized by their journey to the United States and their experiences back home represent a growing portion of youth accessing crisis services, said Welt, of the Child Guidance Center. The agency – which saw a 33 percent increase in crisis calls last fiscal year – serves Stamford, New Canaan, Greenwich and Darien.

“Fairfield County has a large immigrant population. We’re seeing an increasing number of children and young adolescents who have been exposed to horrific traumas en route to the United States or in their country of origin,” she said. These include youths who have experienced or witnessed physical or sexual abuse, assault, homicides, separation from loved ones, gang violence and more.

For some youths, the trauma of witnessing the arrest of a parent or caregiver can have long-lasting implications, said Lt. Sean Grant of the Manchester Police Department. Grant is the liaison for REACT (Responding to Children of Arrested Caregivers Together), which brings police and EMPS clinicians together to support traumatized children.

“We understand kids are seeing a lot of traumatic events in the world and in our community,” said Grant. “As much as we are called up at times to be social workers, we don’t have expertise in this area. It’s nice to be able to call EMPS professionals when we don’t have all the answers.”

Experts don’t expect demand for crisis services to lessen anytime soon, given the shift from congregate to community-based treatment settings, a shortage of child psychiatrists, and the lack of sufficient inpatient and outpatient treatment placements.

Families with health insurance plans that have high co-payments and deductibles are struggling to find affordable behavioral health services. Some child psychiatrists don’t accept commercial insurance at all.

“We see many families who may have insurance, but they still can’t afford the services their children need, such as medication, partial hospital programs or an intensive in-home program,” said Evison. “Health care is out of reach for many working poor families.”

Disparities in access to care among children with private insurance and those enrolled in HUSKY, the state’s health insurance program for the poor, exacerbate the situation.

“People in the child welfare and court systems have access to a more robust range of evidenced-based mental health services at home and in the community than what is available to people with commercial insurance,” said Vanderploeg. “Access to services even differs for children (covered by the state) depending on whether they entered through the child welfare or court system. These are all issues that were struggling with and need to change.”

For now, advocates are calling for increased funding from private and public insurers to support mental health services for children, including the EMPS program. “There are many kids out there facing mental health problems that need to be addressed,” said Welt.