A month before he left prison, Jeffrey Murdock, a veteran who suffers from depression and multiple sclerosis, thought his future would entail living as a patient in a state mental hospital.

But Murdock’s outlook changed drastically after a Veterans Health Administration social worker met with him while he was still in prison, assessed him and arranged for him to receive an apartment, food, clothing and medical care upon his release. 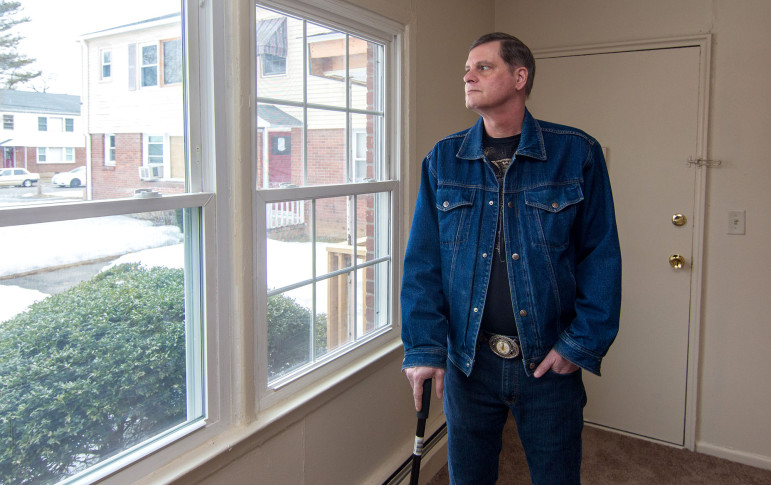 Jeffrey Murdock, 55, in his apartment in West Haven.

Murdock, 55, is one of 50 incarcerated veterans who have been have been helped since June by the VA jail release program, according to Michele Roberts, the social worker who runs it. Assistance includes housing, medical care, medications, and substance abuse treatment, all of which have helped the veterans avoid situations that put them at risk for re-arrest. Just two are back in jail and a third left the program, Roberts said. All but two are men.

There are 518 veterans in state prisons, with 180 eligible for the VA jail release program, Roberts said. Veterans who are eligible must have been honorably discharged, and other conditions include length of service, income, disabilities and commendations. About 180 veterans currently incarcerated aren’t eligible because they either received dishonorable or Other Than Honorable (OTH) discharges, or their military discharge status isn’t known, Roberts said.

She travels to state prisons meeting with veterans who are nearing release, finding them through lists provided by the U.S. Department of Defense and referrals from the state Department of Correction. She said that most served in the Iraq, Afghanistan or Vietnam wars and about half have mental health and/or substance abuse problems.

Whether their needs are housing, psychiatric or medical, they “get a good, solid plan,” Roberts said. “We really look at the big picture. I want those guys to succeed,” she added.

Roberts “saved my life. I essentially had no place to go,” Murdock said. He explained that partial paralysis from MS would have made him a bad fit for a homeless shelter.

When he arrived at his federally subsidized apartment in West Haven, he was met by a VA staffer who took him shopping for clothes at Goodwill, a housing supervisor who bought him groceries, and was given a doctor’s appointment for the following day so he could get his medicine.

He is living on Social Security and sees a primary care physician and a psychiatrist at the VA, has completed a VA anger management program, and reports to his probation officer in Milford monthly. 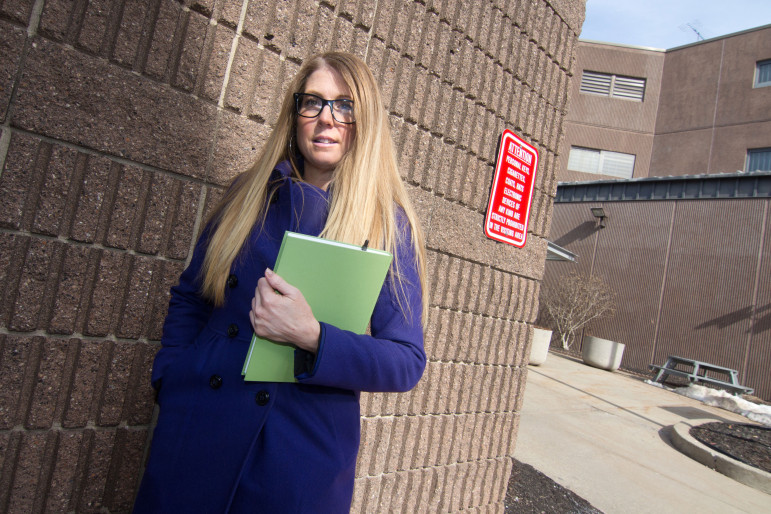 Michele Roberts stands outside the New Haven Correctional Center where she meets with prisoners.

Roberts said incarcerated veterans have varying needs, ruled by such factors as their finances, family support, and their health. Some only need to be connected to a VA primary care physician while others, like Murdock, require a range of services. She said a major challenge is finding housing for sexual offenders because there are only six beds in the state available for them at three homeless shelters: Danbury Shelter, South Park Inn in Hartford, and Columbus House in New Haven.

“What I’ve learned about this is, every case is different,” she said.

The VA conducts forums in prisons to answer inmates’ questions and provide information about services and eligibility. Laurie Harkness, director of the VA’s Errera Community Care Center which operates the program, explained that “many of them have not had VA services before. Many of them do not know they’re eligible for VA services.”

Murdock said he long thought he wasn’t eligible for VA services because he was never in combat. In fact, the first time he sought help as a veteran was in 2012, 30 years after he left the Navy, when he lived at Homes for the Brave, a residence for veterans in Bridgeport.

Margaret Middleton, executive director of the Connecticut Veterans Legal Center, has represented for free hundreds of veterans seeking upgrades in their discharge status. She said she disagreed with the policy of excluding all veterans with OTH discharges since some may be eligible for VA services. OTH is a “gray” designation that doesn’t automatically disqualify a veteran from VA services, she said.

To enhance the program, Harkness said she has hired a forensic psychiatrist who will begin working in April. “We have been shocked at how much of a need there is” for psychiatric treatment, she said.

As for Murdock, he is “very optimistic.’’ He said he shared his experiences to “help the next guy. The alternatives aren’t very rosy. If it can help a guy, give another chance to get things right, they’ve certainly done that for me. For all the horror stories you hear about the VA, there are a lot of good people doing a lot of good things.”