If you are a man and your ability to have sex is flagging, the market offers a host of prescription medications for treatment.

If you are a woman and find yourself in a similar situation, you have no Food and Drug Administration-approved

treatment available to you. Yet researchers say that up to a third of adult American women suffer from some kind of sexual dysfunction.

One drug, flibanserin, was recently resubmitted for approval to the FDA, which has turned it down twice already. When that non-hormonal drug first entered the public consciousness, the press quickly labeled it “female Viagra,” but that’s not accurate. Flibanserin works on a woman’s brain. Viagra goes directly to a man’s genitalia. Insert gender joke here: __________.

So far, the FDA has not been convinced of flibanserin’s effectiveness. The FDA also said there were insufficient tests on the drug’s potential interaction with compounds such as Zoloft or Prozac. They suggested the company submitting the drug, North Carolina-based Sprout Pharmaceuticals, conduct more tests. There are also concerns about side effects, including sleepiness, dizziness, and nausea.

But some drug developers and others say flibanserin is being held to a higher standard than similar medication meant for men. You don’t have to watch a lot of television to hear dire admonitions that certain erectile dysfunction medications can result in a four-hour erection. Side effects of Viagra can also include dizziness and nausea. Oh! And blindness. In one or both eyes. And sudden hearing loss, in one or both ears. 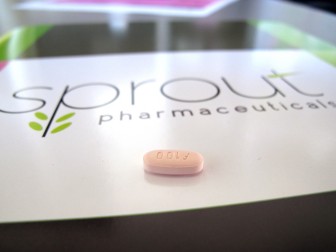 By just about any measure, a score of 24-0 could be considered a rout. Have the submitted female dysfunction drugs really been so ineffective or dangerous? Or is this an indication that in the world of science, female sexual dysfunction isn’t considered serious enough to warrant that much attention? Or are we afraid that women with a healthy libido might not be a good thing?

I don’t have the answers, but I sure enjoy asking the questions.

Flibanserin was developed by Boehringer Ingelheim, a pharmaceutical company whose U.S. headquarters is in Ridgefield, and whose products span the medicine cabinet from prescription medicine such as Flomax to over-the-counter medications such as Zantac.

The FDA first said no to flibanserin in 2010. Sprout took over development in 2011, and, according to its website, that company “is focused solely on the delivery of a treatment option for the unmet needs of women with HSDD,” or hypoactive sexual-dysfunction disorder.

According to the National Institutes of Health, HSDD can affect as many as 30 percent of the country’s women, though other organizations – most notably the FDA – place the figure closer to 10 percent. The disorder is marked by a lack of desire for sexual activity (including sexual fantasies) that causes distress or difficulty in significant relationships. Thus far, the treatments range from lifestyle changes, examining the woman’s medication that might be cutting into her sexual desire, hormone therapy, or marital therapy. Flibanserin would be the first FDA-approved medicine that directly addresses HSDD.

Researchers say that part of the challenge is that treating sexual dysfunction in most men is a relatively straightforward matter. Erectile dysfunction can be treated effectively as a physiological disorder. While there are women for whom a lack of sexual desire is based on physiology, research tends to lean more toward addressing the brain. As Daniel Bergner wrote in a 2013 New York Times Magazine article, “Viagra meddles with the arteries; it causes physical shifts that allow the penis to rise. A female-desire drug would be something else. It would adjust the primal and executive regions of the brain. It would reach into the psyche.”

This makes research (and approval) more complicated. Sprout resubmitted the drug last month. Let’s see if this time, it works.