Candid online posts describing the challenges of breastfeeding fill the Facebook page of Breastfeeding USA’s Connecticut chapter. The daily stream of anecdotes, questions and comments alternate in tone from exasperated to celebratory.

“Small victory for today. I actually breastfed in the open with my husband and day care provider in the same room (with a nursing cover, of course), but I haven’t done that yet, so I feel good about it. “

“Any tips to get better pumping results? I went back to work this week and I’m struggling to keep up with the baby.” 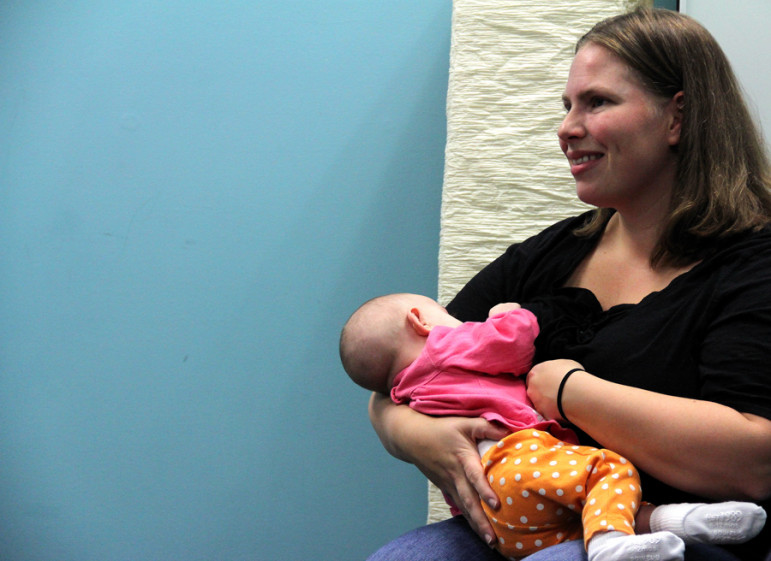 Breastfeeding USA is a community-based mother-to-mother support organization that’s operated a Connecticut chapter since 2012. The volunteer group hosts monthly meetings in seven locations and is striking a chord on social media, connecting more than 860 local breastfeeding moms and fulfilling a constant demand for reliable breastfeeding information.

The state’s burgeoning network of mother-to-mother support is a key contributor to the rising rate of breastfeeding in Connecticut, experts say.

According to the 2014 Breastfeeding Report Card issued by the U.S. Centers for Disease Control and Prevention, 83.3 percent of babies born in Connecticut start their lives being breastfed. Connecticut’s rate exceeded the national average of babies “ever breastfed,” which is 79.2 percent.

The state has made great strides and increased the number of babies “ever breastfed” by 12.3 percent over the past five years, according to CDC report card data.

The 2014 report card ranks Connecticut higher than the national average for babies still being breastfed at 6 months (51.4 percent versus 49.4 percent) and for 6-month-old babies nourished exclusively with breast milk (19.2 percent versus 18.8 percent).

“The data is positive and is the result of the work of many programs,” said Dr. Kathleen Marinelli, a neonatologist and member of the Human Milk Research Center at Connecticut Children’s Medical Center.

Another major factor helping Connecticut boost its number of breastfed babies is the Baby-Friendly Hospital Initiative (BFHI). Established by the World Health Organization and UNICEF, BFHI is a global program that recognizes hospitals that realign care to promote breastfeeding.

Connecticut ranks second in the nation for births at “baby-friendly hospitals,” said Michele Griswold, chairwoman of the Connecticut Breastfeeding Coalition, which spearheaded the effort to get more state hospitals involved.

Hartford Hospital earned its designation as Connecticut’s first baby-friendly hospital in 2000. Since then, seven more hospitals and birthing centers joined the list. Six additional Connecticut hospitals are currently working on the initiative.

Not all hospitals seek the designation. Danbury Hospital has a “very high breastfeeding initiation rates,” standards set forth by the World Health Organization and The Joint Commission Perinatal Core Measure Set for breastfeeding.

“Although we promote breastfeeding, and work hard to meet the goals and desires of women who wish to exclusively breastfeed, we felt it more important to support all mothers and fathers in their choice regarding how they wish to feed their infants,” said Maryalice Cullen, director of Patient Care Services, Danbury Hospital.

In addition, two laws in Connecticut support breastfeeding. The first protects a mother’s right to nurse in places of public accommodation, known as the “breastfeeding in public law,” passed in 1997. The second, which took effect in 2001, mandates all Connecticut employers allow a mother to “express breast milk or breastfeed on site at her workplace during her meal or break period.”

While more babies born in Connecticut are getting breast milk initially, the number of newborns “receiving formula before two days of age” is also increasing, the CDC report shows. In five years, the rate swelled from 18.4 percent to 25.6 percent.

“That’s a scary number. Worries a lot of us,” Marinelli said. “What that means is babies are being supplemented with formula in the hospital. A lot of the time, mothers may not even know their babies got formula. A quarter of the babies whose mothers want to breastfeed them are still getting some sort of formula supplementation in the first two days of life.”

Mary A. Marshall-Crim, the lactation program leader at Hartford Hospital, said babies requiring supplementation in the hospital are only those with an actual medical need, such as infants born before 37 weeks or with very low birth weight whose mothers may have difficulty producing enough milk.

Marinelli said the uptick in newborns receiving formula before two days of age is an indication that some of Connecticut’s 28 birthing centers are still not supporting mothers well enough to help them succeed at breastfeeding.

Griswold added that one other concern not highlighted by the CDC statistics is the disparity in breastfeeding rates by race, ethnicity and socioeconomic status.

Low-income and minority populations continue to face unique barriers to breastfeeding, she said. 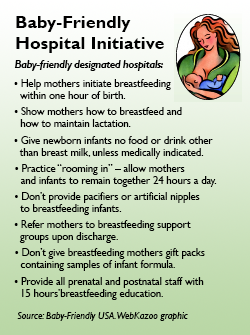 Why Is Breastfeeding Important?

“One of the most highly effective preventive measures a mother can take to protect the health of her infant and herself is to breastfeed,” the former U.S. Surgeon General Regina M. Benjamin declared in a 2011 national “Call To Action to Support Breastfeeding.”

Experts consider breastfeeding the best source of infant nutrition and immunologic protection. Breastfed babies are less likely to become overweight and obese, while formula feeding of babies is associated with increases in common childhood infections, such as diarrhea and ear infections. Formula-fed babies face higher risks for major chronic diseases and conditions, including Type 2 diabetes, asthma and obesity.

“We know there is a strong connection between breastfeeding and lower risk of breast and ovarian cancer,” Griswold said. “Breastfeeding is not just a children’s issue. Breastfeeding is good for the mother’s long-term health as well.”

There’s the money savings, too. Families can spend $1,200 to $1,500 on infant formula in the first year alone, according to the surgeon general’s report. Breast milk is free.

Marinelli said the surgeon general’s call to action was a game-changer for breastfeeding in the United States. It took breastfeeding out of the realm of being a private, personal decision by a mother and made it into a national public health initiative.

Mothers can now gain access to a breast pump and professional lactation services through provisions in the Affordable Care Act, as well.

“As a whole, the state of Connecticut is in good shape,” said Marshall-Crim of Hartford Hospital. “We’ve done a nice job with initiation. Duration is what we’re working on now.”

Marshall-Crim said mothers get plenty of support in baby-friendly hospitals, “but what happens in the 24 to 72 hours between the hospital and baby’s first pediatric appointment can make or break breastfeeding exclusivity and success.”

Statistics show three months after giving birth, more than half of breastfeeding mothers in Connecticut start using formula. By six months postpartum, nearly half give up on breastfeeding.

Breastfeeding is on the rise, but culturally, it isn’t yet recognized as the norm. Stumbling blocks – from engorgement to embarrassment to societal and family pressures – hinder mothers from nursing their babies long-term. And breastfeeding isn’t always easy. Techniques often need to be taught.

The top reason why women give up on breastfeeding or start supplementing with formula is “going back to work,” said Griswold of the Connecticut Breastfeeding Coalition.

“We have to make sure we are giving moms the support they need to make it through the first two weeks. That’s when moms are most vulnerable to giving up,” Marshall-Crim said.

Breastfeeding advocates say they would like more continuity of support for mother-baby pairs, from the OB/GYN’s office to hospitals to pediatricians and the community at-large.

Carol Delaney of South Windsor, a longtime breastfeeding counselor who is a founding member of Breastfeeding USA’s Connecticut chapter, said her group spends a lot of time on the concerns of employed breastfeeding mothers, including how to pump, how to maintain supply and how to bottle feed a breastfed baby.

One of the best steps an expectant mother can take, Delaney said, is to educate herself about breastfeeding before the baby is born – sign up for prenatal classes, attend a local breastfeeding support group meeting, join an online community.

“When women come out of hospital, they’re vulnerable. Those first few days after birth are intense,” Delaney said. “You’re worried. You’ve got these big breasts and a tiny little baby. Knowledge takes away a lot of that stress.

“So many things stop us that should never stop a woman from breastfeeding her baby.”

Marie K. Shanahan is an assistant professor of journalism at the University of Connecticut, a C-HIT board member and the breastfeeding mom of an 8-month-old baby girl.

Here are some other breastfeeding resources:

The U.S. Surgeon General’s Call to Action to Support Breastfeeding, 2011