Have you met Connecticut’s ALICEs? Chances are, you have. ALICE could be the man who counts change for you in the drive-through, or the woman who drives your child’s bus to school. 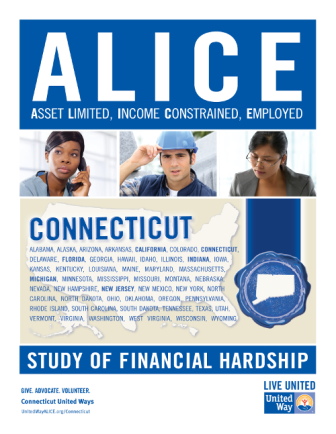 Recently, Connecticut’s United Ways released a report on the state’s ALICEs – or Asset Limited, Income Constrained, Employed residents. The report included some stark numbers, including this one: Thirty-five percent of Connecticut workers – or 474,445 households – cannot afford basics such as food, transportation, health care and housing.

“At the 16 United Ways across the state, we get a good perspective of what’s going on,” said Richard J. Porth, United Way of Connecticut’s president and CEO. “One observation we have been making in recent months and years is a growing need among working people, middle-class people who work hard but still struggle to get by.”

New Jersey first studied ALICEs in Morris County in 2009. A 2011 study of the entire state found that roughly a third of New Jersey’s households struggle to afford the basics, and that half the jobs in the state paid less than $20 an hour. Compare that to Connecticut, where 51 percent of jobs pay less than $20 an hour. So how do people manage in expensive Connecticut?

Sometimes, they don’t. Sometimes, they double up. And sometimes, they live in dwellings that are substandard, with predictable results. The National Low Income Housing Coalition says Connecticut is the seventh-most expensive state in the country, and that the state’s housing wage – or the amount a worker must earn per hour in order to afford a decent, two-bedroom apartment – is $23.02. The state’s minimum wage, $8.70, is set to rise to $10.10 by January 2017, and that’s still not enough. The state’s average wage for a renter, the coalition says, is $15.75.

But the state’s struggling ALICEs tend to suffer in silence. Rep. Matthew Lesser, D-Middletown, has built a reputation for working with and for low-income residents. But a few years ago, when there was a proposal to remove many families from Medicaid, Lesser heard from just a handful of constituents. A proposal to close the historic Connecticut River ferry got him more emails than any other issue, he said.

“I think a lot of folks feel disempowered,” Lesser said. “They don’t reach out.”

What does that mean to the rest of state residents whose incomes allow them more choices? Plenty.  As Porth says, the study gives a glimpse into how such economic strife affects the larger community.

If families can’t afford food, they rely on charity or SNAP, formerly known as the food stamp program. That’s charity or tax dollars from the rest of us. If families cannot afford housing, there are overburdened entitlement programs that might help – if those families can wait years to be housed. In August,the state opened its Section 8 housing voucher program and its Rental Assistance Program for applicants to get their names on waiting lists. Then the state randomly chose 5,000 names from the first list, and 3,000 names from the second. There, too, are public funds.

The next Connecticut legislative session starts Jan. 7. Lesser says there’s political will to pay attention to economic challenges, particularly those faced by households headed by women. Those issues include fair pay and adequate child care.

“Connecticut is always near the top for all sorts of quality-of-life issues,” Lesser said. “But by some measures, we are the most unequal state in the country.”