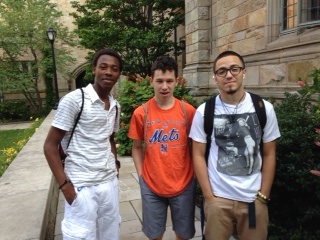 Penning a novel at age 17 is one of the many accomplishments of Dymin Ellis, a senior at Career High School in New Haven. Ellis, who aspires to become an author and major in creative writing in college, already publishes her work on a website for other writers called wattpad.com.

She also enjoys reading, and even though her school is specifically designed for business studies, she’s passionate about her writing.

“It took me three years to write one of my books, and now I am currently working on editing and rewriting the entire thing,” Ellis said.

She won the Elizabethan Book Award recently, and collaborates with other peer writers in a group, where they provide constructive criticism to each other.

For her senior year, Ellis has been accepted into the Educational Center for the Arts, or ECA, which is a specialized school in New Haven for students who focus on such subjects as creative writing, music or dance.

She is also part of The Future Project, a non-profit organization that aims to improve the climate in high schools. Ellis is also the founder and president of an anime club at her high school.

“Without The Future Project, I probably wouldn’t have gotten the guts to seek out an editor, try for ECA, or aspire to publish my work,” she said.

Her dad wants her to continue to develop her strengths in writing and really make a name for herself. As a kid, he too was a writer, but he never published any of his work, which he still counts as one of his biggest regrets, even now in adulthood.

Matt Gad is a student at Amity Regional High School.