It’s been nine years since Eunice Ramirez served in Iraq, but she still suffers from war wounds – post-traumatic stress disorder, depression, respiratory problems and frequent crying triggered by her memories.

Suzanna Smaldone, who also returned home from Iraq in 2005, lives in constant pain and can’t bring herself to talk about her war injuries.

Cheryl Eberg, home from Iraq for seven years, counsels other veterans, but their war stories can trigger her own mental health issues.

Though it’s not unusual for veterans of both sexes to struggle for years with war injuries when they return home, officials say that women veterans have their own unique challenges, which can make their transition to civilian life particularly hard. 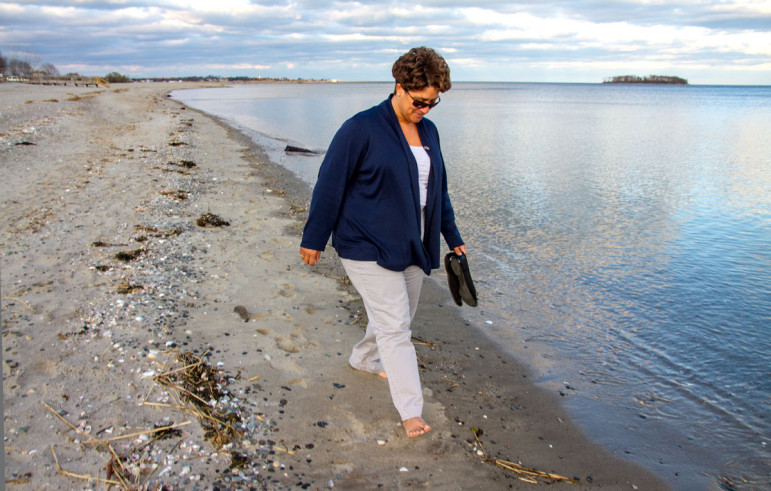 After work, Eunice Ramirez finds comfort in a walk at Walnut Beach, Milford.

“The trauma and complexity of these injuries and disabilities far outweigh anything we can comprehend in the civilian world,” said Linda Schwartz, commissioner of the Connecticut Department of Veterans Affairs.

The federal Department of Veterans Affairs is conducting a long-term study of post-9/11 women veterans who use the VA. The research, which began in Connecticut in 2007, is starting to illuminate some of these challenges.

More women have served in Iraq and Afghanistan than in any previous U.S. conflict. They comprise about 15 percent (205,000) of all current active duty service members and nearly 11 percent (280,000) of those who have been deployed to Iraq and Afghanistan, according to the U.S. Department of Defense. The figures include military sent to the Middle East and South Asia to support the operations. The state VA says that 25,000 Connecticut men and women have gone to these wars, although it doesn’t have a gender breakdown.

The long-term federal study that began in Connecticut now includes veterans throughout New England and in Indiana and is funded through 2018, said Dr. Sally G. Haskell, the West Haven-based director of comprehensive women’s health for the U.S. Department of Veterans Affairs. She said the data will help the VA “develop capacity to provide needed services to women veterans.”

Ramirez, Smaldone and Eberg are among 600 post-9/11 women veterans and 3,000 women overall who use VA’s services in Connecticut. The health problems of the three mirror the federal study’s findings, which show that women vets the VA sees:

• Suffer from depression at twice the rate as men;

• Have greater anxiety and difficulty in readjusting to civilian life than male veterans;

• Suffer from PTSD at the same rate as men;

Significantly, the study also said that 20 percent of women veterans have been victims of military sexual trauma.

PTSD among women veterans tripled from 1999 to 2009, and their care differed from that of their male counterparts, according to a study in the Journal of General Internal Medicine. It found that despite guidelines against prolonged use of potentially hazardous, anti-anxiety benzodiazepines, cases of women being prescribed them increased, while decreasing for men.

“It is possible high rates of distress seen in newly returning veterans from Iraq and Afghanistan may be a reason,” the study said, speculating about inappropriate prescriptions for symptoms like headache, fatigue, chest pain and vertigo. The study also found, however, an increase in recommended and appropriate medications for women with PTSD.

Although both male and female veterans can “require long-term treatment for mental and physical injuries sustained during deployment,” Haskell said that readjusting to civilian life “is more difficult for our women than men. It’s another layer of something that’s tough for them when they come back.”

Roles like parenting small children are a dramatic change from being a soldier, she said. Women find that “a lot of people don’t understand what they’ve been through.”

Ramirez, Smaldone and Eberg still receive treatment for their war wounds. As the VA works to understand and meet the special needs of its female veterans, each of the three women is navigating her own way back to health.

Ramirez, 44, does mindfulness exercises every day “to keep the depression at bay.’’ A combat medic in Iraq, she still cries when talking about treating injured soldiers and holding dying and dead comrades.

At home, she learned quickly that a job as an armored truck driver was a bad fit. One day, she saw a deer carcass on the road and without thinking, she swerved dangerously to avoid hitting it. The move was triggered by her experiences in Iraq, where bombs were often hidden in carcasses. Just as ingrained were her memories of treating and comforting comrades hurt or killed by roadside bombs.

Ramirez said she has to find “safe places” to escape the memories. She finds comfort at Walnut Beach in Milford, which, she said, “brings me back to a happy level where I am not anxious, where I am not angry. Hearing the water, smelling the sea, none of that is in Iraq.”

She fared better cleaning bathrooms at a Norwalk Post Office by day and taking classes at Norwalk Community College at night. “I was too busy to think about anything else and it worked,” said the Stamford native who now lives in Milford. “If you stop and think too long, it brings you back to that bad place.” She had weekly phone sessions with her therapist then. Now, she sees her every other week at the Newington VA.

A National Guard veteran, Ramirez has a feisty personality and drives a pickup truck and a motorcycle. She is a plaintiff in a class action lawsuit against KBR, a Texas defense contractor, which allegedly burned toxic garbage in open pits in Iraq. She blames the open burning for sinus and upper respiratory infections and coughing that gets so bad, it causes heaving.

Like many veterans, Smaldone, 45, of Hamden, is never “pain free.” She was injured in her neck, shoulder, hips, back and lungs, and has migraine headaches, hearing loss, foot problems from combat boots, and lower back pain from driving a truck. Aside from the foot and lower back problems, she wards off questions about the other injuries.

For a long time, she never spoke of Iraq. “Nine years later, it’s just becoming a little easier,” she said. “For eight years, I didn’t talk about it at all.”

Smaldone’s deployment was 10 months. “It’s like a snapshot in my life. And it is that snapshot that has absolutely put a shadow on all my years since and all my years to come,” she said, while sitting in a Hamden coffee shop. “The aftermath and fallout is never, ever, going to go away,” she said quietly.

She said, “It wasn’t all bad.’’ She was a truck driver, combat lifesaver and water purification specialist in Iraq. “I wouldn’t give the experience back,” she said.

Smaldone appreciates “the little things more,” like going to a bathroom without wearing 50 pounds of equipment, sleeping in her own room, choices in grocery stores, making phone calls and time with family.

Smaldone, a registered nurse, received a doctoral degree in nursing practice in May from Quinnipiac University, where she serves on a committee that educates faculty about student veterans. She works as an emergency room nurse at MidState Medical Center in Meriden and has been accepted to do a fellowship at the VA in West Haven. “I can empathize very easily because of what I’ve been through, navigating the system as I did,” she said.

‘Sometimes I Go Back Into My Mood’ 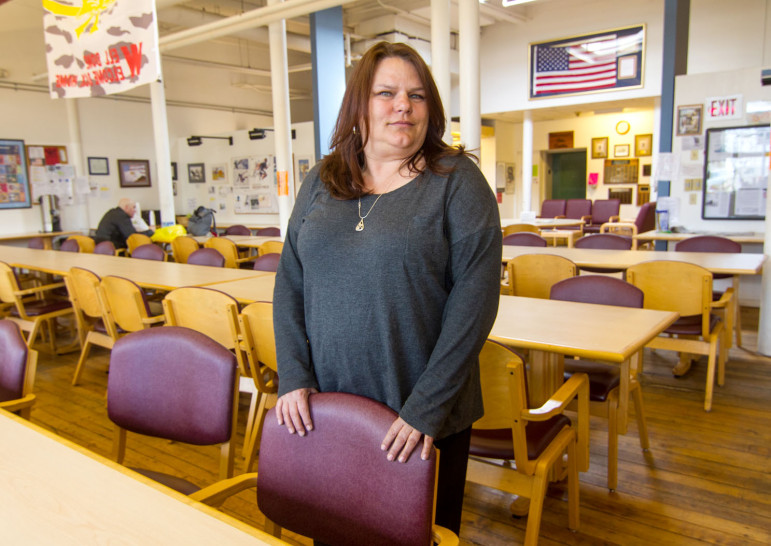 For Eberg, yoga and meditation have helped her to regain her balance and deal with PTSD and depression.

Eberg fell apart, after serving 28 non-consecutive years in the Army and National Guard.

After being in charge of convoys in Iraq, Ebert, 50, couldn’t bear the calm and quiet of civilian life when she came home. She turned to the noise and lights of slot machines, and often spent several consecutive days in a casino while her two children were at home with her husband.

She was at the casino so much that her husband thought she was cheating on him. She stopped answering her phone or taking showers. She was laid off from her Defense Department teaching job because of poor attendance, fell months behind in rent and was only saved from homelessness by financial help from the Supportive Services for Veteran Families Program and the Soldiers, Sailors and Marines Fund.

At one point, she tried to get an appointment to see a VA social worker, but was told that none were available. But a friend she’d met in Iraq persuaded her to keep trying to get help. Eberg called the state Military Support Program, which referred her to a social worker, whom she still sees.

A Wallingford resident, she works at the VA’s Errera Community Care Center in West Haven, where she connects veterans to social services. She graduated in May from Southern Connecticut State University with a social work degree and volunteers three times a week at a housing nonprofit for veterans. She is applying to graduate schools.

“When you think about when I came back and now, there’s an amazing difference,” said Eberg, sitting in her office. But, she admitted, “sometimes I go back into my mood” because the veterans’ stories trigger her own issues.

Ramirez, Smaldone and Eberg had another experience in common from their deployments in Iraq: a constant fear of sexual assault.

“It wreaks havoc with your psyche to never feel safe,” Smaldone said. Women “had to watch our backs with our own people,” keep “a constant vigilance,” and always take a buddy with them to go to the shower or bathroom, she said.

Eberg complained about a superior who converted a unisex lavatory to men-only, forcing women to walk a distance to another one. He also used inappropriate sexual verbal and body language to her.

Ramirez said a superior told her he would make her life miserable if she didn’t have sex with him. She refused. One night, she awoke to discover another male soldier standing next to her cot, fondling himself.

Military sexual trauma among women is associated with PTSD and other mental health issues, substance abuse and physical problems, including liver and pulmonary diseases and obesity, according to the National Center for PTSD.

Dr. Lynette Adams, Women’s Health Coordinator at the West Haven VA, said health providers need to recognize the needs and experiences of women veterans, and one of her priorities is educating them to do that.

They need to understand “the woman veteran’s experience,” she said.