What if you needed a hip replacement and could click through a list of area hospitals to compare costs and outcomes for the procedure?

That kind of transparency of information might go a long way towards improving quality of care and lowering costs, a panel of experts suggested Monday at a forum on health care costs convened by the Universal Health Care Foundation of Connecticut.

“I look at the variance in some of the costs, when we’ve got three or four times the variance in cost for a hip (replacement), for the same hardware . . . Does it really cost four times more from one hospital to another? Probably not, ” said panelist Kevin Lembo, state comptroller. 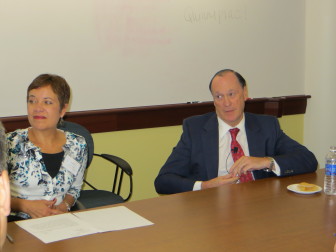 For that to happen, a wall of secrecy built around hospital pricing would have to fall away, said prominent author Steven Brill, whose cover story in Time magazine in February 2013 exposed the arbitrary and largely hidden system of hospital pricing.

Brill, Lembo and Patrick Charmel, president and CEO of Griffin Hospital, all lamented that hospital pricing is largely hidden from consumers – unless they lack insurance and are billed directly for services. Brill’s Time article cited stories from a number of patients who were stuck with astronomical bills for drugs, devices and other services that cost far less outside the hospital setting.

Brill and Charmel noted that prices are set by insurance companies that negotiate with individual hospitals – and require that the pricing remains secret.

“All of us are insulated from the cost of care, and we’re not making true value decisions,” Charmel said.

Brill said that while transparency could help lower costs – by the power of “sheer embarrassment” – high prices are part of a larger system of inflated costs that has non-profit hospitals clearing large annual surpluses, and CEOs, hospital administrators and pharmaceutical company executives taking extravagant salaries.

“Everybody except for the people actually providing the care is just making way too much money,” Brill said.

Meanwhile, he added, more than half of the personal bankruptcies in the U.S. are related “in some major way” to health costs.

Brill said he was struck by the lack of regulation and oversight of hospital takeovers and acquisitions of physician practices, saying, “Why did anyone allow Yale-New Haven to take over so much of the provider industry in this part of the state? How did it happen? Aren’t there anti-trust laws?” 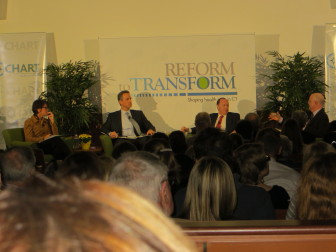 Charmel agreed that high pricing was a concern, but countered that hospitals are “very capital intensive” and need to take in enough money to finance improvements and replace equipment. He took issue with Brill’s claim that hospitals were “gobbling up” physician practices, insisting the opposite was true: That physicians were seeking to align with hospitals for financial reasons.

“Literally, they’re struggling to make a living,” he said, specifically mentioning primary-care providers. “They’ve reached out to hospitals as a lifeline to say, ‘Please, will you take over my practice.’ ”

All three speakers agreed that the argument for transparency in pricing would have to come from consumers, not the medical industry. Lembo said government needs to step up to “drive systems” to lower costs and improve outcomes. He said he was concerned about changes in the care-delivery system, including the emergence of for-profit hospitals.

“I feel in some ways like we are . . . behind this major shift in the marketplace, trying to figure out how to get out (ahead),” he said.  “I feel like something bad is happening to us now, and I’m not sure what it is.”

Brill said that while federal health care reform is extending insurance coverage to people who need it, it also is raising new questions about arbitrary cost and pricing in the health care system. In Connecticut, he said, the costs of insurance in some parts of the state are higher than parts of Manhattan, with little explanation as to what’s driving those differences.

Frances Padilla, president of Universal Health Care, said she hoped the forum, held at Quinnipiac University’s North Haven campus, would begin a discussion about “building a high-performing health care system that meets the needs of all people and is sustainable” over the long term. Other forums are planned in the coming months.

The Connecticut Health I-Team was a media partner for Monday’s forum. The Universal Health Care Foundation has been a funder of C-HIT in past years.