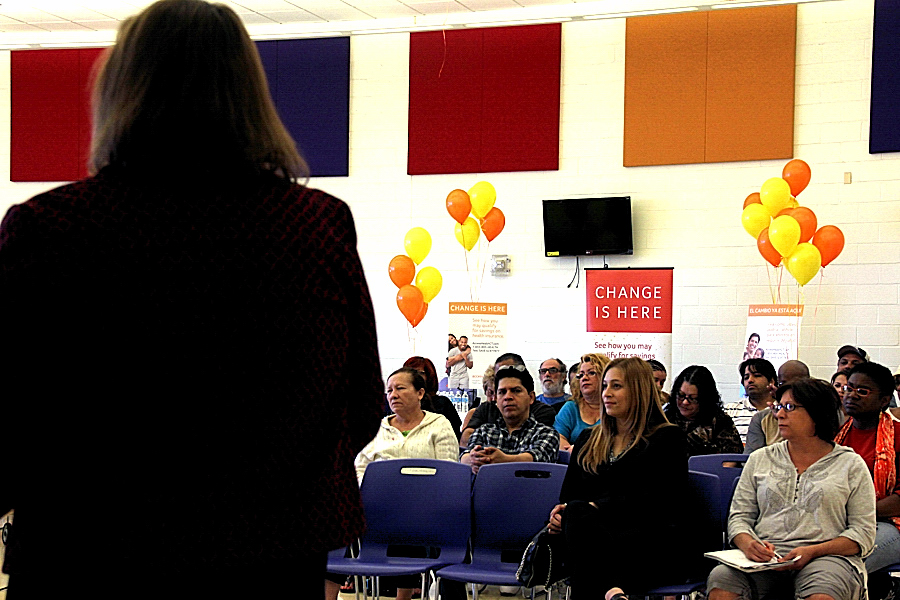 Cheila Serrano knows educating Hispanics who are uninsured and underinsured about the new options available at Access Health CT – the health insurance marketplace that opens for business today – presents a unique set of problems.

But with one in every four Hispanics lacking coverage, Serrano, a program director at Junta for Progressive Action in New Haven, is up for the challenge. Connecticut’s Hispanics represent the fastest-growing, youngest and poorest segment of the state’s population.

Estimates of Connecticut’s uninsured vary. Approximately 344,000 people lack health insurance in Connecticut and 65 percent of the state’s uninsured are minorities, according to data being used by Access Health. Estimates released by the U.S. Census Bureau in September, however, put the uninsured at 284,000.

Yet getting Hispanics to enroll for coverage poses many challenges, said experts, who cited language and cultural barriers, a lack a familiarity with commercial insurance, fear surrounding immigration issues, and an inability to navigate a complex health care system as some of the obstacles they expect Spanish-speaking residents to encounter. Some advocates also worry the $6,000 grants awarded to assister organizations won’t be sufficient to sustain Hispanic outreach during the six-month enrollment period.

Junta for Progressive Action is among the estimated 300 “in-person assister” organizations poised to help Hispanics and others access new coverage through the Affordable Care Act. The assisters are working with six regional “navigator” organizations that will coordinate efforts and offer technical, cultural and linguistic support.

“Lots of people come to our doors asking about health insurance because health care is so expensive. Now we’ll be able to of offer them some real alternatives,” said Serrano. Junta is one of the scores of community agencies statewide that serves as a lifeline to Spanish-speaking residents.

“The widespread lack of health coverage is the most urgent health care problem facing Latinos today. It is a major contributing factor to poor health outcomes and premature death,” said Maritza Bond, executive director of Eastern Area Health Education Center, the navigator for New London County and 16 towns in Middlesex County. “Having health insurance will have a profound impact on quality of life for Latinos.”

The Affordable Care Act requires most Americans who can afford coverage to buy insurance or pay a tax. Access Health begins selling policies to consumers on Oct. 1, with coverage effective Jan. 1, 2014. Residents with moderate and low incomes are eligible for tax credits and subsidies to offset the costs. In addition, some individuals will be eligible for Medicaid for the first time under newly expanded eligibility guidelines.

“The big challenge will be reaching low income families as well as the working poor. Many people don’t realize they may qualify for Medicaid or can purchase subsidized coverage at Access Health. There’s a lot of education that needs to be done,” said Leticia Marulanda, director of programs at the Hispanic Health Council in Hartford. The Council is the navigator for Hartford County and four towns in Middlesex County and is serving as a statewide advisor to Access Health.

Efforts by Access Health to reach Hispanics include hosting a series of “Spanish friendly” Healthy Chats across the state, producing a television series called Mercado De Salud with Univision, and attending community events such as the Puerto Rican Parade. At least a third of the 300 in-person assisters selected by Access Health speak Spanish. Consumers can also view a Spanish version of the Access Health website. Assisters and navigators also received training on cultural competency.

“This is an important opportunity for those who are most disenfranchised,” said Patricia Baker, president and chief executive officer of the Connecticut Health Foundation, which awarded Access Health a $125,000 grant to support grass-roots education and enrollment, with a focus on increasing coverage in communities of color.

“If we don’t target our efforts, we are going to have the same uninsured numbers again,” said Baker. “We need a culturally and linguistically competent and sensitive approach to ensure that Latinos get their fair share. Having trusted people who understand their culture and language will be critically important.”

Dispelling myths about the law and increasing awareness about the benefits have been a top priority among outreach workers so far.  “We need to calm the chatter that’s out there,” said Emilia Skene, an in-person assister recruitment coordinator with Access Health. “There’s a misperception that the rules are punitive. We want to focus on the real benefits that the Affordable Care Act is going to bring to these communities.”

Yet with close to 28 percent of Connecticut’s Hispanics living in poverty, some community advocates fear health insurance will remain financially out of reach for many even with tax credits and subsidies.

“I see affordability as a major obstacle,” said Joan Cruz, director of special projects for the Hispanic Health Council. “It’s hard for people who don’t have a lot of extra money to spend hundreds of dollars on health insurance. There may be months when a family has to decide whether to pay the light bill or health insurance.” Among the hardest hit are individuals who fall between the cracks – they earn too much to qualify for Medicaid, but not enough to receive tax credits and subsidies to shop at Access Health. “What are we going to do with the population that falls in this bracket?” said Cruz. “They still need health care and they still face a penalty if they don’t have coverage. But we don’t have the funding to assist them in any way.”

Some Hispanic families may think twice about exploring the new coverage options because they don’t want to discuss immigration matters, said Yanil Terón, executive director of Center for Latino Progress in Hartford. “They’re concerned about coming forward,” she said. Undocumented immigrants cannot reap the law’s benefits, but their U.S.-born children can apply for HUSKY, the state’s subsidized health program.

Consumers must provide information about citizenship status, income and other matters to determine eligibility for Medicaid or subsidized private coverage with Access Health, but conversations remain confidential. “We want to create a safe environment for families who have people who are eligible for coverage but don’t want to jeopardize an undocumented individual,” said Skene from Access Health.

“There is no punitive immigration follow-up. That is 100 percent not part of the enrollment process,” added Jason Madrak, chief marketing officer for Access Health.

Money isn’t the only factor that may keep some Hispanics from buying coverage and accessing care.

“We need to change the way that Hispanics think about health care,” said Skene. “We want to show how accessing preventive care on a regular basis and establishing a long-term relationship with a physician can lead to a healthier lifestyle and a healthier community.”

“It’s true,” said Cruz, of the tendency by Hispanics to exhaust home remedies and over-the-counter medications before seeking medical care. “We were raised to try to solve these problems on our own. The last thing we want to do is go to the doctor.”

Marulanda worries about connecting Hispanics with services and providers once they have insurance. Given the shortage of primary care physicians, does Connecticut have enough doctors who understand the language and culture to care for the new influx of Hispanic patients? Will Hispanics access health care even if they have coverage?

“These are things we just don’t know yet,” said Marulanda.

Future funding to reach Hispanics is another unknown. According to the National Council for La Raza, outreach efforts will unlikely meet the needs of Hispanics without increased funding to community organizations. A NCLR survey found Hispanic health centers and agencies lacked the resources to carry out the complex enrollment process.

Connecticut’s Hispanic agencies also deserve a larger share of the available outreach funds, said Terón, who questioned Access Health’s “cookie cutter” approach to distribute $6,000 grants to every assister with the goal of enrolling at least 100 people, regardless of the population they serve. “The reality is that it’s significantly more time consuming and complicated to reach the Latino community,” said Terón.

Kate Gervais, manager of navigator and assister programs at Access Health, said distributing the same dollar amount to each assister was the most efficient way to tackle the “huge and complicated task” of funding hundreds of organizations. The number of assisters assigned to each region is based on data on the number of uninsured residents in every zip code. Navigator organizations will receive $30,000 to $50,000 grants, she said.

While many questions persist, for now, all eyes are on the opening of Access Health.

“Everybody was excited and ready to go live. The room was full of energy,” said Milagrosa Seguinot, of a recent meeting between the assister organizations and Southwestern Area Health Education Center, the navigator for Fairfield County. A Puerto Rican native and Bridgeport resident for 29 years, Seguinot is leading the regional effort.

“I feel very positive about this project,” she said. “We are making history.”

For information on the state’s insurance marketplace go here.

For information on the Affordable Care Act go to C-HIT’s health reform watch.