When former Marine Maureen Gard goes running, the flashbacks come: riding in the platoon leader’s car, the jokes about her bra size, the fondling, and the pinning her down.

She was 18 at the time and considered her platoon leader a friend when she went for a ride with him to a mall near their base in Virginia. They were classmates training to be Marine musicians.  He drove fast, her cell phone fell between her legs, he reached down to get it, she said.  He fondled her knees, legs and stomach, drove to a wooded area behind an abandoned building, and climbed on top of her and pinned her down.  He kissed her and kept asking if she liked the encounter.  She resisted his advances and was able to get out of the car, she said. 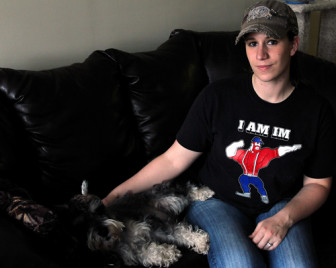 Gard is now 25, a Meriden resident, and a student at Quinnipiac University, who raises awareness about military sexual assault. She gives speeches, writes a blog, runs road races to raise money for victims and for her own “therapy.”

The U.S. Department of Defense (DOD) estimates that 26,000 military sexual assaults among women and men occurred in 2012 — 7,000 more than in 2011. Only 3,374 victims reported military sexual assaults, with 62 percent of those saying they were retaliated against professionally and socially.  Of those who didn’t report, 47 percent told the DOD that they feared reprisals.

Gard pressed charges against her platoon leader. During the military’s investigation, he left the music program, was given another assignment on base and the two still lived in the same complex.    She graduated from the music program and was sent to San Diego, as the investigation continued.  Months later, other female Marines came forward and reported him for sexual offenses. He was dismissed from the U.S. Marine Corps, but didn’t receive a dishonorable discharge.

“Nothing appears in his record,’’ said Gard. “He’s off scot free.’’

Advocates say the time is ripe for new laws and policies designed to help victims, prevent assaults, ensure that offenders are punished, and increase reporting. But they concede that it will be difficult to change the military culture surrounding treatment of women.

Gard said the culture “plays a lot into this whole issue.” She talked about male Marines using the abbreviation WM, which refers to a Woman Marine, to instead mean “Walking Mattress,” implying that a woman receives a promotion by having sex with superiors.

“I don’t think there’s going to be a quick change in the military,” Gard said.

One bill in Congress would remove control of military sexual assault cases from the pertinent chain of command.  U.S. Rep. Rosa L. DeLauro, a New Haven Democrat, is one of 83 co-sponsors.  DeLauro said it would establish “reforms I fear the military cannot make on its own.” It should have been done “years ago,” she said.

The bill would establish an office of civilian and military legal experts to investigate cases, create a reporting method, provide safety to victims, and keep a database from which convictions would be sent to the National Sex Offender Registry.

Another proposal would take the decision away from commanders on whether to prosecute any crimes punishable by sentences of one year or more, not just sexual assault cases.  A military prosecutor would make these decisions under the bill spearheaded by U.S. Sen. Kirsten Gillibrand, (D-NY) and co-sponsored by a dozen other members of the Senate and House, including Democrat U.S. Sen. Richard Blumenthal. Supporters expressed hope that it would encourage reporting of sexual assaults because without the chain of command involved in prosecutorial decisions, fear of retribution may be diminished.

The bipartisan bill would also remove the authority from commanders of overturning or reducing convictions.  In February, an Air Force commander overturned the conviction, prison sentence and military dismissal of an officer found guilty of sexually assaulting a civilian contractor.

In a Federal Court case in New Haven, plaintiffs are seeking data from the military and the U. S. Department of Veterans Affairs relating to sexual assaults. The hope is that information obtained can help determine what new laws and policies are needed, said Michael Wishnie, a law professor who supervises the Yale Law School Veterans Clinic. The clinic is representing plaintiffs who include the Service Women’s Action Network, the American Civil Liberties Union and the Connecticut ACLU.

The Military Rape Crisis Center, an advocacy organization, is urging state legislatures to ensure that their National Guard conduct codes allow for adequate prosecution of sexual assault and proper treatment of victims, said Jennifer Norris, a center victim advocate.  So far, bills have been proposed in two states, Maine and Louisiana. Maine’s bill, a study, would assess such issues as mandatory separation from the Guard of convicted sex offenders, mandatory insurance coverage for abortion in cases of rape, and required sexual assault prevention courses for officers.  In Louisiana, a definition of sexual harassment and assault would be put into its Military Justice Code for the first time.

Nancy Parrish, president of Protect Our Defenders, cited “a pervasive boys’ club mentality” in the military.   She said studies show that “in units where sexual harassment is condoned, women are 40 percent more likely to be sexually assaulted or raped.”

A report in April based on a 2011 Pentagon health survey found that more than one out of five female respondents said they experienced unwanted sexual contact by another service member; and nearly a third of military women with gender-related stress were sexually assaulted while in the military.

At the U.S. Coast Guard Academy in New London, many cadets are afraid they will be retaliated against if they report sexual offenses, said Panayiota Bertzikis, executive director of the Military Rape Crisis Center. The center runs confidential support groups for cadets who have been sexually assaulted. Bertzikis said about 40 women and 10 men attend the groups. The women were assaulted by cadets while most of the men experienced sexual trauma before enrolling at the academy.

Coast Guard Rear Admiral Frederick J. Kenney, testifying recently before a Senate subcommittee, said that the academy has “quite a robust training plan in place for the cadets” on the issue, including a Sexual Assault Response Coordinator and a student group trained to confidentially “accompany a victim to a Victim Advocate.”  Academy Superintendent, Rear Admiral Sandra L. Stosz, declined an interview.

For Gard, running helps her.  It’s “a therapeutic way to be by myself and have my own thoughts. It’s helped me bring back memories so I can work through them’’ and “heal a lot of emotional trauma,’’ she said.

She still has anxiety, and panic attacks – so she carries a knife and pepper spray when she runs.

Her run, she said, will be ‘’ a celebration of overcoming my sexual assault.’’