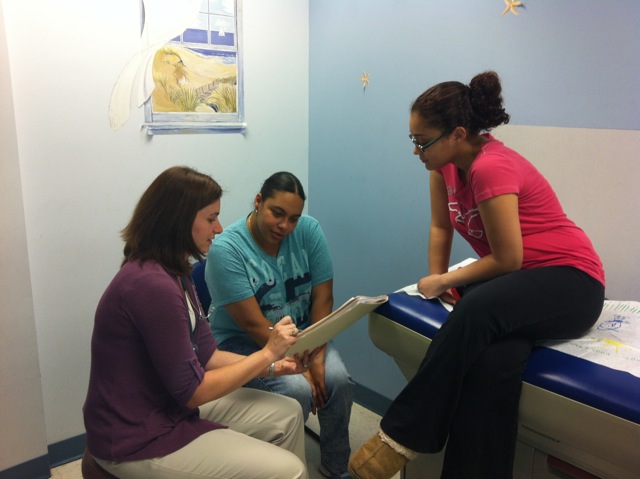 Selenia Velez remembers the near-daily phone calls from the pre-school, alerting her that her 2-year-old son had acted out aggressively and needed to be picked up immediately.

The calls went on for months, as Velez, 27, of Hartford, and her husband bounced between the pre-school and their son’s pediatrician, who recommended that they take him to a psychiatrist for an evaluation. But the psychiatrist was booked and held them at bay, as Velez watched her son’s behavior deteriorate.

“We just felt hopeless,” the mother of four recalls of her oldest son, now 7. “It was one of the most heartbreaking things you can go through as a mother. I was scared of him – I just didn’t know what was going on – and no one had answers.”

The situation is not unusual in Connecticut, where pediatricians too busy to do their own mental health evaluations refer children to child psychologists, who are in short supply. Gaps in the mental health screening and treatment of youths have become a focus of policy makers since 20-year-old Adam Lanza opened fire in December at Newtown’s Sandy Hook Elementary School, killing 20 children and six adults. The American Academy of Pediatrics, citing the need for early intervention, has recommended routine mental health screening, using formal screening tools, for all children and adolescents. In addition, Medicaid rules require that states conduct comprehensive health screenings of Medicaid-insured children that include an assessment of mental health.

But data obtained by C-HIT indicates that only a fraction of children enrolled in the state’s Medicaid program receive a formal behavioral health screening.

In the first six months of last year, fewer than 5 percent of more than 180,000 children ages 4-19 continuously enrolled in the Medicaid program received specialized mental health screenings, according to billing data coded for behavioral screens. The number was highest for 4 and 5 year olds – 1,198 screenings, or 8 percent of the estimated visits over six months – dropping to fewer than 4 percent for children ages 9-14, and less than 3 percent for youths ages 15-19. The data do not include instances where providers might conduct screenings but not code or bill for them.

A 2003 study found that Connecticut was among 35 state Medicaid programs that lacked specialized screening tools for children’s mental health, instead relying on broad screens of physical and developmental issues that briefly addressed mental health. Studies indicate that use of formal tools is better than subjective surveillance in detecting problems. But Medicaid overseers do not specify what qualifies as a mental health assessment, leaving that up to states.

In 2012, the U.S. Government Accountability Office (GAO) found that nationally, 80 percent of children with a potential mental health need did not receive any psychosocial therapy, and over 70 percent did not have any mental health office visits.

In Connecticut, the Center for Children’s Advocacy and other organizations have been lobbying the state Department of Social Services, which oversees Medicaid, to mandate formal mental health screenings at all annual check-ups. Such a requirement already is in place in Massachusetts, where a 2006 court decision mandated that the state Medicaid program conduct regular mental health screenings of children under 21, using standardized screening tools, during well-child visits.

“I think the time is right for this in Connecticut,” said Jay Sicklick, deputy director of the Center for Children’s Advocacy. “We have an infrastructure that can support it,” referring to the Connecticut Behavioral Health Partnership, a state effort to forge a network of community providers serving Medicaid populations.

Some pediatric practices already do routine screenings for mental health.  A handful are piloting a more extensive evaluation – a “mid-level developmental assessment” — in collaboration with the Child Health and Development Institute (CHDI) of Connecticut. At Pediatric Associates of Bristol, on-site mental health professionals from Wheeler Clinic work with pediatricians to assess children and provide services.

At the Village for Families & Children in Hartford, staff members conduct behavioral health assessments of children who have been red-flagged in initial screenings, then provide on-site services or case management for families.  Yale-New Haven Hospital’s pediatric primary care center has a similar program.

“It’s very different from what usually happens, where you might have families waiting a year to 18 months for an evaluation,” said Kim Martini-Carvell, senior director of early childhood and family development programs at the Village. “We’re able to connect most of our kids with services within weeks.” Only about one-fifth of children need to be referred on for further mental health assessments, she said.

Velez considers herself one of the “lucky” parents who didn’t have to face a long wait to figure out what was wrong with her son and get him help. After getting “the run-around” from a psychiatrist recommended by her pediatrician, Velez took her son to the Village, where he was evaluated, treated and placed in a special pre-school program. He is now in first grade at a magnet school, “doing amazing,” Velez said.

Child development experts say that while screening is essential to early identification, it has to be part of a larger effort to expand access to care.

“We need primary-care providers to take on more of children’s mental health needs,” said Lisa Honigfeld, vice president for health initiatives at CHDI. “(But) the real issue for them is, ‘what am I going to do with the kids I screen if I find something?’

“The story here is not just the low rate of screening being done. It’s the lack of opportunities to connect kids to services.”

CHDI has been working to match-up pediatric practices with mental health providers – such as the Bristol practice and Wheeler clinic – in an effort to “get pediatricians comfortable with doing screenings and medication management, where needed,” with support from mental health professionals.

Honigfeld said the child behavioral health system in Connecticut remains fragmented – so much so that CHDI has identified pediatric practices that are “literally across the street from mental health facilities” and not collaborating. To fill the gaps, “We need more providers who are trained in early-childhood mental health issues,” she said. Barbara Ward-Zimmerman, a child and adolescent psychologist who helped to establish the Bristol pediatrics-Wheeler Clinic collaboration, now assists other pediatric practices in developing mental health screening programs, in collaboration with community providers. More than 60 percent of children who screen positive for a mental health issue at Bristol Pediatric Associates are able to receive follow-up care in-house from a Wheeler psychologist and practice physicians, rather than face referrals.

“The pediatric office is the ideal setting to catch a lot of these kids” with anxiety, depression, ADHD and other disorders, Ward-Zimmerman said. “With half of pediatric office visits addressing behavioral health issues anyway, we are saying, ‘formalize the screening, identify the issue, integrate the care.’” She said formal screenings can be less time-consuming than subjective questioning of families and children.

In Massachusetts, Medicaid screening rates have risen from 15 percent to 65 percent, according to the most recent data. Every child who is found to have a potential mental health condition must be either treated by the primary-care provider or referred to a mental health professional for an evaluation.

Massachusetts has expanded its home-based and community mental health services to try to accommodate children identified through screening, although a 2012 report found that many families still cited long waits for treatment. The state also has a Child Psychiatry Access Project consisting of regional teams of child psychiatrists and care coordinators available for telephone consultations with pediatricians about mental health problems, including the prescribing of psychotropic drugs. Connecticut is considering a similar program.

While federal Medicaid officials haven’t required states to adopt formal screening, they issued an “informational bulletin” to states in March that stressed: “Numerous validated screens are available for use by medical professionals, and extensive research has proven them effective.”

Honigfeld and other child advocates say that while formal screening is important, it is pointless without expanding treatment options. Connecticut has a shortage of child psychiatric specialists, and services are “very splintered,” Honigfeld said.

A 2010 statewide survey found that 84 percent of Connecticut pediatric providers cited a lack of psychiatric specialists as a barrier to referrals. Earlier this year, Dr. Yann Poncin, medical director of the Children’s Psychiatric Inpatient Service at Yale-New Haven Children’s Hospital, testified to a legislative committee that the hospital’s emergency room was “flooded with children sent to us by schools, families and the police for psychiatric evaluations.” At times, he said, “we admit children who require acute psychiatric care to medical pediatric floors as they await a bed in a psychiatric unit” – a practice he called “unacceptable.”

In January, the state Office of the Healthcare Advocate issued a report deeming the mental health system “fragmented” and the workforce “insufficient.”

At Pediatric Associates of Bristol, Dr. Julie Schiff said she understands the reluctance of some pediatricians to take on mental health screening and triaging – especially given the shortage of psychiatrists available for referrals. But she said the practice’s physicians, who work closely with Wheeler specialists, are comfortable handing some behavioral health problems.

“Co-locating (behavioral health) in primary care has worked well for us,” she said. “The anxiety about, ‘what do I do with a positive screen?’ isn’t an issue, once you know there are resources there.”

Honigfeld said she is hopeful that more pediatric providers will take on basic mental health screenings and follow-up.

“We need primary-care providers to work at the top of their license and save those scarce (psychiatric) resources for kids who need them,” she said.