Laundering shop and print towels, which are cloths used to wipe oil, solvent and other chemicals off machinery can fuel the release of VOCs above federal limits.  The use and processing of shop towels is largely under-regulated, despite its potential to emit toxic substances into the air.

When the DEEP uncovered the chemical release violations at G&K, it alerted the U.S. Environmental Protection Agency, which launched its own investigation into all industrial laundries in New England.

“Based on EPA documents, this appears to be an issue that has been missed for a long time,” said Steven Rapp, chief of the Air Technical Unit, EPA Region 1.  “It’s a complete sleeper.”

So far, the EPA’s ongoing probe has identified and inspected 17 industrial laundries in New England, including UniFirst in Stratford and AmeriPride in Hartford, that process shop or print towels. 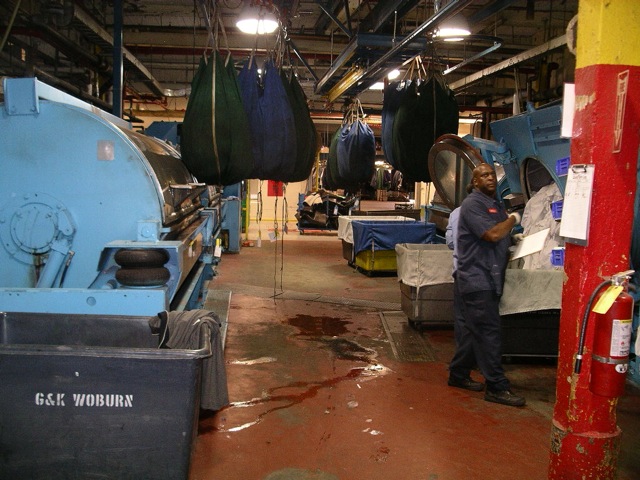 Another company, Cintas in Branford, was processing shop towels when the EPA inspected them in 2010, but no longer launders shop or print towels in Connecticut, according to a company spokesperson. The EPA has brought action against two other facilities – G&K Services in Manchester, NH, and Coyne Textiles in New Bedford, MA – for violations of the Clean Air Act, and has ordered testing of others.

The state and federal investigations have also exposed a potentially bigger problem: the spotty oversight of chemical-laden shop towels as they travel from factory floor to washing machine.  The EPA and the laundry industry disagree on who bears liability for VOC emissions along this supply chain, with the EPA targeting laundries and the laundries pointing at customers.

“We don’t always know what’s arriving at the laundry, because these companies use different chemicals,” said Joseph Ricci, the president and CEO of the Textile Rental Services Association of America (TRSA), which represents the laundry industry.  “So the customer is ultimately liable for what’s on the towel.”

This poorly regulated process can lead to a mix of incompatible chemicals at the laundry, creating additional risks for human health, the environment and fire, according to state and federal officials.

“If you don’t know what’s in there it could be hazardous,” said EPA’s Rapp. “There have been explosions at these types of facilities.  We’ve heard reports of fires in the washing machine when the washer is going.  What are you ignoring when the water is on fire?”

Air Pollution From A Laundry

From October 2006 to October 2007, G&K in Waterbury produced an estimated 180 tons of VOCs, 130 tons over the legal limit. This made G&K the largest emitter of VOCs in the state, more akin to a hazardous waste processing facility than a laundry.

“I’ve been here 25 years.  I’ve been in enforcement my whole career.  This is by far the worst case I’ve ever seen,” said Robert Girard, assistant director of the Air Enforcement Program at CT DEEP.

“It was a total surprise to us that an industrial laundry would be a source of VOCs,” said Gary Ginsberg, senior toxicologist at the Connecticut Department of Public Health.

VOCs are chemicals that evaporate quickly, and many common products, like paint thinner, contain them. VOCs range from innocuous to toxic, but because they evaporate rapidly people are likely to inhale them.

When Ginsberg analyzed the emissions from G&K, he found that they posed a potential threat to public health, especially for vulnerable groups like children and the elderly.  Many organic solvents irritate the skin and eyes, and can cause nausea, dizziness and headaches. Long-term exposure can damage a person’s kidneys, liver and respiratory system.

Most troubling at G&K were high concentrations of two particular chemicals: hexachlorobutadiene, a carcinogen that Ginsberg describes as a “very active toxin,” and isophorone diisocyanate, a highly irritating chemical that causes lung and eye damage.

Waterbury resident Marie DellAnno, who lives across the street from G&K and alerted DEEP to the odor, said the smell – like lighter fluid, “but a thousand times worse” – made her dizzy and nauseous. “A smell like that, it comes after you and grabs you,” she said.

Facilities that launder shop towels have special processes to remove the VOCs, though techniques vary by company. At G&K, washing machines blasted the towels with steam, vaporizing the VOCs, which could then be collected in condensers and disposed as hazardous waste.  But G&K never connected the condensers, instead simply venting the vaporized VOCs outside, according to DEEP records. 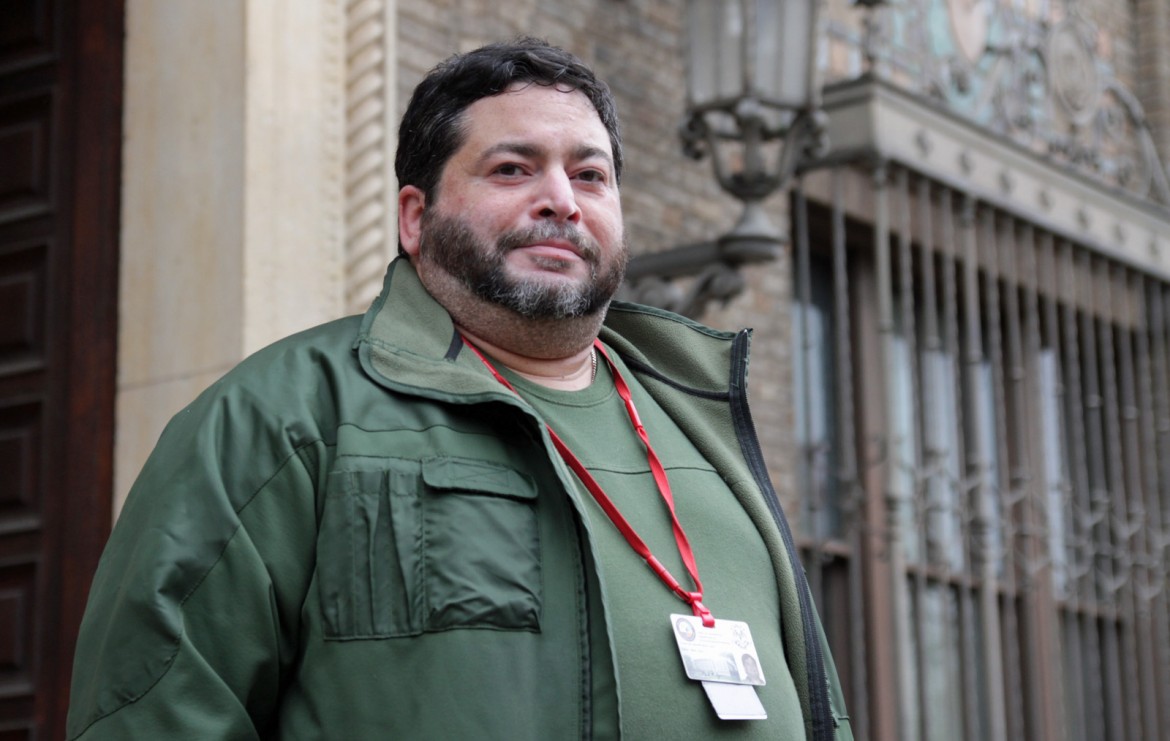 Spiro, during the emissions testing, discovered that towels unloaded from G&K washers still “reeked’’ of solvent. When workers put these towels into dryers, the remaining solvent was vaporized and vented through the roof, he found.

Though there are no national standards for handling shop and print towels, most states follow some form of the “one drop” test: if a shop or print towel is dripping wet with solvent, oil, paint or other chemicals, a factory must treat it as hazardous waste.  Otherwise, it can be washed, dried and re-used.

According to TRSA’s Ricci, delivery truck drivers should never accept dripping shop towels from a customer. “If they’re wet, they have to leave them there.” said Ricci. “I would think that it rarely, rarely happens.”

But DEEP inspectors found the “one drop” test was being ignored at G&K.   DEEP inspector Lou Santos saw workers taking huge slings of dripping wet shop towels, squeezing them in a press to remove excess liquid, and storing the chemical mix in an open-air pit.

“The operation in its entirety lacks oversight and regulation,” said DEEP’s Girard.  “It slipped through the cracks.”

EPA started its probe at G&K’s facility in Manchester, N.H., and found that the facility needed additional permits and better controls to reduce VOC emissions. In September 2011, the facility agreed to install new emission controls and pay a $65,000 fine.

TRSA, the industry trade group, has expressed concerns about the EPA’s testing requirements.  TRSA noted that the EPA calculates potential – rather than actual – VOC emissions, which could give a falsely high count.  While the EPA says this standard is required by law, Ricci says TRSA is working with the EPA to develop an “emissions factor” that will better reflect actual VOC emissions.

According to EPA records of a July 2011 inspection, AmeriPride in Hartford launders shop and print towels about every other day, accounting for 4.1 percent of its business. The facility sits in Hartford’s south-end, adjacent to a small apartment complex, and across the street from a restaurant and J&P City Tile.  Peter Aiello, the owner of the tile shop for 28 years, says he never noticed any odors coming from the laundry, and describes them as “good neighbors.”

The EPA’s 2010 inspection report of UniFirst in Stratford notes only that it launders “some” shop towels, but the report noted a UniFirst employee saying that a customer had recently included a bottle of used solvent in a bag of dirty towels.  The UniFirst employee told inspectors “some people pour the solvent on the cloths to get rid of it.

The EPA declined to say whether it would issue violations to any additional New England laundry facilities, citing the ongoing investigation.

No New England states currently track the use of shop and print towels, though Maine tracked them from 2005 to 2011.  “I didn’t see much value in it,” said Julie Churchill, the small business ombudsman at Maine’s Department of Environmental Protection. “You couldn’t determine the total volume of solvent based on the number of wipes.” Churchill also said that some businesses, finding the tracking policy too complicated, just treated all towels as hazardous waste.

Instead Maine adopted the “one drop” test, which is enforced by the Maine DEP. “You’d think the laundries would be keeping on top of it,” said Churchill.  “It could be a big liability for them.”

Even if towels aren’t dripping wet, they can still be heavily laden with solvents.   Since drivers don’t have to transport the towels in airtight containers, the towels are likely emitting VOCs from factory door to distribution center to loading dock.

Sikorsky Aircraft Corp. of Stratford used cloth shop towels until about 10 or 15 years ago, when they decided to take a closer look at the process.

“This is not a controlled system,” said Robert Araujo, Sikorsky’s manager of Sustainable Development and Environmental Health and Safety.  “If you had a contaminant on a shop towel, say isopropyl alcohol, was that being treated the way it should be treated?  If you wipe oil off a machine, where does that oil go at the laundry?”

Sikorsky decided that cloth towels were “a risk to our company and a risk to the environment” and switched to more expensive pre-moistened disposable towels, according to Araujo.

“When the towel is spent, it goes into the proper waste stream,” said Araujo.   “We know exactly where it goes.

TRSA’s Ricci agrees that the entire VOC waste stream needs better management. He says that TRSA is working with the EPA to draft a voluntary “VOC stewardship” program to reduce VOC use throughout the supply chain.  So far, says Ricci, major customers like the Automobile Dealers Association and the Printing Industries Association have expressed interest.  “I think everybody wants to try to reduce our impact on the environment,” he said.

This story was supported by grants from the Fund For Investigative Journalism and the Society of Environmental Journalists.