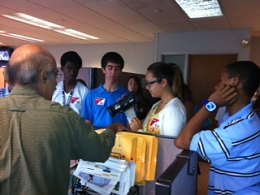 Angelica tries out a video camera during our field trip to the Hartford Courant.

The majority of girls in Connecticut who are committed to the state for delinquency or placed on juvenile parole have diagnosed trauma or psychological disorders, according to data from the state DCF Bureau of Juvenile Services. Angelica tries out a video camera during our field trip to the Hartford Courant.

Statistics show that 52 percent of troubled girls suffer from a traumatic disorder, including PTSD, sexual, mental or physical abuse, or neglect. Girls who suffer from severe trauma often abuse drugs and alcohol, research has shown. They also suffer from depression and may have attempted suicide.

Almost 90 percent of troubled girls who are committed to the Department of Children & Families or placed on parole suffer from psychological disorders, including schizophrenia, mood disorders, dementia or delusional disorders, according to the data, which dates from 2009. Susana and Angelica working on their story.

RoseAnne Bilodeau, executive director of Pathways/Senderos in New Britain, said that trauma often is caused by abuse or exposure to violence.

“There are a vast number of traumas—in the home life, any type of domestic violence (or) violence in the household, not only directed at the individual, but at a family member also… Anything that impacts a person’s stability and well-being” can cause trauma.

Abby Anderson, director of the Connecticut Juvenile Justice Alliance, said there are a number of reasons why a girl with trauma could end up in trouble.

“It can make concentration difficult, make it difficult for a girl to appropriately process anger, make her less likely to go to school, etc,” Anderson said.

Many times, girls may show signs of traumatic disorders, but parents may not pay attention to these signs or seek help for their daughters.

“Running away happens a lot, which brings the girl in touch with the system as a status offender, or they might be under the care of DCF as abused or neglected, but not like the facility they are put in, so run from there,” Anderson said.

When girls live in an environment where they experience trauma, counseling can be effective, Anderson and Bilodeau said. But access to counselors may be difficult.

“In a community like New Haven or Bridgeport or others, a child might often hear shots in the neighborhood (or) have a friend or relative killed or arrested,” said Anderson. “And there aren’t enough counselors in the schools to deal with that for the kids – and it becomes ‘normal’ for the kids to have lots of experiences like that.”

The problem isn’t confined to Connecticut: A number of studies have found that the majority of girls arrested have traumatic or psychological disorders. In 2002, a study by researchers at Northwestern University Medical School found that nearly three-quarters of girls, ages 10-18, arrested in Cook County, Illinois, were diagnosed with one or more psychiatric disorders. The researchers said, “Our study shows that youth with psychiatric disorders pose a challenge for the juvenile justice system, and, after their release, for the larger mental health system.”

There are a handful of intervention programs in Connecticut dedicated exclusively to troubled girls. Most serve both boys and girls.