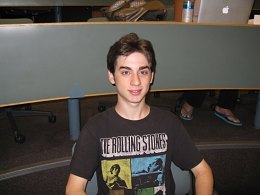 Leo at the Quinnipiac camp.

Connecticut’s 2010 Raise the Age law, which shifted 16-year-old offenders from adult court to juvenile court, has helped to reduce the recidivism rates among juveniles by 7 percentage points, according to data provided by the Connecticut Juvenile Justice Alliance (CTJJA).

Leo at the Quinnipiac camp.

Recent reports show that more than 83 percent of 16-year-olds completed probation without re-arrest since the law took effect Jan. 1, 2010.

Supporters of the law say that while the change has cost the state millions of dollars upfront, it will save money in the long-term by reducing re-arrests and the associated social costs. That reduction in recidivism is a major goal of a second Raise the Age law that took effect in July, which will treat 17-year-old offenders as juveniles.

“The difference between the juvenile system and adult system is that we actually produce (rehabilitative) programs in the juvenile system, whereas the adult system is more focused on punishment,” said Abby Anderson, executive director of CTJJA. Anderson’s organization has been working to get Raise the Age bills enacted in the state legislature since 2005. This summer, Connecticut joined 38 other states in treating youths under age 18 as juveniles in the justice system.

The debate over where criminals under18 should be prosecuted has been churning for decades. Transfer laws designed to move the worst juvenile offenders to adult courts have been around for years. In the 1980s and into the ‘90s, during a national “get-tough-on-crime” push, states enacted laws lowering the age of juveniles eligible for transfer to adult courts. But studies done at the time, including one authored by Columbia University Law Professor Jeffrey Fagan, found that underage teenagers tried in adult court had significantly higher recidivism rates than teenagers tried in juvenile court.

Connecticut has not yet completed a study that directly compares re-arrest rates of 16-year-olds prosecuted as adults to those treated as juveniles. But data collected by CTJJA shows a 49.3 percent, 12-month recidivism rate among juveniles in 2009, which decreased to 42.3 percent in the fourth quarter of 2011—a drop that Raise the Age advocates believe is partially fueled by the change in law.

Kate (at right) works with Leo and Rachel.

Anderson said research has shown that “so-called tough-on-crime policies are counter-productive.” Changes related to the Raise the Age initiative include more individualized services for 17-year-olds, such as substance-abuse interventions, community service, and staff training in coping with adolescent development, according to a June report on the Judicial Branch’s Raise the Age activities.

Before the 2010 law was passed, the state’s Office of Fiscal Analysis had estimated that the change would cost the state about $100 million a year. But some of those costs have been avoided because court referrals have remained at historic lows. From 2005 through 2010, there has been a 24-percent drop in new juvenile court cases, data shows.

Anderson said that while expenses may seem high to start with, the benefit of providing rehabilitative services to youths and preventing future crimes would offset the costs.

“If you invest a little bit in these kids, you’ll be able to save money in the backend,” she said.

“One of the things people were surprised but pleased to see was that 16-year-olds were responding to rehabilitative techniques,” she said.

Even with Raise the Age changes in place, juveniles charged with class A and B felonies are still treated as adults. Class A felonies are the most serious crimes—such as murder, rape, aggravated assault and kidnapping—while class B felonies include crimes such as assault, larceny and robbery.

“No question, we still do have kids who end up in the adult system through transfer laws,” Anderson said.

Leo Weinreb is a junior at Wilbur Cross High School and the Educational Center for the Arts, New Haven.