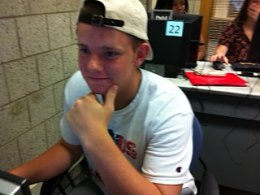 Rob McCarthy grew up on a basketball court.

He has been playing the sport since he was four.

He plays shooting guard for Cazenovia High School in New York state, where he averages 12 points per game and was named Most Valuable Player last season.

“Sometimes it’s intimidating when some kids you play against are taller than you,’’ said McCarthy, who is 5-foot-10 inches.

Off the court, he likes watching his favorite player, Ray Allen, who played for the Boston Celtics and has won a championship. Allen also played at the University of Connecticut from 1993 to 1996, finishing third on the all-time Huskies’ scoring list.

McCarthy, an only child, was born in Windham, CT to parents Kevin and Patti McCarthy. At the age of three, McCarthy moved to the Syracuse area.

McCarthy also likes to play baseball, and his favorite player is Dustin Pedroia of the Boston Red Sox. He also enjoys eating Mexican food and watching his favorite movie, “Borat.”

Arianna Vernon is a junior at the Weaver High School Journalism And Media Academy, Hartford.