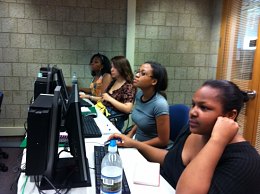 It is late into the night and Keylee Scott is busy looking up the latest entertainment news.

“I get no sleep sometimes because I feel like I might mission something,’’ said Scott, who will be a sophomore this fall at the Journalism and Media Academy at Weaver High School in Hartford.

Her ideal way of being on TV is as an actress where she can use her uncanny ability to cry on cue, a skill which she has used on occasion to fool her friends. Scott has also considered modeling and fashion as a way to get on the small screen.

She plans to showcase her skills by going to one of her dream colleges, such as Julliard, New York University or Harvard University.

Her work ethic is an advantage, she said.

In her free time, she volunteers for several organizations. Recently, she was involved in a row-boating event on the Connecticut River.

She was born in the Bronx, NY and moved to Hartford with her brother Lynval and sister Tanaka when she was in second grade. They have since moved back and forth again.

Scott hopes to move permanently to California, a place she has never been, where she can start her television career.

“I have seen a lot of things online about events in California,’’ she said, citing one of the reasons she would like to move to the Golden State.

She plays on her school’s volleyball and tennis teams at the varsity level.

“It took me a while to get used to tennis,’’ Scott said. “If I put my head up to it and work in the summer, I can [move up to] the one or two doubles team.”

Scott is very interested in her craft. She even said, “Acting is my soul.”