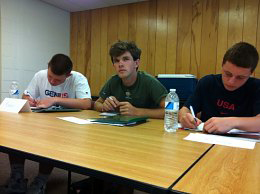 That trend has shifted in the last 20 years, as juvenile crime has dropped by about 30 percent nationally. In Connecticut, juvenile court cases have been dropping steadily, leveling off last year due to the addition of 16-year-olds into the juvenile system. But the trend of a declining juvenile crime is expected to continue. Abby Anderson, director of the Connecticut Juvenile Justice Alliance, attributes the decline to state intervention programs such as Families with Service Needs (FWSN) referrals, which are an alternative to prosecution for youths who commit non-violent crimes, such as truancy, defiance of school rules, or engaging in immoral or indecent conduct.

“This helps to catch problems before they get horribly bad, to try to reverse the course from FWSN to delinquency,” she said.

Juvenile justice experts say the state’s emphasis on diversion programs has contributed to the decline in arrests. Juvenile Review Boards are community-based programs in which, when youths are arrested for certain offenses, they can admit guilt and go before a board of community members, instead of the courts. The boards are “based on a restorative justice model, for the most part,” Anderson said; they allow youths to make an apology to the victim, police or parents and perform community service, while also receiving services, such as mental-health treatment. If the child fulfills his or her obligation, the record is expunged.

Anderson said review boards had greatly expanded in the past five years, including in Bridgeport, Hartford and New Haven, “and this makes a big difference.”

Connecticut’s decline in juvenile crime comes despite a slumping economy, which experts say fuels certain types of crimes, such as burglary and petty theft.

Nationally, experts differ on how big a role the type of punishment plays in reducing the incidence of crime. Some say there is no strong correlation between the punitive strength of the juvenile justice system and the extent of criminal involvement by young people later in life. Others say intervention, rather than just confinement, is critical to preventing future crimes.

Johnny Gustafson is a sophomore and Patrick Cox a senior at the E.O. Smith High School, Storrs.