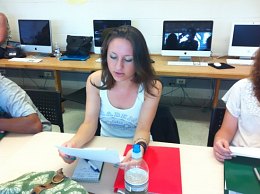 Some of the highest-paid women in the country work in Connecticut—but for every 76 cents they make, their male co-workers earn one dollar. According to U.S. Census reports, women in the Northeast earn more per week than women in other regions. The data shows that women in Connecticut and Rhode Island, for example, earn over $800 per week, where women in Arkansas earn just over $500.

But in Connecticut—depending on where you work and what job you have—the wage gap can be larger than 24 percent.

In April, Forbes.com reported that the city of Stamford has the worst pay equity in the United States—where women are making only 46 percent of men’s salaries who do the same job. At that rate, women are earning less than they did in the 1970s, data shows.

“Stamford has a high level of insurance employment,” said Ariane Hegewisch of the Institute for Women’s Policy Research, who was able to provide some insight on the data. Taking a break: Victoria and Julia.

There doesn’t seem to be any distinct trend towards closing the gap in Connecticut just yet, but the state government has been taking the right steps. In 2009, they passed a law concerning “equal pay for equal work”.

A similar bill, called “The Paycheck Fairness Act”, was proposed by the Congressional Democrats in June, but was struck down in the U.S. Senate. The bill gives more fighting power to women who face wage discrimination, requiring employers to prove that differences in pay are not related to gender.

“Congress needs to pass the Paycheck Fairness Act—and now,” said Teresa Younger, executive director of the Permanent Commission on the Status of Women. And her advocacy for fairness in the workplace extends beyond pay.

Younger said, “Both federal and state policies need to recognize women who take time out of the workplace to care for family.”

“Connecticut has taken great steps with passing bills to provide sick days, at least for some of its workers,” she said.

The wage gap tends to be greater in certain occupations than in others. Women often make a smaller percentage of men’s salaries in financial work and managerial or executive positions—Hegewisch cites Wall Street as an example.

“Anything where a lot of bonus payments are involved and merit increases tends to encourage discrimination, unless it is carefully monitored,” added Hegewisch.

Statistics by the PCSW which list the pay gap by occupation show a 23 percent gap for accountants and auditors, a 25 percent gap between male and female lawyers, and a 29 percent gap in medical professions.

Women hired in traditionally male-dominated fields, such as agriculture and construction, will see pay gaps of only 8 percent and 15 percent, respectively, data from the Bureau of Labor shows.

“The wage gap is lowest in technical occupations,” said Hegewisch, “and in federal government, [where there is a] tradition of transparency and unions.”

However, Younger insists that occupation has no correlation with pay inequality.

“Regardless of pay grade or career field, women, on average, earn less than their male colleagues.”

Younger has some advice for women looking to stand up for their rights to wage equality. Learning how to discuss money, she says, is key.

“One big mistake women make in a job interview is to allow the interviewer to set the tone by asking what the interviewee’s previous job paid,” she said.

“That’s not the point. The question to ask is: how much did the person before me in this job make?”

Julia Gottier is a 2012 graduate of Tolland High School.