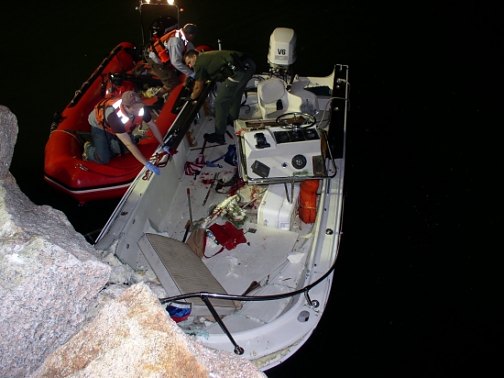 Investigators examine boat operated by Arthur K. Hall that crashed into a seawall, killing a passenger and injuring two others in 2009.

On Sept. 3, 2009, four friends from Guilford took a Boston Whaler out for a sunset cruise near the Thimble Islands on Long Island Sound. Only three would come home. The boat crashed into a seawall, killing 24-year-old passenger Jonathan Cook and seriously injuring two others. The 25-year-old driver admitted he had been drinking before the accident.

Three days later, Michael Krupa, 22, of Middletown, disappeared beneath the waves after he and a friend took a kayak out in rough seas near Milford.  Officials reported that Krupa had been drinking at a beach party just before paddling to Charles Island.

The accidents occurred over the 2009 Labor Day weekend, during an unprecedented four-year jump in alcohol-related boating deaths in Connecticut. A C-HIT review of data has found that the number of Connecticut boating deaths involving alcohol increased nearly fourfold in the latter half of the last decade. And while the state’s rate of deaths where alcohol was a cause exceeded the national average in the last decade, the state has fewer enforcement officers today than it did 10 years ago, does not mandate the wearing of life jackets on all boats, and is hampered in its ability to test boaters for sobriety on-the-spot.

FIND OUT WHICH LAKE HAS THE MOST BOATING ACCIDENTS HERE Investigators examine boat operated by Arthur K. Hall that crashed into a seawall, killing a passenger and injuring two others in 2009.