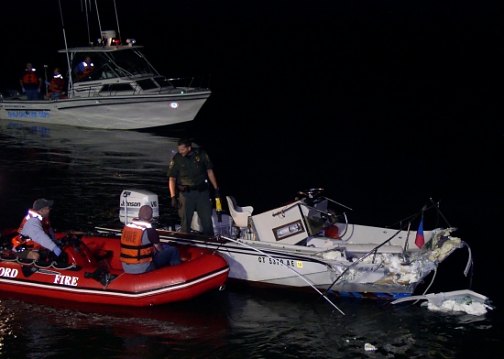 Investigators at crash site of the 2009 fatal boating accident in Long Island Sound.

On Sept. 3, 2009, four friends from Guilford took an 18-foot Boston Whaler out for a sunset cruise near the Thimble Islands on Long Island Sound. The fun night turned tragic when the boat crashed into a seawall, killing 24-year-old passenger Jonathan Cook and seriously injuring two other passengers.

Three days later and 25 miles away, Michael Krupa, 22, of Middletown, disappeared beneath the waves after he and a friend took a kayak out in rough seas near Milford and capsized sometime after midnight.  Officials reported that Krupa had been drinking at a beach party just before paddling to Charles Island. Neither he nor the other paddler, who swam to safety, was wearing a life jacket, and there were none in the kayak, the U.S. Coast Guard reported.

Earlier this month, Hall accepted a plea bargain that prosecutors say will send him to prison for 3½ years.

Both accidents occurred over the 2009 Labor Day weekend, during an unprecedented four-year jump in alcohol-related boating deaths in Connecticut.

A C-HIT review of state and U.S. Coast Guard data has found that the number of Connecticut boating deaths involving alcohol increased nearly fourfold in the latter half of the last decade. The data shows that while there were six alcohol-related boating deaths in Connecticut from 2001 to 2005, that number jumped to 22 from 2006 to 2010. The worst single year was 2008, when seven people died, including two double fatalities.  From 1999 through 2006, no year had seen more than two such deaths.

More than 47 percent of all boating deaths in the state from 1998 to 2010—36 of 76 – had what the Coast Guard calls “alcohol involvement, ” indicating that alcohol had been consumed by a boat’s occupants before the accident, C-HIT’s review found. In 2010, five of six deaths involved alcohol.

Connecticut’s rate of boating deaths where alcohol was an actual cause exceeded the national average in the last decade. A full one-third of all boating deaths in the state cited alcohol as a “contributing factor,” indicating a direct or indirect cause. Nationally, drinking was reported as a contributing factor in just one in five fatalities, the data shows. The Coast Guard cautions that higher rates for some states may indicate better reporting, rather than higher alcohol involvement.

The review also found that none of the 34 people who died in drinking-related accidents from 1998 to 2010 was wearing a life jacket. And more than one third of all boating deaths in Connecticut linked to alcohol since 1998 involved non-motorized craft – canoes, kayaks and rowboats.

While Connecticut has taken steps to crack down on alcohol-related incidents, including passing a law in 2009 that toughened penalties, the state does not mandate the wearing of life jackets on all boats, and enforcement officers are hampered in their ability to test boaters for sobriety on-the-spot, without taking them to shore.

Also, while the number of boating accidents investigated by the Department of Energy and Environmental Protection (DEEP) has tracked upward over the past five years, its staff of enforcement officers and investigators dropped 20 percent over the past decade, officials said. 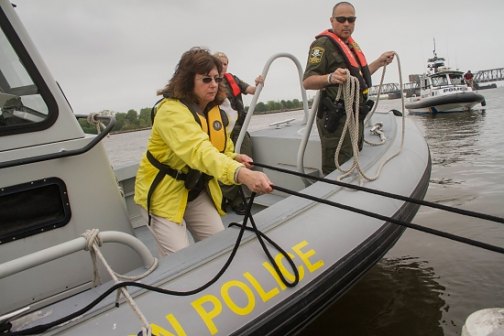 DEEP boating officials say they became concerned several years ago about the dramatic rise in boating deaths involving alcohol. Since then, the agency has initiated stricter enforcement and public education campaigns to discourage drinking while boating, said Eleanor Mariani, director of the DEEP’s boating division.

“For the longest time, being out on the water was an extension of ‘it’s time to drink,’ ” said Mariani.  “We’re trying to change that mentality.”

Records show that none of nine boating deaths in 2011 was alcohol-related—but Mariani said it would be premature to credit tougher laws and stricter enforcement for the drop.

“We’re tracking it and hope we’re making a difference, but it’s too soon to tell,” she said.

Drunken boaters run a much higher risk of crashing, capsizing or falling overboard, officials warn. Alcohol can impair both operators and passengers, affecting judgment, balance, vision and reaction time. Sun, wind, noise, and even vibrations on the water can intensify the effects of alcohol and drugs.

In Connecticut, the dangers of boating and alcohol came into sharp focus —and led to tougher laws—in July 2007, when Susan Brandes, 53, of South Windsor, was killed as she lay on the deck of her 16-foot sailboat. Brandes and her husband, Leland, were sailing on Long Island Sound off Old Saybrook when a runaway 20-foot motorboat struck their vessel. The accident also resulted in the partial amputation of Leland Brandes’ right hand, as well as injuries to two other passengers.

The motorboat operator, Gregory Siege, then 44, was boating alone when he fell out of his 200-horsepower outboard, a DEEP investigation found.  Siege, of Madison, tested with a blood-alcohol level of .17, more than twice the legal limit. He was charged with second-degree manslaughter and boating under the influence of alcohol (BUI).

Siege accepted a plea agreement in 2009 that included a prior charge of driving a motor vehicle under the influence of alcohol. He is serving a four-year prison sentence, to be followed by five years of probation.

Paul Berg, a Simsbury resident who witnessed the accident from his boat and stayed at the scene to help the victims, still becomes emotional when he recalls seeing “a giant red pool” surrounding Brandes as he held his wife.

“It was really devastating,” Berg said.  “I just hope he never has to remember what happened to her.”

Leland Brandes, now 73 and remarried, said he remembers little about the accident.  He said that despite his loss, he believes something good came from the tragedy—the 2009 state law that toughened penalties for boating under the influence.

Siege, who is scheduled for release later this year, declined a request for an interview.

The laws that came out of the accident include a 2008 provision that allows police to charge an operator with boating under the influence, even if a sobriety test is administered outside the standard two-hour window.  Because Siege had been tested 10 minutes after that two-hour limit, he had been able to contest the BUI charge in court, DEEP officials said.

“We lost a few good cases because we couldn’t get the people in fast enough” for testing, said Mariani.

The 2009 change in the law imposed tougher penalties for boating under the influence when a death results. Before the law change, a boater could be fined between $2,500 and $5,000 and sentenced to up to two years in prison. Now, drunken boaters can be charged with second-degree manslaughter, a class C felony, face fines of up to $10,000, and be sentenced to up to 10 years in prison.

Hall, the boater in the Guilford crash, became the first person to be charged under the tougher law, in June 2010.  In court earlier this month, he accepted a plea agreement and apologized to the victims’ mothers.

Now 27, Hall is scheduled for sentencing in July, where he is expected to receive a 10-year prison sentence, suspended after 3 1/2 years. He is facing separate lawsuits from the families of all three passengers—Cook, who died, and survivors Devon Hardy and Elizabeth Protzman, who were both seriously injured. 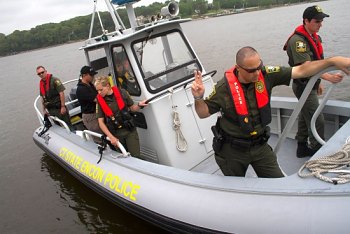 EnCon Police dock boat during a training exercise on the Connecticut River.

Michelle Lettieri, director of victim services for the state chapter of Mothers against Drunk Driving, has worked with survivors of several high-profile boating accidents, including Protzman and Brandes.

A lifelong boater, Lettieri thinks such cases, combined with public education, may be helping people realize that drinking and boating can have the same consequences as drinking and driving.

“A lot of time, people aren’t thinking,” she said. “They see boating as a sport. They’re on the water, having a good time.”

An official determination that alcohol is a factor in a boating fatality can come from either testing the victim or operator, or from an investigator’s observations and interviews, Mariani said. The law requires that a blood sample be taken from any victim of a fatal boating accident.

State officials say they have stepped up enforcement of BUI laws in recent years, are making more random stops, and are revoking more Safe Boating Certificates, which are required to operate a boat in Connecticut, from individuals convicted of BUI.

State and local officers reported 15 BUI arrests in each of the last two years—more than twice the number in 2008 and three times those in 2009, said Timothy Delgado of the DEEP’s boating division.

Staffing cuts have strained DEEP’s enforcement and investigative resources. While the number of boating accidents DEEP investigates each year climbed from 58 in 2006 to 84 in 2010, staffing of DEEP’s Environmental Conservation (EnCon) Police, responsible for a wide range of recreational policing, has dropped from 63 officers a decade ago to 50 last year, said Col. Kyle Overturf, division head. 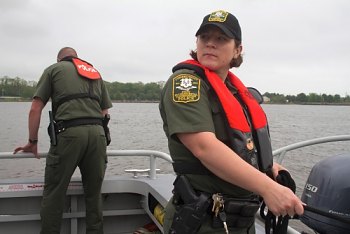 Overall in Connecticut, 84 percent of the accident victims who died from 1998 to 2010 were not wearing a life jacket, data shows.  When alcohol was a factor, none of the 34 victims was wearing a life preserver, reports show.

In September 2008, two men drowned when their canoe capsized on Monce Pond in Burlington. A witness who arrived with the pair told investigators that each had consumed four shots of vodka before boarding the canoe and had brought a bottle of vodka with them, according to a Coast Guard report. Neither was wearing a life jacket. One of the victim’s blood-alcohol levels was four times the legal limit, while the other’s was twice the limit, investigators found.

Federal and state boating officials recommend that boaters wear life jackets, but there are few laws mandating it. Connecticut law says life jackets must be worn by children under 13, in canoes and kayaks from Oct. 1 to May 31, and year-round on personal watercraft, such as Jet Skis.  Otherwise, the only requirement is that each vessel has a life jacket on board for each passenger.

While the state isn’t pushing for a stricter life jacket law, Mariani said, DEEP officials are using education programs and social marketing to encourage boaters to wear them.  The agency also has a designated vessel that the DEEP uses to visit boaters on the water and talk to them about the dangers of drinking and boating.

Since 2009, Connecticut has joined the Coast Guard in “Operation Dry Water,” a national campaign over the July 4th weekend to reduce alcohol and drug-related accidents and fatalities.

Sgt. Eric Lundin of the EnCon Police said officers have authority to stop and board any vessel if they see suspect behavior, such as going too fast in a no-wake area. Although carrying alcohol onboard or holding an alcoholic drink while operating a boat are not illegal in Connecticut, officials say such behavior can prompt a routine inspection.

Overturf said deciding whether to bring a boater to shore for alcohol testing is a judgment call, since standard sobriety tests cannot be conducted on-board vessels in Connecticut. Officers gauge whether operators have alcohol on their breath or are slurring their words, while they also survey the boat for empty bottles and cans. If the boater appears intoxicated, the officer may bring him or her to shore for testing, Overturf said.

Overturf said two officers are being the trained to administer recently developed “seated sobriety tests” on the water, which “would make the process of detecting boaters under the influence easier for officers.” The tests would still need approval by the state’s attorney’s office and would not likely be available to officers until the 2013 boating season, he said.