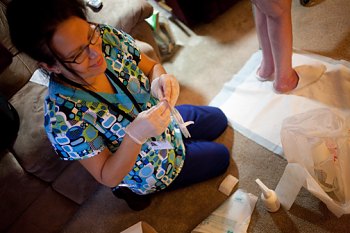 As the Malloy administration seeks to expand home health care options and reduce reliance on nursing homes, a new national report shows Connecticut ranking in the bottom-quarter of states on several key indicators of home health quality, including the percentage of home care patients who show improvement in mobility and who avoid hospitalizations.

Data compiled in the report by the Commonwealth Fund shows that the state’s three hospital referral regions—Hartford, New Haven and Bridgeport—ranked 255th out of 306 regions in 2010-11 in the percentage of home health care patients whose ability to walk or move around improved. The state also was in the lowest quartile nationally for the percentage of home health patients whose wounds healed or improved after an operation.

And Connecticut ranked in the bottom 25 of the 306 regions on the rate of keeping home health patients out of hospitals. The statewide rate of home care patients with a hospital admission was 33.5 percent—meaning one in three Connecticut home health clients landed in the hospital in 2010-11. The national median was significantly lower: 26.6 percent.

The indicators are recorded by the federal government in an attempt to measure the quality of home health care services provided by licensed agencies across the country.

“Interestingly, many areas in the Northeast—particularly in Connecticut, western Massachusetts and upstate New York—tend to have lower-than-average hospitalization rates among nursing home residents, but have the highest (or worst) rates of hospitalization among persons receiving home health care,” the March report by the Commonwealth Fund says.

Connecticut has a lower-than-average rate of long-stay nursing home residents being admitted to hospitals, according to federal data.

Home health advocates said they are aware that the state’s hospitalization rate is high, and that the mobility improvement rate is low. They said efforts are underway to address those issues, which they attributed to several factors:  Connecticut has an older population of home health clients, high rates of hospital readmissions after discharge, and one of the lowest statewide “length-of-stay” rates for hospice care, meaning sicker patients remain in regular home health care.

“People are going back and forth from hospitals to home health care, from home care to hospitals, before they’re getting into hospice care,” said Tracy Wodatch, vice president of clinical and regulatory services for the Connecticut Association for Home Care and Hospice (CAHCH). “With a chronic population, you will see high rates on some of these (quality) measures.”

Gov. Dannel Malloy’s proposed budget expands efforts to move people out of nursing homes and into home-based care, which is generally less expensive. Among the elements of the governor’s proposal are reducing the waiting list for one of the state’s home care waiver programs; retraining some nursing home staff for home care work; and allowing trained, non-licensed home health workers to administer medications to people at home.

State officials are working to expand the “Money Follows the Person” program, which provides federal money to states for moving patients from nursing homes into residences. Malloy’s plans call for moving 2,250 nursing home patients on Medicaid into residential settings by 2013 and a total of more than 5,000 patients by 2016. To date, about 900 people have participated in the program, said Anne Foley, under secretary for policy and planning for the Office of Policy and Management.

Deborah Hoyt, president of the CAHCH, said the state’s home health providers are “quickly getting up to speed” to handle the increased demand. “When it comes to improving quality measures, we’re ready,” she said.

But she also said some agencies are struggling to make ends meet, as state Medicaid reimbursements have remained flat in recent years, Medicare rates have been cut, and agencies face a workforce shortage. Three non-profit VNA agencies—in Stamford, Wallingford and Greater Bristol—closed within the last year.

“While the industry wants to be part of the solution and work collaboratively across the health care system, we need to make sure the state of Connecticut is not going to cut us so close to the bone that we’re not going to be able to be there,” Hoyt said.

Foley, of OPM, said the governor’s budget includes nearly $2 million targeted to improving the transition to home care — $250,000 for the development of a web-based tool to help people identify home care options;  $300,000 to create a standardized care assessment for people moving out of nursing homes; $400,000 for retraining of workers; and $1 million to help people moving out of nursing homes modify their residences.

Julia Evans Starr, executive director of the Connecticut Commission on Aging, said the high hospitalization rate is “an indicator we are definitely tracking. Bouncing back and forth to hospitals is not a good situation.”

She and other advocates said they hoped the lagging home-care measures would not detract from the state’s plans to “rebalance” long-term care—away from institutional settings and toward home-based care.  Starr said the rebalancing could entail the reduction of 7,000 to 9,000 nursing home beds. She said she hoped some of the savings from the shift to home care would be invested back into the home-health system.

“If we’re saving money, that’s wonderful—but let’s re-invest some of that money back into the home and community system. That’s essential,” she said.

Federal data shows that in Connecticut, the New Haven region fared worst in the percentage of home health care patients whose ability to move around or walk improved, with agencies reporting that 49.7 percent of clients showed improvement. The median nationally was 53.4 percent. The state’s average was in the bottom 15 percent of all 306 regions—worse than areas including Boston, Philadelphia and Newark.

All three Connecticut regions also logged higher-than-average numbers in 2010-11 for home health patients being admitted to hospitals. New Haven’s rate was 34.1 percent; Bridgeport’s was 32.5 percent; and Hartford’s was 31.8 percent. Nationally, fewer than 27 percent of home health clients have a hospital admission, the data shows.

Although some hospital admissions are planned or necessary, many stem from preventable events, such as falls or acute exacerbations of chronic conditions. Experts say home health agencies can reduce such adverse outcomes—and costs of care—through proactive needs’ assessments and coordination with patients’ physicians.

Medicare-certified home health agencies, like nursing homes, are licensed and inspected by the state Department of Public Health. But penalties for shoddy care—in the form of consent orders or Medicare terminations—are rare in Connecticut.

Connecticut Community Care, Inc. of Bristol, has run a pilot “care transition intervention” program at the Hospital of Central Connecticut that has reduced hospital readmissions by training patients and their caregivers to better manage health problems at home. That program is now slated to be expanded to nine hospitals.

Statewide data from 2008 shows Connecticut ranked 45th of 50 states in avoiding hospitalizations; data from 2007 shows Connecticut ranked 38th in mobility improvements. Those numbers stand in stark contrast to the state’s high rates on other health-quality indicators, including the percentage of adults 50 and older receiving recommended screening and preventive care, and the percent of children 17 and under who have insurance.

Overall, on all 43 indicators measured in the new Commonwealth Fund report, the three Connecticut regions ranked in the top quarter of the 306 regions, with Hartford ranked 18th highest, Bridgeport at 31, and New Haven ranked 44th.

Julie Robison, associate professor at the Center on Aging at the University of Connecticut Health Center, said she could not speculate on why the state fared poorly in some key home health measures. But she said results of a survey of participants in the Money Follows the Person program show “a very much improved quality of life” for people who move from nursing homes into home settings.

She said her main concern was about “barriers” to home care that steer people who don’t need institutional care into nursing homes. Only one in three people who enter a nursing home returns to the community within six months, she said.

An analysis of federal data shows a wide swing in the rates of individual home health care agencies on the mobility and hospitalization measures.

While some agencies reported that fewer than 25 percent of their clients had to be admitted to hospitals, others reported rates of more than 50 percent. Agencies with the highest hospitalization rates included Continuum Home Health, Inc., of New Haven, at 74 percent; Quality Visiting Nurses, LLC, of Watertown, at 60 percent; and Advanced Home Health Care Agency of West Hartford, at 54 percent.

Agencies with the best reported rates of avoiding hospitalizations included: Roy & Aline Friedman Home Care, of Fairfield, at 18 percent for hospitalizations; and BAYADA Home Health Care, of Norwalk, at 21 percent.

Some agency representatives said their high hospitalization rates were driven by the at-risk populations they serve. Continuum has a large caseload of patients with psychiatric needs, while Advanced Home Health takes on patients with complex medical needs.

“We are a small agency,” said Fedor Gitman, director of Advanced Home Health. “Just to survive, we have to be flexible and take on difficult cases.”

Similarly, while three-dozen agencies exceeded the national median of 53.4 percent of patients whose ability to move or walk improved, eight fell below 40 percent. They included Avery Heights Home Health of Hartford, at 22 percent, and Health at Home of Branford, at 25 percent. Some agencies with low rates of mobility serve geriatric patients with advanced, chronic disabilities, their representatives said.