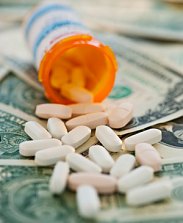 Similarly, Dr. Murray Wellner of West Hartford was the beneficiary of speaking fees and meals from four drug companies last year, even as federal prosecutors were investigating allegations that he wrote out 11 illegal prescriptions for controlled substances—charges he settled in April by paying a $42,500 fine.

Sternstein and Wellner are among the most striking examples of doctors in Connecticut who have reaped benefits from pharmaceutical companies while also being disciplined for violating medical conduct rules, according to records of the state Department of Public Health and public disclosures by drug companies from 2009 to 2011. That dual status—drug company beneficiary and over-prescriber—is not uncommon, experts say.

“Doctors receiving payments while also being disciplined for overprescribing is obviously of concern,” said Dr. Joseph Ross, an assistant professor of medicine at Yale School of Medicine, who has written about the industry’s influence on physicians.

He said that while it is difficult to know how ties between the industry and prescribing providers affect clinical decision-making, drug company payments—in the form of meals, speaking or consulting fees—are intended as marketing “incentives” to get doctors to use their products.

A check of physician records shows about a dozen Connecticut doctors receiving drug company benefits either shortly before or after being sanctioned by the state for various offenses. Whether a physician’s disciplinary record should matter to the pharmaceutical industry is a subject of debate: Some drug companies say they are trying to screen out physicians with disciplinary records, while some doctors say their past misdeeds have no bearing on their affiliations with drug companies.

Besides Wellner and Sternstein, at least two other Connecticut physicians who received speaking fees from pharmaceutical companies in the last three years had been cited for prescription-related misconduct.

Dr. Jacob Zamstein of Bloomfield was reprimanded and fined by the state medical board in 2004 after he was convicted of health care fraud and sentenced to one year probation. He was among four urologists charged with accepting free samples of the prostate cancer drug Lupron and then billing patients and Medicare when prescribing the drug. He reportedly received between $30,000 and $40,000 from billings for the free doses.  He was paid $1,550 in speaking fees by GlaxoSmithKline in 2010.

Zamstein said last week that he had been a speaker for pharmaceutical companies for several years, and that some of his talks dealt with prostate medications. He said his disciplinary record should have “no bearing on my ability to share professional knowledge” with other health care providers.

In an earlier case, Dr. Robert A. Fox of East Haddam, a psychiatrist, was placed on probation for five years in 1993 for self-prescribing and misusing morphine and other narcotics, and for treating two patients with excessive quantities of Percocet or other controlled substances. Medical board records say he suffered from major depression, panic disorder and chemical dependency. He surrendered his license in New York state because of the Connecticut charges.

Eli Lilly’s payment registry shows Fox received $20,550 from the company in 2009 in speaking fees for “healthcare professional educational programs,” and another $11,979 in 2010 in speaking fees and travel expenses. He could not be reached for comment.

Drug companies for years have paid doctors to promote brand-name drugs to their peers, or have invited physicians to dinners or lunches as a way to talk-up their products. A dozen companies now publicly disclose at least some of those payments, dating back to 2009. Many do so as a result of legal settlements with the government.

In 2010, an investigation by ProPublica uncovered hundreds of doctors nationwide on company payrolls who had been accused of professional misconduct or who lacked credentials as specialists. Since then, some companies, including Eli Lilly, have taken steps to screen out physicians with disciplinary records from receiving speaking and consulting fees.

The review of cases in Connecticut focuses on physicians who have been sanctioned by the state Medical Examining Board, and who received drug company payments from 2009 to 2011. Some received speaking fees; other received meals.

Records show Sternstein, the Berlin psychiatrist, received $17,857 in payments from Pfizer, AstraZeneca, Cephalon and Eli Lilly from 2009 to 2011. The biggest payment was $14,000 in speaking fees from AstraZeneca in 2010, followed by $3,450 from Eli Lilly in 2009. The drug company records, compiled in a ProPublica database, show Eli Lilly continued to pay him in 2011, although the amount was relatively small: $15 for business meals.

After an investigation, the Connecticut medical board suspended Sternstein’s license in August 2010 on charges he had recklessly overmedicated 10 drug-addicted patients in 2009. The board permanently revoked his license a year later. Board records allege that throughout 2009, Sternstein prescribed opiates, benzodiazepines and other addictive substances to patients without properly monitoring their treatment, and that in some cases he prescribed dangerous combinations of drugs or excessive doses. Two patients died of overdoses while under his care.

State records show Sternstein, a pain management specialist, was a top prescriber of a number of controlled substances in 2009, including Actiq, an opiod pain medication, and Xanax, a benzodiazepine used to treat anxiety. Actiq is manufactured by Cephalon; Xanax is a product of Pfizer. Both companies paid him for meals and other items in 2010.

Sternstein, who no longer practices in Connecticut, could not be reached for comment.

Wellner, of West Hartford, was reprimanded, fined $10,000 and placed on two years’ probation in April 2011 after he admitted to writing prescriptions in 2010 for Vyvanse, a stimulant used to treat attention deficit disorder, for patients who did not require the medication and then re-directing the drugs. He entered into a settlement with prosecutors in which he paid $42,500 to resolve allegations that he violated the Controlled Substances Act by writing improper prescriptions for both Vyvanse and Subutex and failing to account for all of the controlled substances that he purchased and dispensed.

Wellner said last week that he used to be an “expert speaker on certain products,” but that he was doing less speaking in the last few years. He said the sanctions against him for improper prescribing bore no relation to his drug-company activities.

“There’s no connection between what I did and the speaking,” he said. “I did something inappropriate… I made a mistake without knowing what I did. Obviously if I commit murder or something, I should not be doing speaking (to other physicians). I would agree on that.”

Some drug companies have taken steps to screen physicians hired as speakers and consultants, in the wake of ProPublica’s report. Kristen Neese, a spokeswoman for Pfizer, said that in addition to ensuring that health care providers are “in good standing” with federal agencies, the company is “exploring new ways to better utilize the varied and often inconsistent information gathered by state medical boards,” including making quarterly checks of state disciplinary actions.

Kevin Colgan, a spokesman for GlaxoSmithKline, said the firm strengthened its screening guidelines last year for speakers and consultants, and now excludes practitioners who have received state or federal sanctions. He said both Wellner and Zamstein had been retained as speakers before the new policy went into effect, and would no longer serve as speakers.

J. Scott MacGregor, a spokesman for Eli Lilly, said the company began state-level screening of speakers and consultants last year. He said the screening does not extend to business meals, which allow Lilly representatives to discuss their products with healthcare providers.

Ross, the Yale expert, said meals are another way for drug companies to forge alliances with doctors. “It’s an opportunity to have face time with a physician. It’s pure marketing,” he said.

While disclosures of physician payments now vary in scope from company to company, provisions in the federal health care reform act require that all industry payments to physicians—of $10 or more—be publicly disclosed by September 2013.

In Connecticut, hundreds of health care practitioners have received millions of dollars in pay for consulting, travel, meals and speaking since 2009. Company records show several dozen physicians collecting more than $50,000.

The review of available records shows at least seven other Connecticut doctors who were disciplined for lapses in patient care receiving industry payments from 2009-2011:

• Dr. Nathan Valin of Hamden was reprimanded and fined $5,000 by the state medical board in 2004 for failing to provide proper post-operative care to a patient who underwent a coronary artery angioplasty. The patient suffered cardiac arrest and died. Valin received $2,600 in speaking fees from Eli Lilly in 2009 and another $6,034 in 2010.

Valin said last week that the disciplinary action should have no bearing on his industry-sponsored speaking, which he said focused, in part, on the anti-platelet medication Effient. The drug is manufactured by Lilly and used for patients treated with angioplasty.

“I don’t understand why you are bringing up a reprimand that happened [eight] years ago,” Valin said. “That has nothing to do with my being a speaker.”

In terms of his drug company payments, he said, “I’m on probably the lower end of the scale of physicians in Connecticut. It’s not like I’m getting hundreds of thousands of dollars.”

• Dr. Philip Mongelluzzo, Jr. of Waterbury was fined $1,000 by the state in 2005 for inappropriately caring for a patient by referring him for an MRI, despite knowing he had a pacemaker—a potential danger. He received $78,048 from three drug companies from 2009 through 2011, including $59,250 in speaking fees from Cephalon in 2009. The company’s website says physicians are paid to conduct “company-sponsored peer-to-peer educational speaker programs.”

Mongelluzzo could not be reached for comment, but his father, Philip Sr., said his son had done speaking and “drug-rep education programs” in the past. He said the disciplinary infraction was “total nonsense” and not relevant.

• Dr. George Michael Donahue of Enfield was put on two years’ probation in 1998 for prescribing excessive quantities of the narcotic pain-reliever Percocet to a patient. He received $1,969 in meals from Pfizer from 2009 through 2011, records show.

• Dr. Robert Stark of Greenwich received a reprimand and a $7,500 fine in 2004 for incorrectly interpreting a patient’s electrocardiogram by failing to notice an aortic dissection. The 33-year-old patient, who was discharged from Greenwich Hospital, died five days later. State board records note that Stark took steps to prevent such an event from recurring. He received $250 in speaking fees from AstraZeneca in 2010.

• Waterbury psychiatrist Dr. Arvind Shah was sanctioned by the medical board in May 2009 for violating professional boundaries by hiring a patient as a therapist in his office. In 2010 and 2011, he received meals valued at more than $900 from Pfizer and Eli Lilly.

• Two Norwalk doctors were punished by the state. Dr. Bharat Patel, who was reprimanded once in 2004 for failing to order proper tests on a woman with cardiac problems, and again in 2010 for allowing an unlicensed employee to practice medicine, received more than $600 in meals from Pfizer in 2010 and 2011. Dr. Gerald Weiss, who was reprimanded and fined in April 2010 for allowing an unlicensed employee to practice nursing, received meals valued at $320 from Cephalon in 2010 and 2011.