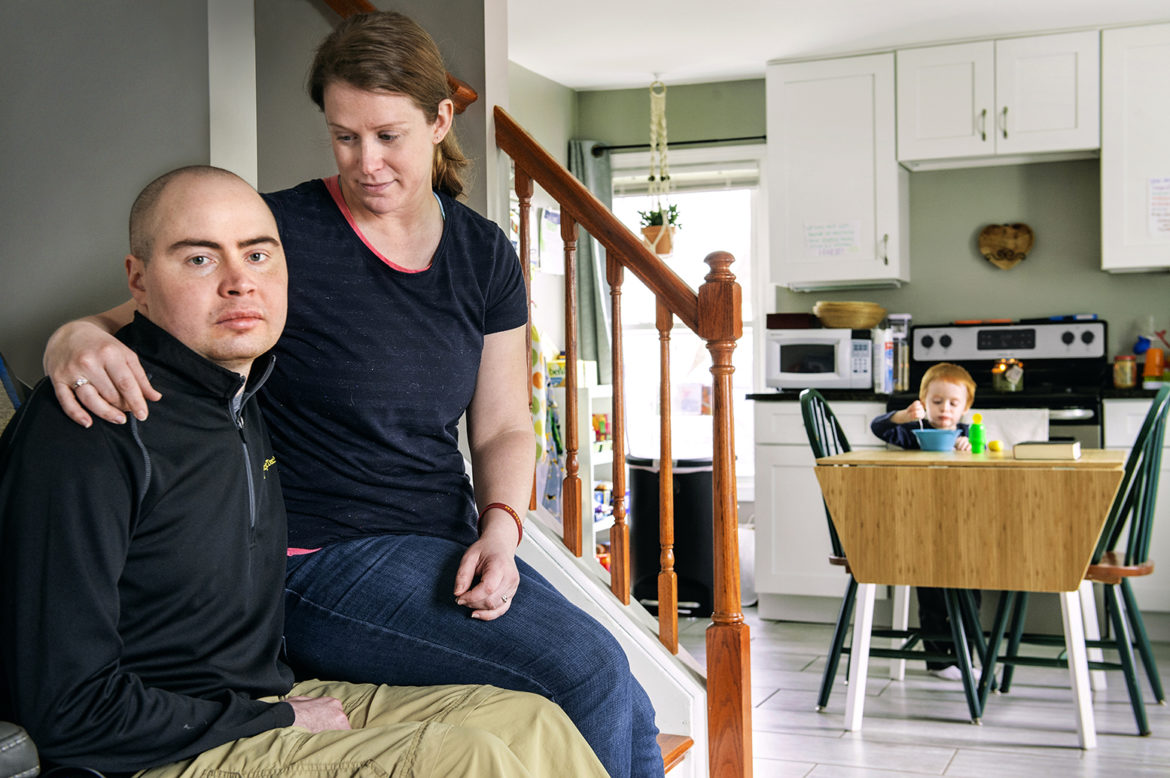 Army Veteran Peter Antioho with his wife, Amy and son, Mark in their Berlin home. Antioho was exposed to black smoke from an open burn pit in Afghanistan. He's fighting for federal disability benefits.

Every day for 10 months in 2012, Peter Antioho walked through dense, black smoke from an open burn pit on his Army base in Afghanistan. Human and medical waste, plastic water bottles, ammunition and chemicals were among the materials burned with diesel fuel 24 hours a day.

Five years later, Antioho was diagnosed with an aggressive, terminal brain cancer called glioblastoma multiforme. The West Point graduate and Berlin resident was 31 when he was diagnosed, young for this cancer. He was second in command at his base, but now, with symptoms that include memory loss and impaired vision, speech and motor function, he can’t work.

He has submitted medical records and statements by doctors, his commander and others to prove a link between his cancer and the burn pits, but has been rejected for related federal disability benefits twice.

The burn pit “was always smoldering and there was no way to go around it,” Antioho said in a statement to the U.S. Department of Veterans Affairs (VA).

He is in the process of requesting another review with the help of the Connecticut Veterans Legal Center.

Across the country, veterans are contending exposure to burn pits and other airborne toxins has made them sick. But of the 12,378 burn pit disability claims filed between June 2007 and last March 31, only 20 percent (2,425) were granted VA disability benefits.

After 9/11, open pits were the predominant method of waste disposal on Iraq and Afghanistan military bases. A wide range of items, including paint, petroleum, rubber and food waste, were burned. In 2010, Congress banned the pits except where there aren’t feasible alternatives.

A major concern is that burn pit exposure will be like Agent Orange exposure, which resulted in Vietnam War veterans fighting for decades for benefits for related illnesses, said Stephen Kennedy, Connecticut team leader of Iraq and Afghanistan Veterans of America (IAVA). The hope is to avoid “turning it into this whole nightmare Vietnam veterans are going through,” said Kennedy, of Fairfield.

Veterans are pinning their hopes on Congressional action. The proposed Burn Pits Accountability Act would require the Department of Defense (DOD) to track burn pit exposure of service members, include it in all medical and military records, and share it with the VA. All exposed veterans would be enrolled in the VA’s Airborne Hazards and Open Burn Pit Registry, now a voluntary questionnaire. Another bill would permit designees to add cause of death to registry data on deceased veterans. Both registry proposals aim to determine the extent of exposures, illnesses and clusters.

According to the VA, 3.5 million veterans who served in Iraq, Afghanistan and elsewhere in the Middle East are eligible to record their exposure in the burn pit registry, a tool to help identify health conditions possibly related to burn pits. As of April 1, there are 173,195 veterans enrolled. State breakdowns updated to Dec. 31, 2018, show 832 from Connecticut. Advocates contend   many veterans aren’t aware of the registry.

Kennedy, an Army veteran who served in Iraq in 2007 and 2008, said most military there “had at least some interaction” with the pits. “Some people camped out right next to them for their whole deployment,” he said.

The smell was “pretty nasty,” Kennedy said, calling it “the kind of smell where you know this is wrong, this can’t be good for you.

Kennedy said he hasn’t gotten ill, but has enrolled in the burn pit registry to establish his exposure in the event of a future illness. Such enrollment does not affect the disposition of a claim, according to the VA. Veterans note that some illnesses linked to the herbicide and defoliant chemical, Agent Orange didn’t manifest for decades.

The IAVA is calling for more information, research and new laws. “The simple fact of the matter is we don’t have a total accounting of where they were or where they operate right now,” said Melissa Bryant, IAVA chief policy officer.  Bryant said since she left the Army, she has had sinus infections and infertility problems and suspects a connection to burn pits in Iraq.

According to the U.S. Central Command of the DOD, there is one burn pit in Syria which disposes of hazardous waste and 13 others throughout the Middle East that burn non-hazardous materials and/or classified documents.  No specific locations were provided.

“Unfortunately, until the VA puts substantial resources into studying the effects, and comes out with a list of presumptive, or at least potentially connected, conditions” she said, “it is really hard even for veterans or advocates to pinpoint a connection, let alone convince the VA.”

Spokespersons said the DOD and the VA are researching health links to burn pit exposure and cited an upcoming study by the National Academies of Sciences, Engineering and Medicine, which is to conclude next year.

“The health and well-being of our service members is a DOD priority,” said Heather Babb, a spokesperson. “We are concerned that toxins from burn pit emissions may pose health risks and we are assessing potential long-term impacts,” she said. Tatjana Christian, a VA spokesperson, said the VA uses “the latest scientific and medical evidence available” to adjudicate burn pit claims, which are considered “on an individual, case-by-case basis.” She said veterans have been granted benefits for such illnesses as migraine, chronic bronchitis, sinusitis, irritable bowel syndrome and chronic obstructive pulmonary disease.

Bryant, of the IAVA, said that since the VA doesn’t automatically presume a connection between illnesses and burn pit exposure, a veteran must “make an ironclad case.” She said the onus “should be on the government to say ‘we know you were in this place and were exposed.’”

Antioho submitted “at least 12 pieces of new evidence” when he filed his second claim, but was rejected again, said his wife, Amy Antioho.

He spends his days getting physical and occupational therapy at Gaylord Specialty Healthcare in Wallingford; social work and other health care at the Newington VA; and cancer care at Smilow Cancer Hospital in New Haven. He and his wife, his full-time caregiver, have a 3-year-old son.

Amy Antioho said VA staff has told the couple, “we will do everything in our power to help you with your claim.” But, she said, “my husband has a terminal illness. We might not have that time.”

For information on the burn pit registry click here.