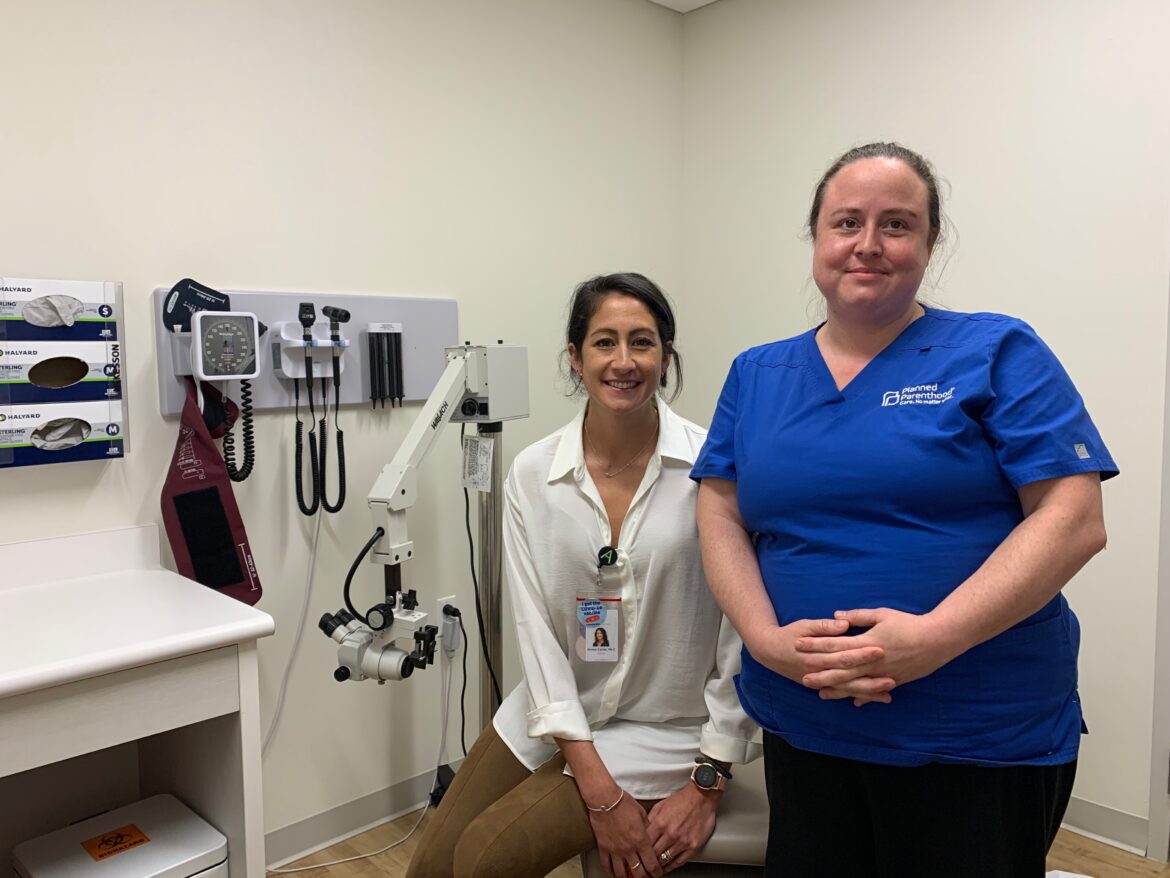 Amina Carter, a physician assistant, and Jennifer Love, a certified midwife, are preparing to help an influx of out-of-state patients seeking abortion care.

Certified nurse-midwife Jennifer Love remembers a scene from a training rotation she did many years ago in Cartagena, Colombia, where abortion was illegal at the time.

If women came in with complications after a miscarriage or a self-induced abortion, they had to wear a marked shirt and sit in a special area of the obstetric emergency department, where Love worked.

“The trauma and the stigma,” she said, “I never thought that we would be moving to where our patients would experience that same sense of fear and shame. It’s terrible. It just breaks my heart.

Love, who now works at Planned Parenthood of Southern New England (PPSNE), says for her, the potential end of the federal right to abortion care is a scary prospect. It may come within weeks if the U.S. Supreme Court issues a version of the majority opinion in the Mississippi abortion case Dobbs v. Jackson that was leaked in May.

The 1973 Roe v. Wade court decision affirmed the right to receive an abortion under the 14th Amendment, ruling that abortions are constitutionally protected until about 23 weeks, when a fetus could live outside the womb. Last year, the Supreme Court agreed to hear a challenge to Mississippi’s 15-week abortion ban in Dobbs v. Jackson, setting the court up to examine decades of precedent set by Roe.

“It’s really disheartening to be living through this, but I feel really proud to be on the front lines of doing this work,” Love said. “And I’ve never in my life been prouder to work at Planned Parenthood or be an abortion provider.”

Love and her fellow clinicians at Planned Parenthood’s 14 clinics in Connecticut are also preparing for the moment.

“If Roe falls and then all of these trigger bans go into effect, I think it’s going to be pretty swift that patients are going to be left without access in their home state,” said physician assistant Amina Carter, referring to the states where legislators have passed so-called “trigger laws” restricting abortion almost immediately if Roe is overturned. “And so, it’s going to be up to places like Connecticut and other safe harbor states to open our doors and open access to folks who are seeking care.”

“An abortion ban is going to disproportionately affect women of color. I think we’re going to see a big impact, a negative impact on Black maternal health. We’re going to see maternal mortality skyrocket, I think, as these bans go into place.”

The clinics have already seen people traveling from Texas since that state banned abortion after six weeks of pregnancy. Zari Watkins, PPSNE’s chief operating officer, says that so far, the number is low, probably fewer than 10. But she said the organization’s affiliate in Oklahoma had been experiencing a 2,500% increase in visitors since the Texas restriction was enacted. Now, Oklahoma’s recent ban will result in those patients seeking care elsewhere.

“We’re currently working to make sure we can provide seamless abortion navigation for patients coming from out of state,” said Watkins. “It wasn’t something that happened often before, so we never really had to make sure that we had a formal structure and workflow in place.”

That could mean connecting a patient with financial resources from an abortion fund, arranging travel and lodging, or ensuring they can get a timely appointment.

The clinics are preparing by improving their online scheduling platform. They’re also seeing what they could do for women for whom travel is not an option. Zari Watkins, PPSNE’s chief operating officer, said that she wants to make sure patients know their “doors are open.”

“We have been working with our lobbyists and attorneys to understand what the next steps are to put medication abortion in place via telehealth,” Watkins said.

Telehealth As A Tool

Telehealth is also an outreach method considered by the Hartford GYN Center, Connecticut’s only independent abortion clinic. Hartford GYN is part of The Women’s Centers, a multistate network that includes clinics in New Jersey, Pennsylvania and Georgia, among other states.

“We’re just thinking of creative ways to see as many people as we can to meet the demand,” said Dr. Lisa Perriera, chief medical director of The Women’s Centers.  That may include getting physicians in states like Connecticut licensed to practice in states with abortion bans so that they can provide a telehealth visit and medication for abortion by mail.

“It’s still up in the air,” she said. “Telehealth law varies state by state. Most of the time, if you were doing a telehealth visit, the doctor or the clinician has to be licensed in the state that the patient is sitting in during the telehealth visit.”

Because of its network, The Women’s Centers already has a good deal of experience with women traveling across state lines for care.

“We have a centralized appointment center,” Perriera explained. “The patients call in, and we figure out what center is closest to them, what their resources are. Some of the locations have patient support networks where folks will help them sleep on couches or drive them to the clinic.”

She expects the network of support for travel to be tested in the coming months as the ripple effect of abortion bans widens to states like Connecticut.

“New York is a centralized location where people can fly in and out,” she said. “People from Texas may fly to New York to get their abortions. People that live in New York won’t have as much access to abortion, so they might go to Connecticut, which is close.”

The remaining 33% would have seen a physician for an in-clinic procedure, which can cause delays in care. People gathered in cities and town across Connecticut and nationally in support of Roe v. Wade last month. The crowd in New London rallied at Parade Plaza and marched to the courthouse.

Planned Parenthood’s Carter said physicians are “really stretched thin,” which sometimes leads to patients having to travel to another clinic or wait a week before they can have the procedure.

“So, it’s just an additional delay, additional transportation for our patients,” she said. “Another day that they have to take off and find childcare. It puts a lot of burden on that patient.”

The shortage of clinicians available for in-clinic procedures in Connecticut should ease just as demand from other states is expected to rise. Connecticut’s new law aimed at widening abortion access goes into effect on July 1. Love and Carter are among the clinicians who will undergo training to provide aspiration abortions at the clinics where they provide health care. Under the legislation, advanced practice registered nurses (APRNs), nurse-midwives and physician assistants will be eligible for the training. PPSNE says of its current staff, 60 people could potentially complete the training.

“We’re already safely providing plenty of other procedures, like IUD inserts, colposcopies,” said APRN Colleen Taylor, “and a first-trimester aspiration abortion is another part of health care that we can safely provide and should be safely providing.”

The new law will also protect patients who travel to Connecticut for abortions and shield Connecticut providers from being prosecuted in states from which patients have traveled.

The potential end of federal protections under Roe has sparked many emotions for the people who work most closely in this field.

“Honestly, for me, it’s raised anger that everybody else that’s not in this work is so surprised,” Perriera said. “I knew in my heart of hearts, even though I didn’t want to believe that it was true, that the Supreme Court was going to go this way. We’ve been planning for this, and the fact that everybody else is so outraged is sort of infuriating.”

“I feel a sense of urgency,” Watkins said. “I want to make sure that patients understand that our doors are open, we are here for them, and we will continue to work to find ways to meet the patients where they are.”