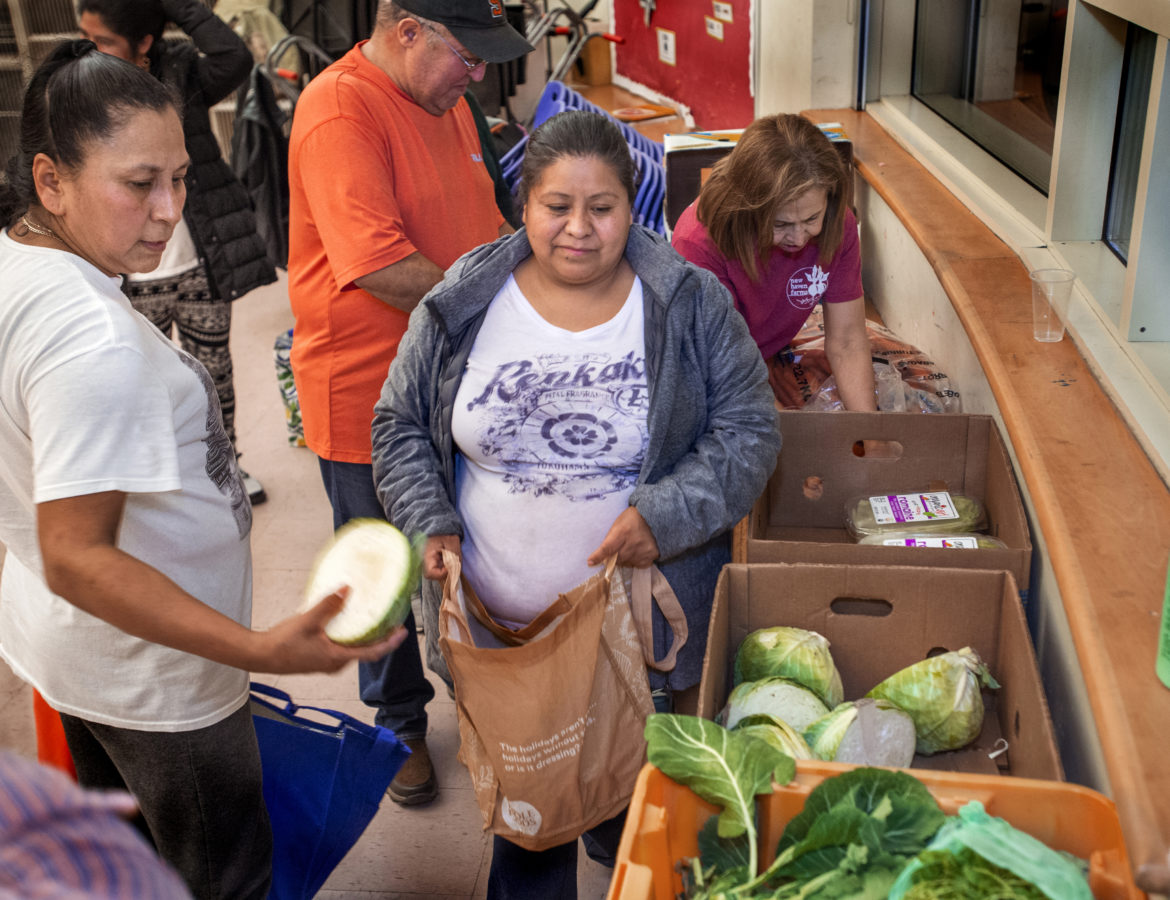 Georgina Castelon (left) and Juana Rodriguez pick up produce, including cabbage, carrots and kale after an exercise class at John S. Martinez School in New Haven. In back are Juan Ortiz and Ruth Torrez.

About 13% of Connecticut residents said they did not have enough money to pay for food at least once in the previous year, according to the most recent Community Wellbeing Survey conducted by DataHaven in 2018.

Black and Hispanic residents were more likely to struggle, with 23% and 28%, respectively, reporting food insecurity. In several cities, about a quarter of all residents struggle to pay for food.

Urban residents are also less likely to have access to fresh fruits and vegetables, according to the survey. Statewide, about 72% said they had excellent or good access to produce, while the rates were only 56% in New Haven and 51% in Hartford and Bridgeport. 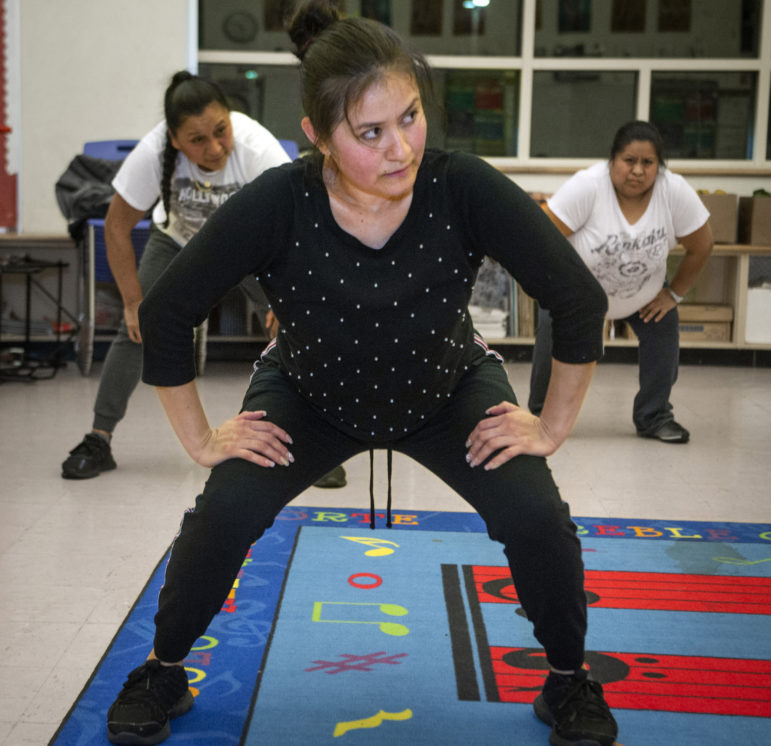 Eunice Castelan Castelan keeps her eye on the instructor a during an exercise and nutrition class at the Martinez school in New Haven. In the back are Georgina Castelan and Juana Rodriguez.

The group is one of several around the state seeking to connect lower-income residents with produce from urban farms. The group’s Farm-Based Wellness Program uses a diabetes prevention curriculum from the Centers for Disease Control and Prevention (CDC). Participants learn to prepare healthy meals with fruits and vegetables during an intensive 20-week summer program that continues monthly through the winter.

About 96% of families reported improvements in their eating habits, with an average weight loss of 4.29 pounds, and an average increase in exercise of 64 minutes per week, according to the 2019 evaluation report.

“For those that it works for, it really works,” Maisonpierre said. “We’ve had a lot of folks who have had a really significant turnaround in their health.”

Bill Flynn is one. When he joined the Farm-Based Wellness Program in July 2018, he weighed 360 pounds.

“I knew [my weight] was an issue for 10 years,” Flynn said. “It got to a point where I was a size 50 pants. I couldn’t put on my shoes, and I had congestive heart failure.”

By January 2020, he was down to 240 pounds. Now Flynn volunteers to help others in the program, even cooking meals for the winter meetings.

“I can’t say enough about how much this program has done for me,” Flynn said.

Ruth Torres joined the Farm-Based Wellness Program in 2012 when her 18-year-old grandson was diagnosed with pre-diabetes.

Torres stayed involved because she saw her health problems, including arthritis, improve through the program. She later became a Community Health Ambassador and is now the program coordinator. She regularly grows her own fruits and vegetables—something she never imagined doing.

“The program has taught me that food can be used as a medicine,” Torres said. 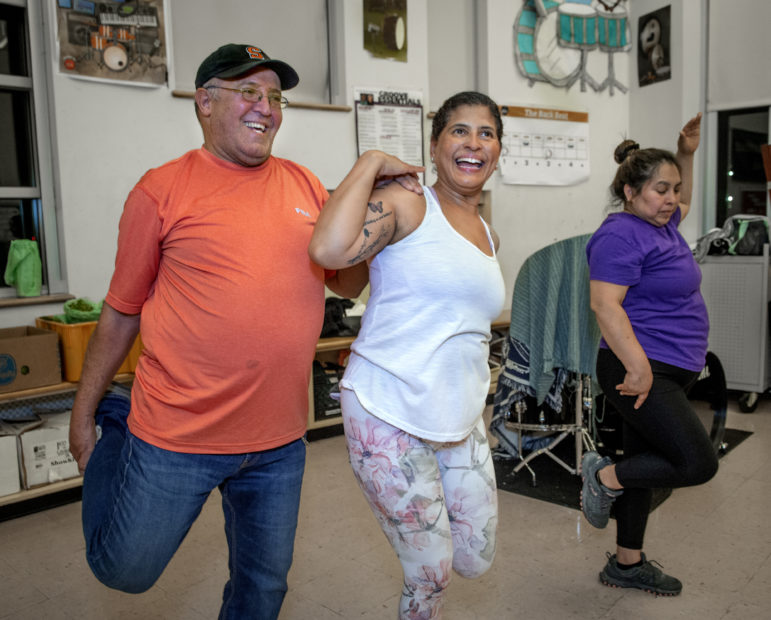 Juan Ortiz (L) gets some help from exercise instructor, Amanda Mia (C) during an exercise and nutrition class at Martinez school. At right is Soyla Aguilar.

“We are providing access to 150 families in Bridgeport who can now grow their food for their dinner tables,” Sandolo said. “We hear that the bulk of their vegetables during the growing season come from their plots.”

In Hartford, a mobile farmers market brings fresh produce into food desert neighborhoods. In Stamford, cooking classes help cancer patients use nutritious food as part of their healing plan. At Naugatuck Valley food pantries, a nutritionist is available to help provide recipes for the fruits and vegetables it distributes. In some cities, FoodCorps members are embedded in public elementary schools.

“That’s a lot of money on the table that could be used to feed people and generate income to the farmers,” Smith said.

Some are unaware of the program, but others can’t find transportation to get back for the second distribution, Smith said. It’s just one example of the layers that contribute to food insecurity.

“We believe that urban agriculture is one part of a much larger puzzle,” Sandolo said. “The food system is complex, poverty is complex, and the systems that prohibit folks from living the lives they would like to live are complex.” 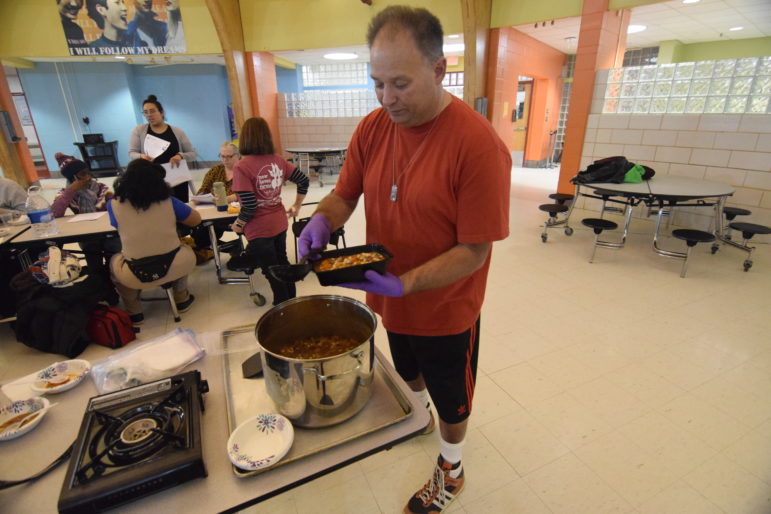 Bill Flynn joined the Farm-Based Wellness Program in 2018 and now volunteers to help others and even cooking meals to serve during wellness events.

Martha Page, the executive director of Hartford Food System, says helping people become self-sufficient is a first step. She noted that a decrease in food insecurity in Hartford, from 33% in 2015 to 23% in 2018 according to the Community Wellbeing Survey, followed decreased unemployment in the city over the same period.

“At the end of the day, the best thing that can be done for most people from a health perspective as it relates to food, is they have to be able to afford the food that will make them healthy,” Page said.

She has hope despite data showing continued lack of access in cities.

“You have a right to access healthy food in your neighborhood or within easy reach,” Page said. “More people are thinking about it, and more people are arriving at the notion of food justice and food democracy. That was not a concept that we even talked about when I started this job. More people know what it means when your community is a food desert. I think that’s progress.”