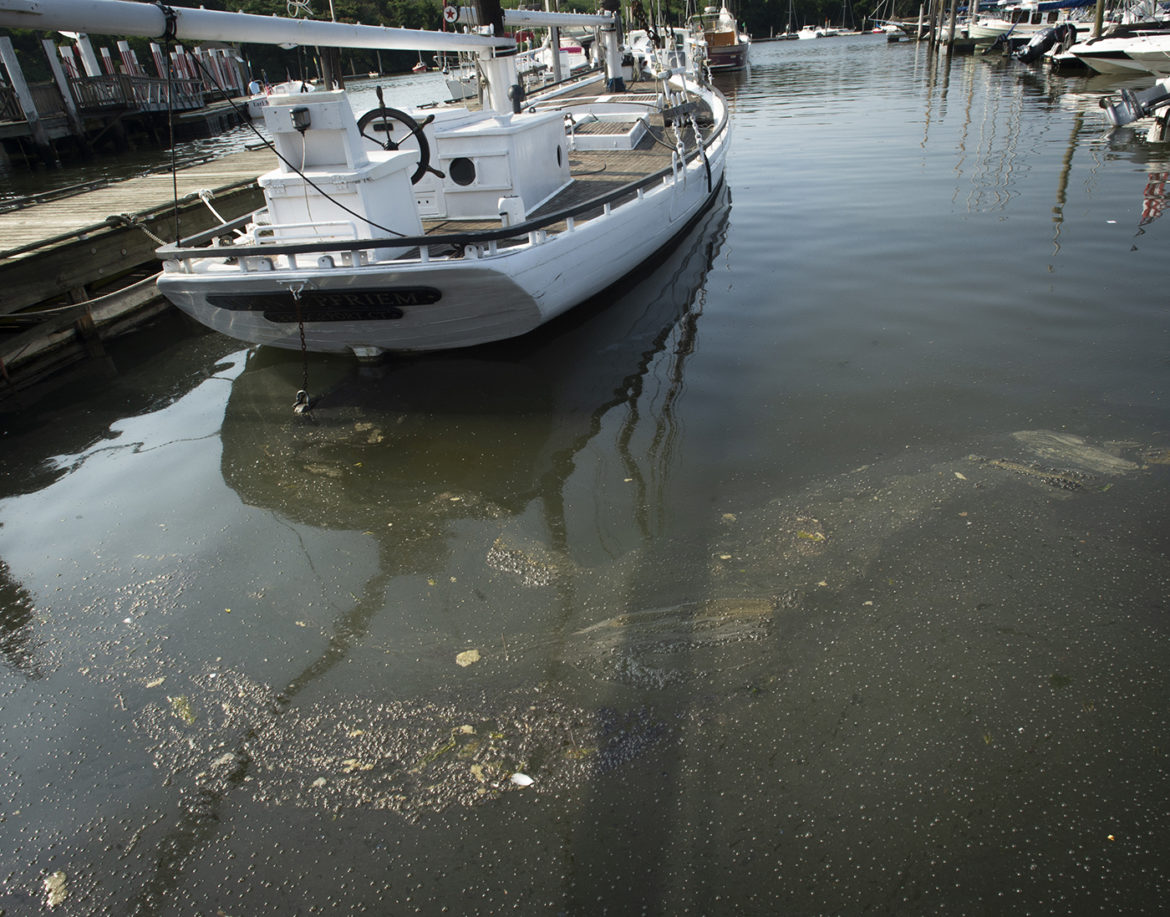 Hours after a heavy overnight rainstorm on July 12, a brown, foamy slick was floating in Black Rock Harbor near Captain's Cove Seaport. The West Side plant reported a legal bypass of more than 1 million gallons of disinfected partially treated raw sewage.

On April 25, 2018, Patrick Clough walked onto a dock at Fayerweather Yacht Club on Black Rock Harbor in western Bridgeport. He looked down. Swirling around the dock was a brown, foamy slick. Women’s sanitary products and other objects floated in it.

He posted a photo of the discharge on two Black Rock neighborhood Facebook pages, writing “This is disgusting.”

A week before Clough captured that photo, equipment malfunctioned at the Bridgeport West Side Water Pollution Control Facility. Fecal matter and other suspended solids spewed at two times the maximum limit allowed under a discharge permit issued through the National Pollutant Discharge Elimination System (NPDES). The state Department of Energy and Environmental Protection (DEEP) ordered the city to make all repairs and upgrades by 2039.

The West Side facility, the larger of two sewage treatment plants in the city, sends its treated waste through a 72-inch discharge pipe into Black Rock Harbor.

When the flow of waste and rainwater overwhelms the system, as it does several times a year, untreated sewage releases out of combined sewer overflow (CSO) pipes into the harbor.  It sluggishly works its way to the open water of Long Island Sound. The plant also discharges partially treated waste during storms or equipment failures. Those discharges are called bypasses. Like the CSOs, the bypasses are legal and will remain so for decades.

Every 10 days, on average, a sewage discharge flows into the harbor, according to July 2014-July 2019 data from DEEP. There were 99 CSOs and the West Side plant bypassed partially treated waste 85 times. Overflows from the CSO pipes range between 100,000 gallons and 500,000 gallons. The legal plant bypasses ranged from 1 million to 16 million gallons.

Most of the overflows rush out during rainstorms, but residents interviewed said that they have seen regular overflow discharges for years on dry days and that they suspect West Side facility equipment malfunctions are the cause. 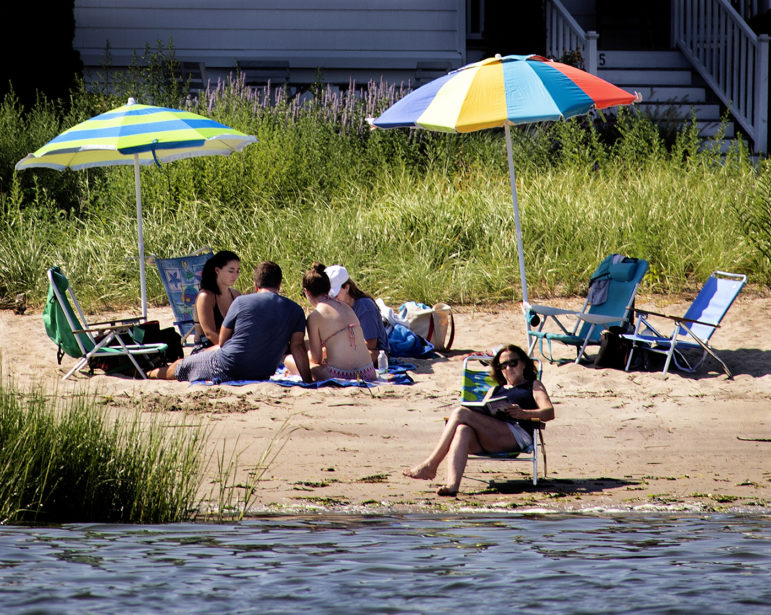 Sunbathers along Seabright Beach. The beach was closed to swimmers most of the summer.

The city’s sewage plant manager maintains that 99 CSO spills over five years is not a high number. “During a heavy rainstorm, depending on the intensity and duration, [the CSO pipes] can overflow,” said Lauren McBennett Mappa, general manager of the Bridgeport Water Pollution Control Authority. “The overflow is very diluted raw sewage that can overflow for a short period of time. This happens very rarely.”

Residents are unhappy that DEEP, as enforcer of federal clean-water laws, gave the city so many years to fix its overflow problems. Although DEEP’s records show that most overflows are legal, residents say they have witnessed other spills that they believe aren’t documented, such as the scene in Clough’s photo.

“People look in the water, and they’re just shocked,” said resident Bruce Williams, who runs his family’s Captain’s Cove Seaport, a complex of shops, a marina, and restaurant that also leases space to sailing teams. On a recent Sunday, he said, “People from Long Island were staring at it. It looks like a horror movie. They were just stunned.”

The Culprit: The Plant

Part of the problem is the way the West Side facility operates. The Bostwick Avenue plant, built in the 1940s and last upgraded in 1996, is three times larger than the city’s east side plant and handles the majority of the city’s waste. Stormwater and waste together are pumped into the plant, and then travel through treatment by gravity. On a dry day, 18 million gallons enter the plant, which is designed to handle 30 million gallons a day. On a wet day, as much as 90 million gallons can enter the plant’s main raw sewage pumps. Usually one pump operates, but in heavier flows, up to four pumps move the water.

Over a 12-hour period, the waste normally circulates through three screening tanks, where human feces, sanitary napkins, tampons, condoms and other items are screened out. Then the water enters tanks where the remaining solid material is allowed to settle to the bottom. These solids are later trucked to landfills. The water then continues to aeration tanks, where sprayers speed up the breakdown of bacteria. Next chlorine is added, and then bisulphate is added to dechlorinate the water.

But if a flow equal to more than 58 million gallons per day enters the plant, the facility enters “bypass mode,” which speeds up and eliminates some steps in the process. During this mode, the system screens out solids, chlorinates the water, dechlorinates it, and then discharges it. The level of rain that triggers a bypass depends entirely on the accumulated water level in the street. Some official documents list the amount of rain that triggers this as four-tenths of an inch in 24 hours. 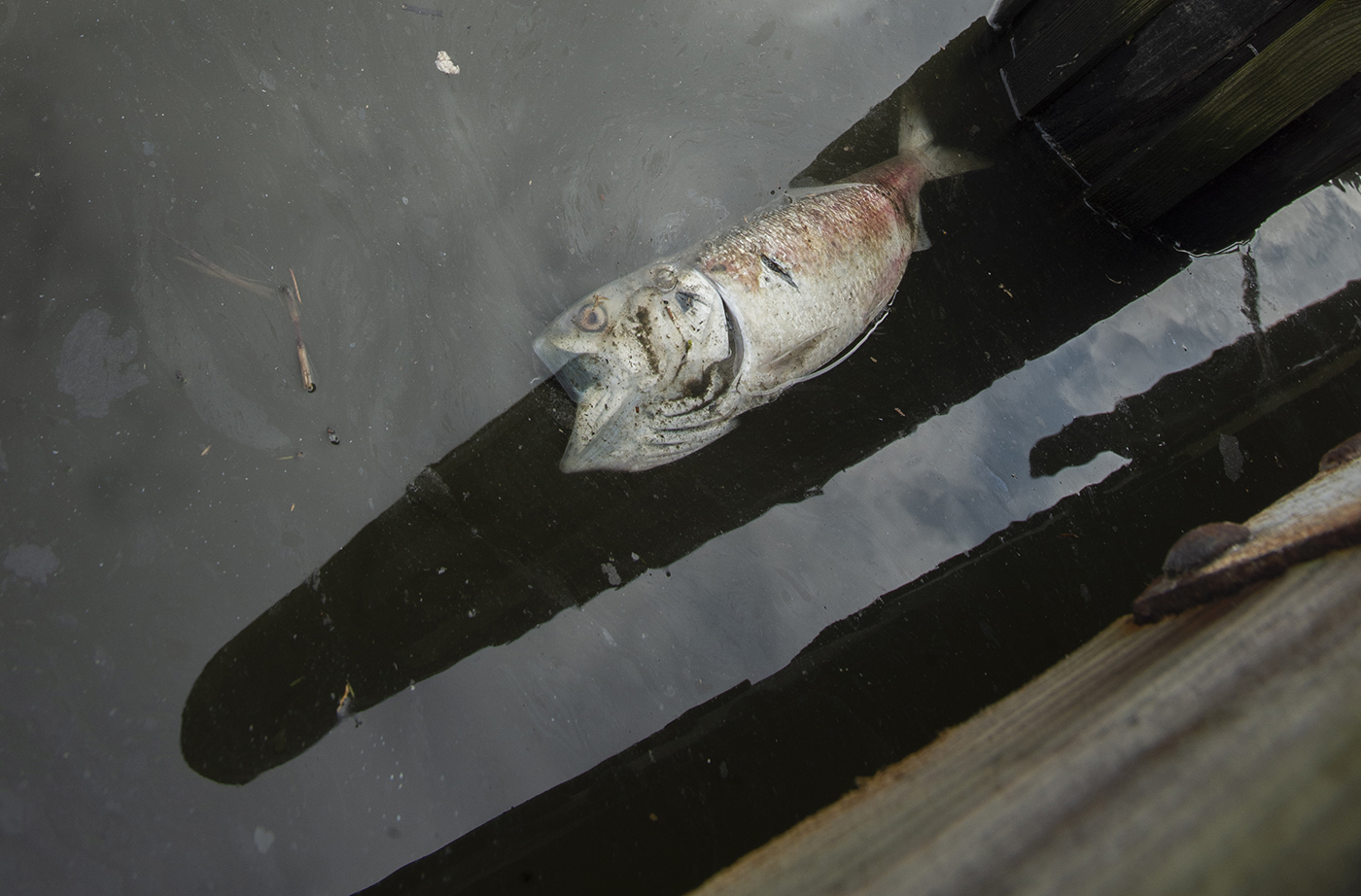 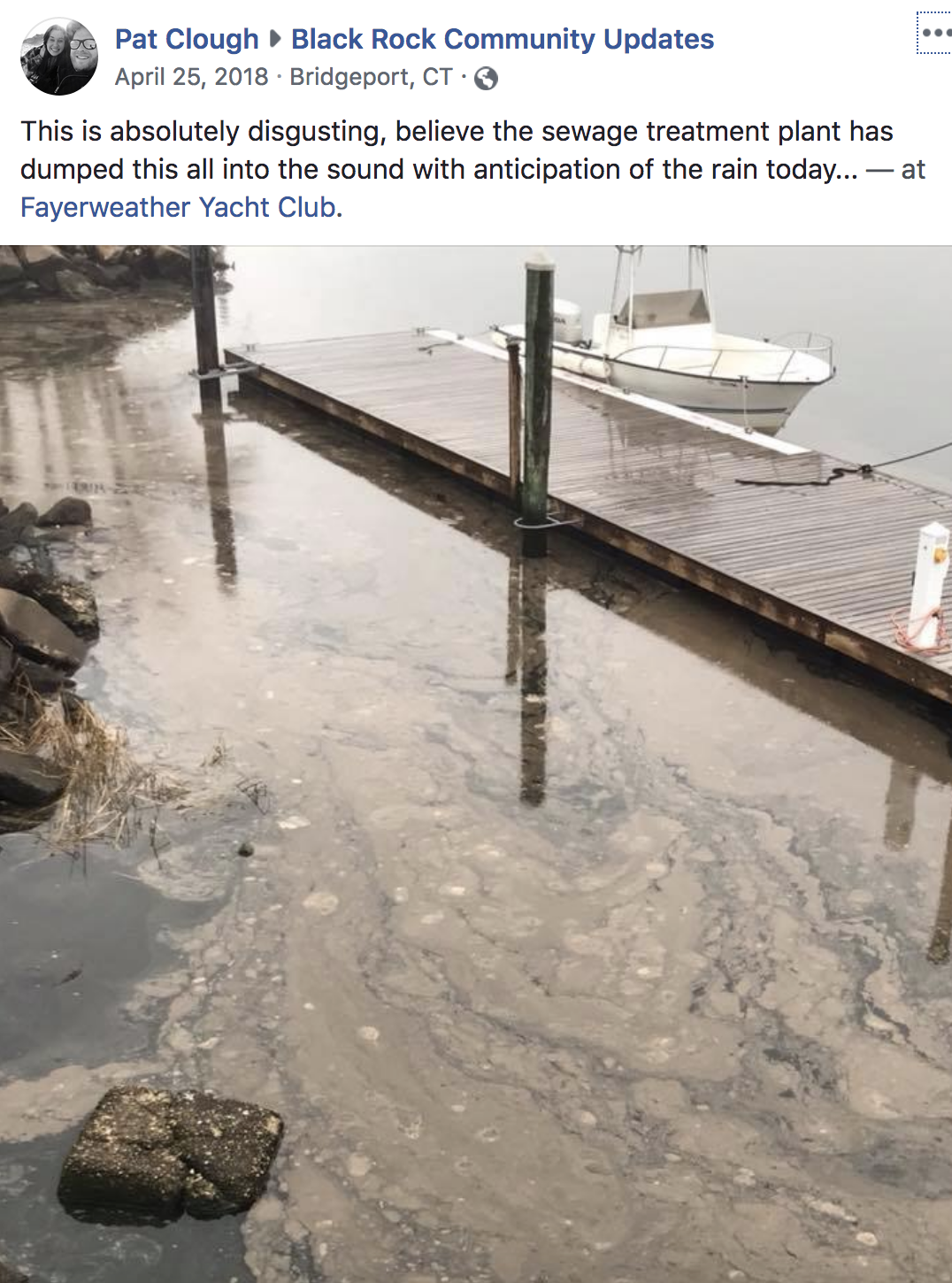 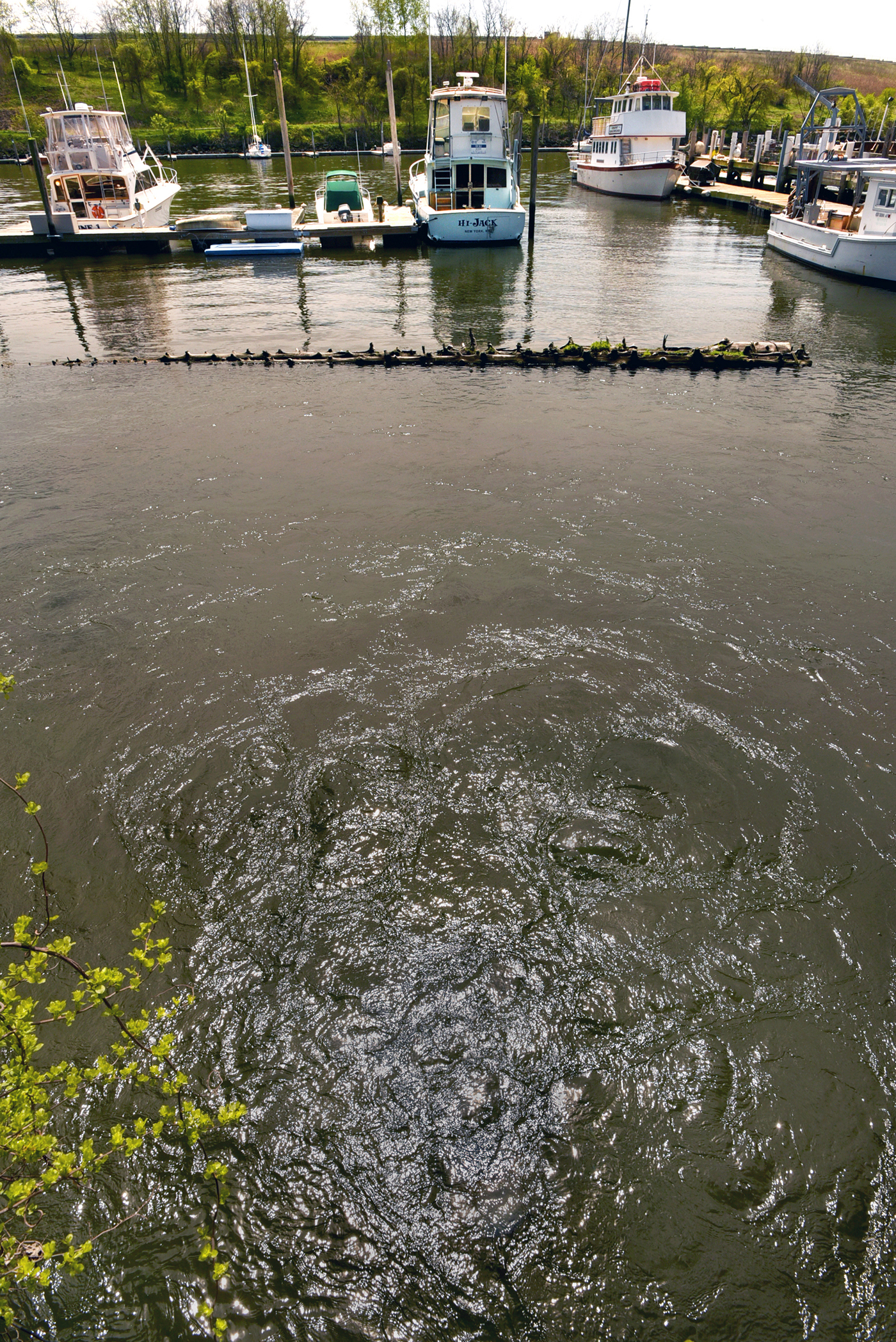 Brown water bubbling out of the 72-inch waste discharge pipe in Black Rock Harbor in May. Melanie Stengel Photo. 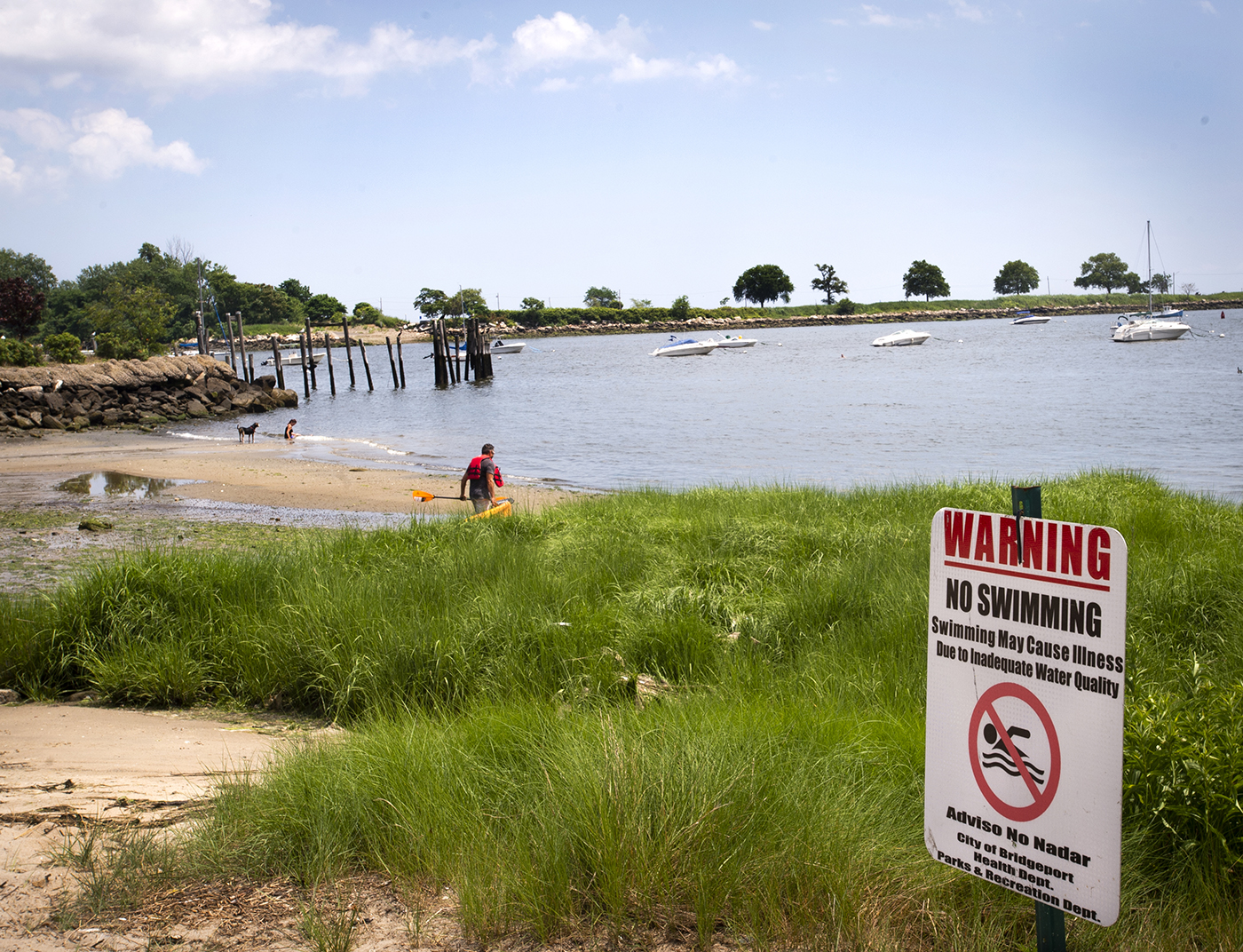 Seabright Beach was closed to swimming most of the summer but that didn't stop people from wading and boating in the waters. Melanie Stengel Photo. 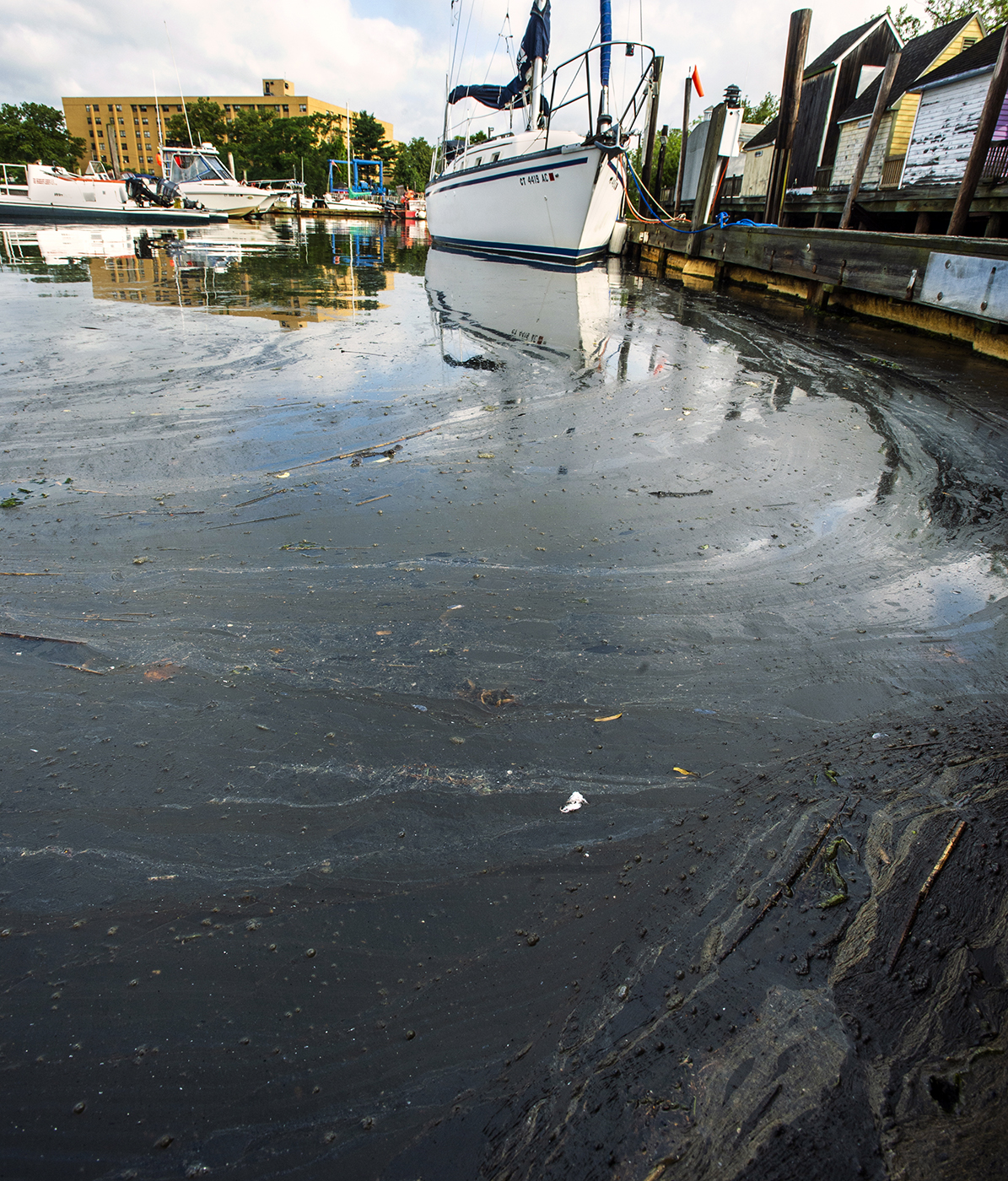 A murky slick foam filled with materials lingered in Black Rock Harbor after the West Side plant legally released more than 1 million gallons during a heavy rainstorm on July 12. Melanie Stengel Photo. 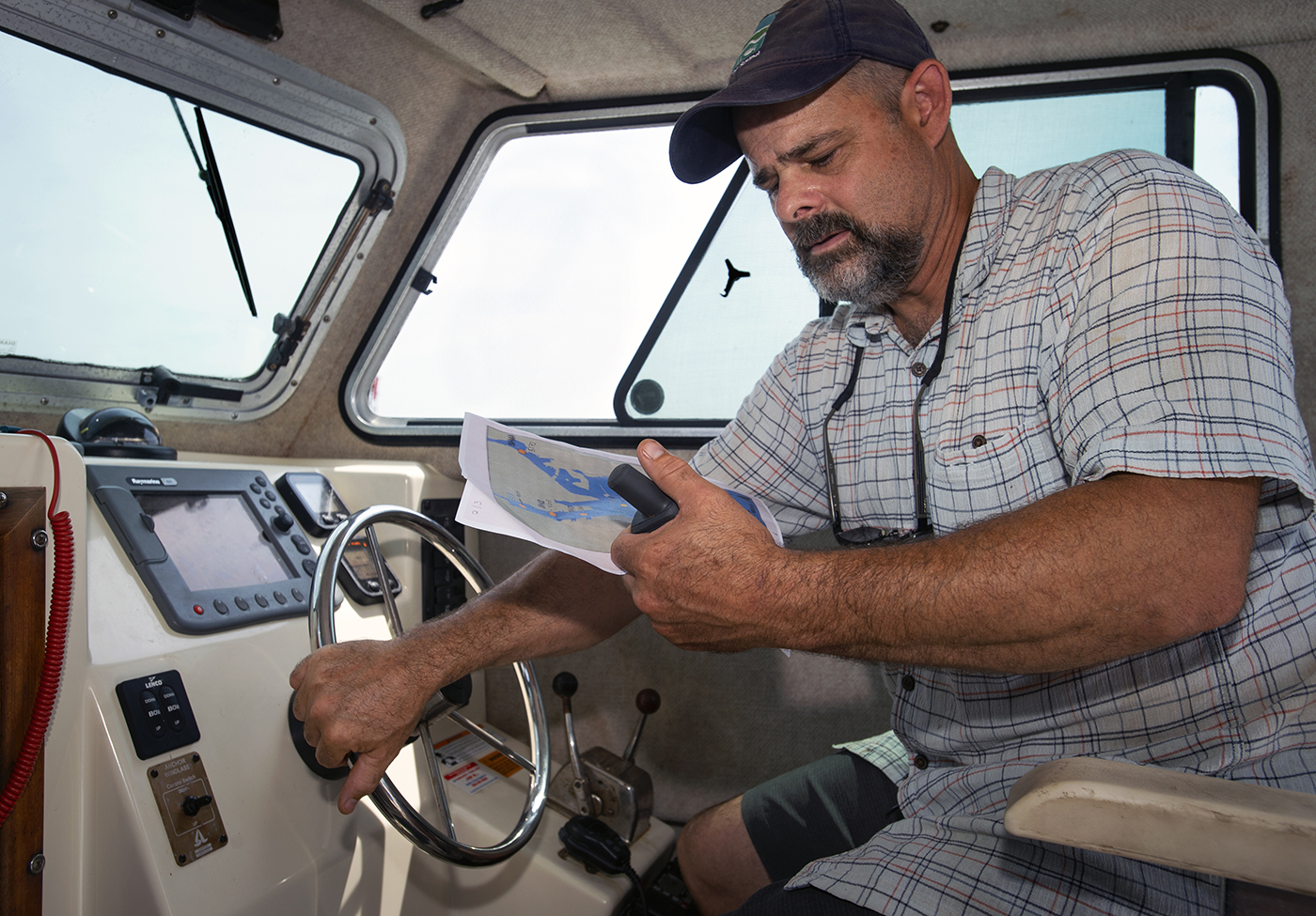 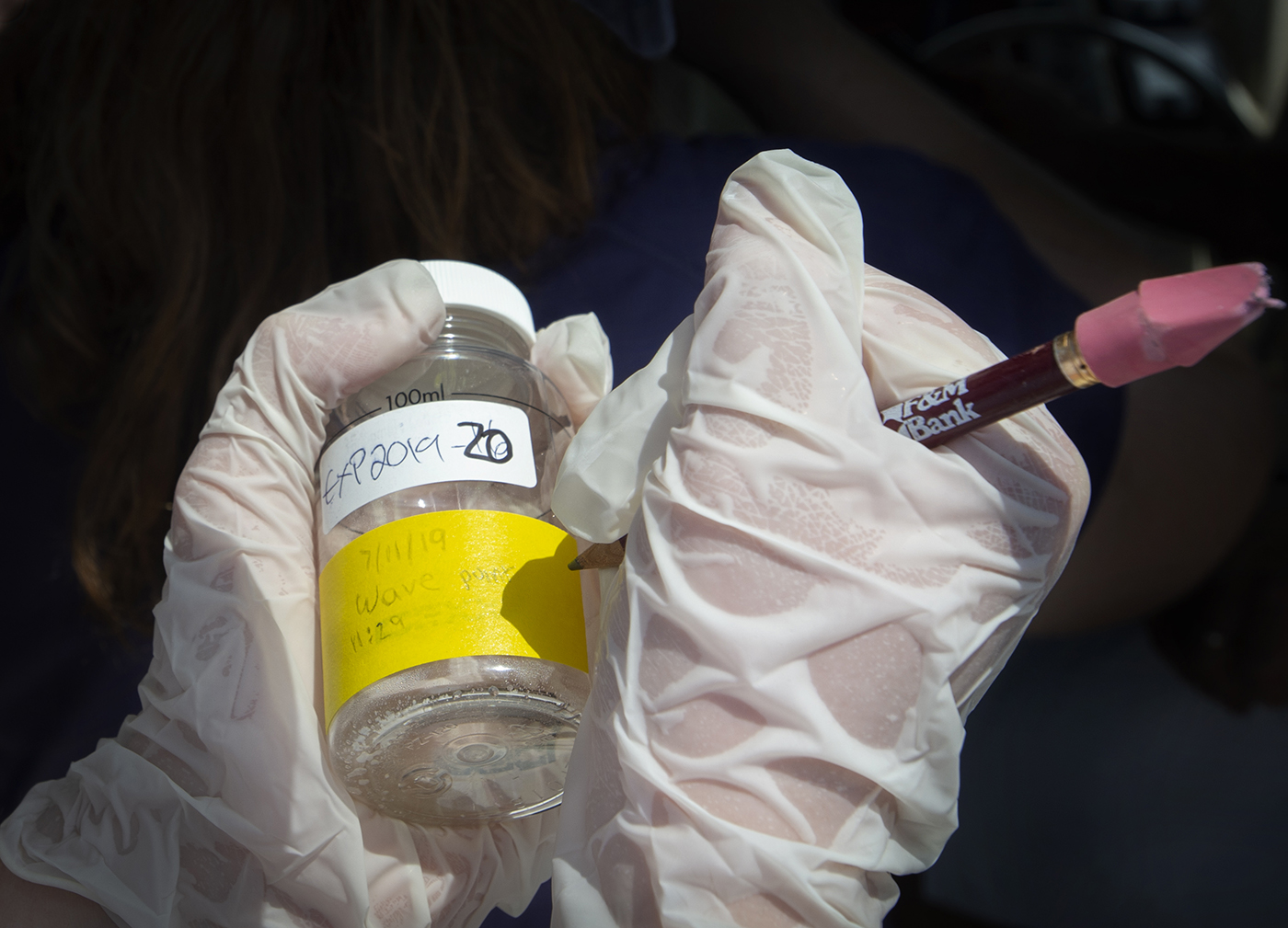 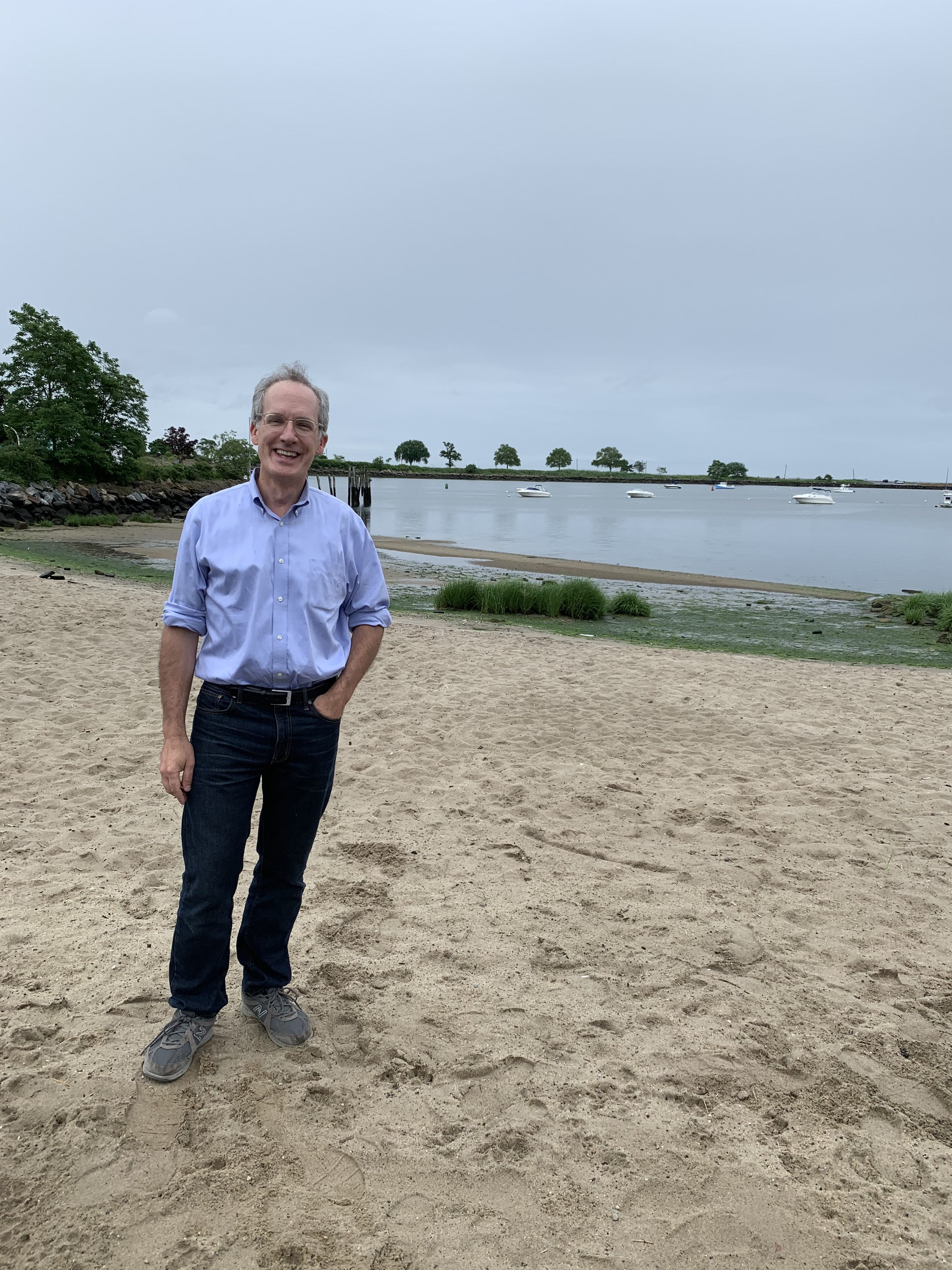 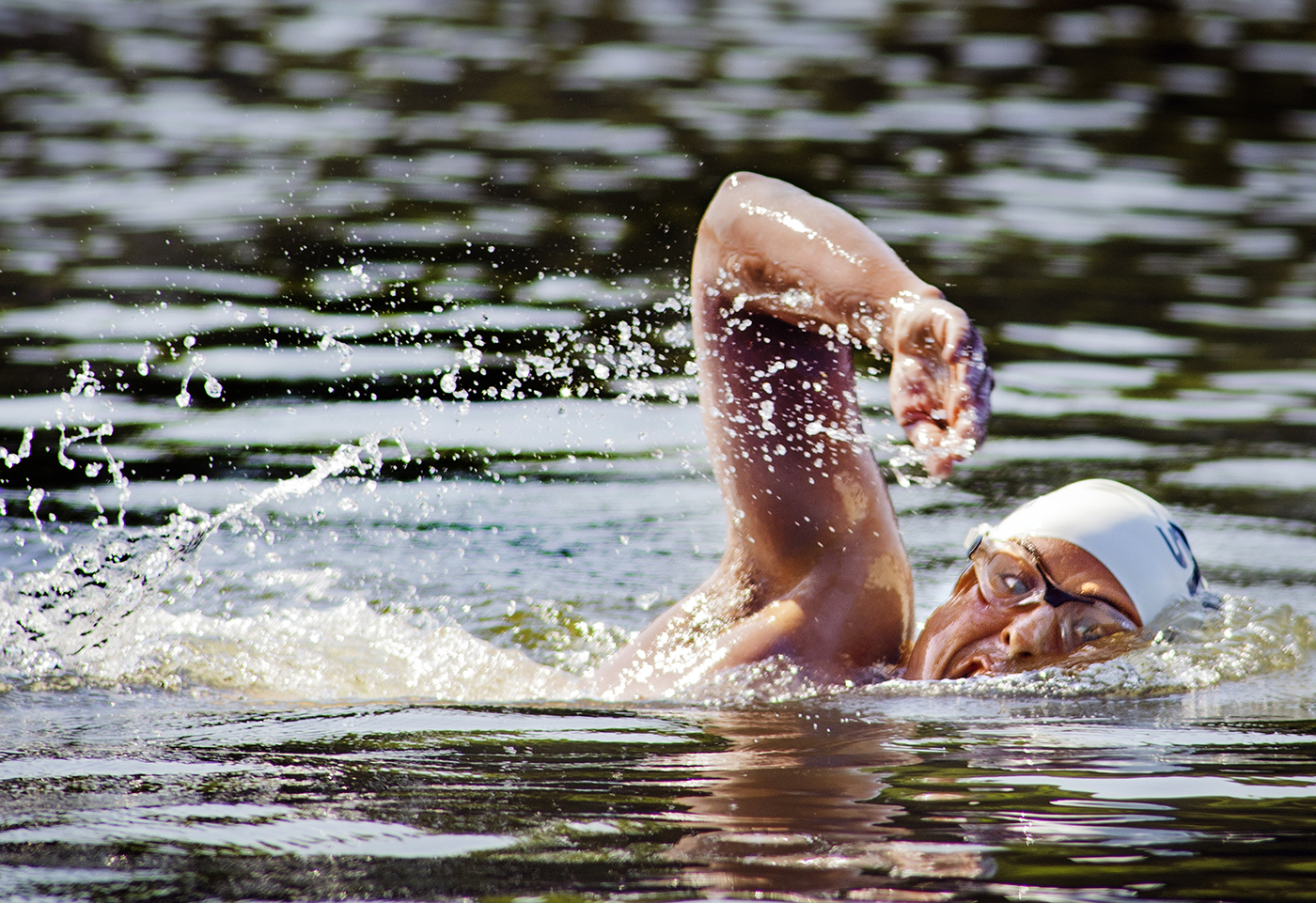 Nikko Price of New Haven was this year's winner of the swim across the sound, ending in Captain's Cove near the city’s largest sewage discharge pipe. Melanie Stengel Photo. 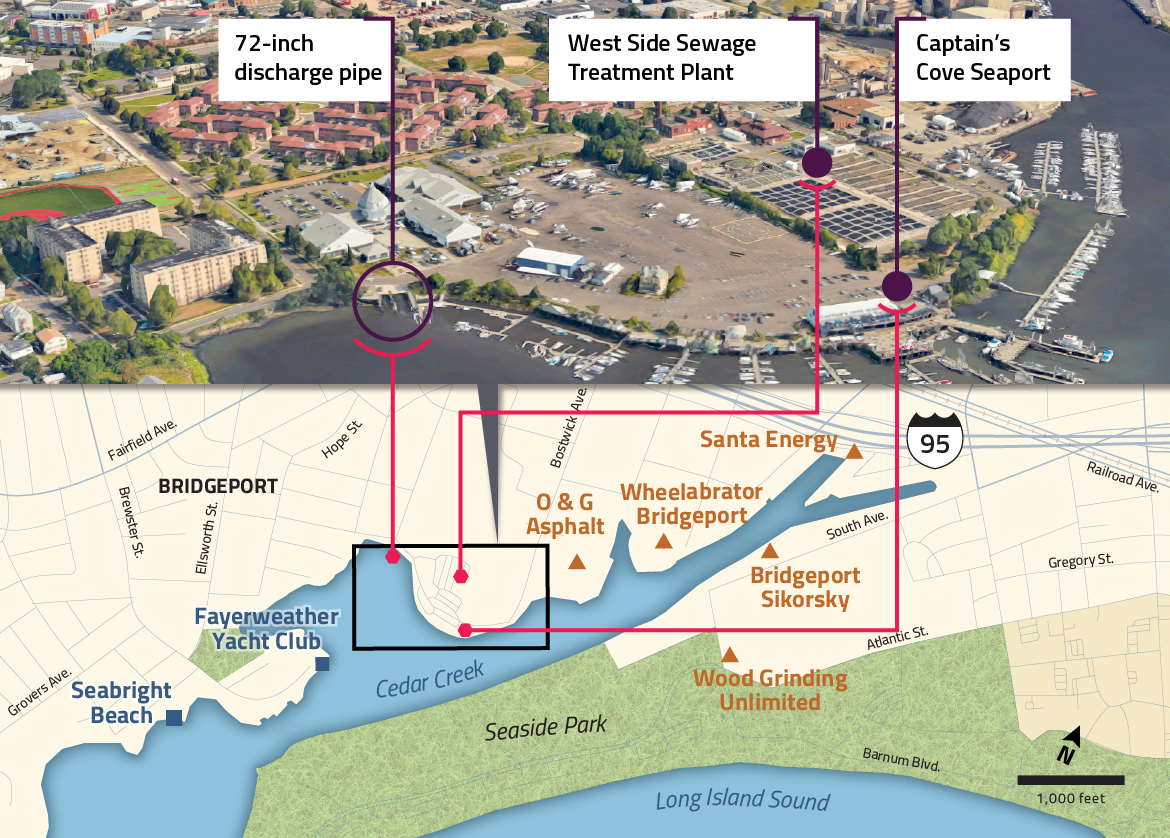 Since last year, DEEP has issued two administrative correction orders to the city, including one in 2019 that addressed the April 2018 permit violations. A June 2018 order requires the city to stop all discharges out of its CSO pipes by 2039. Eleven projects separating stormwater pipes from sewage pipes must begin by 2021. Some of this work has begun. An order issued earlier this year sets deadlines for fixing sludge processing and nitrogen removal systems that malfunctioned earlier. Construction on those must begin by the end of 2022.

Captain’s Cove rents the city-owned waterfront across Bostwick Avenue from the West Side sewage plant. Williams’s office overlooks the sewage discharge pipe. “I’m here every day. This happens all the time. I will go down to check that no condoms or sanitary napkins are floating in the shipway.”

So much is unknown about health threats in this water. But human contact with fecal contamination can result in gastrointestinal sickness like norovirus, respiratory illness, ear and eye infections, and rashes, health experts report. Regular water-quality testing is geared to the swimming season at some public beaches.

Bridgeport tests some of its beaches for bacteria that can indicate fecal matter and therefore disease-causing microbes. Swimming beaches like the neighborhood’s Seabright Beach, about 200 yards from one of the CSO pipes and 800 yards from the main discharge pipe, were closed for swimming most of the summer. The nearby Seaside Park, one of the most popular destinations, was rated “D+” for high bacteria by Save the Sound, a program of the Connecticut Fund for the Environment.

For 13 years, Kevin Blagys, who owns KB Dive Services, has been diving in Fairfield County waters. Wearing a wet suit and snorkel gear, and holding a scrub brush in one hand, he cleans the barnacles and particles off boat bottoms. As he swims underwater, he passes through striating sections of brown and clear water. Sometimes the visibility is so bad he can only see a few inches. As the summers progress, the quality of his work zones worsens with floating black mud and the combination of heat, sun and nitrogen that makes hypoxia—oxygen too low to support life. He then hauls out dead horseshoe crabs. In some years, he has steered his small boat through slicks of dead menhaden, fish that typically thrive on Connecticut’s coast.

Blagys, a native of Greenwich, has been frustrated for years by the water quality in Black Rock Harbor, where “we have a discharge pipe at the end of a dead-end harbor.” 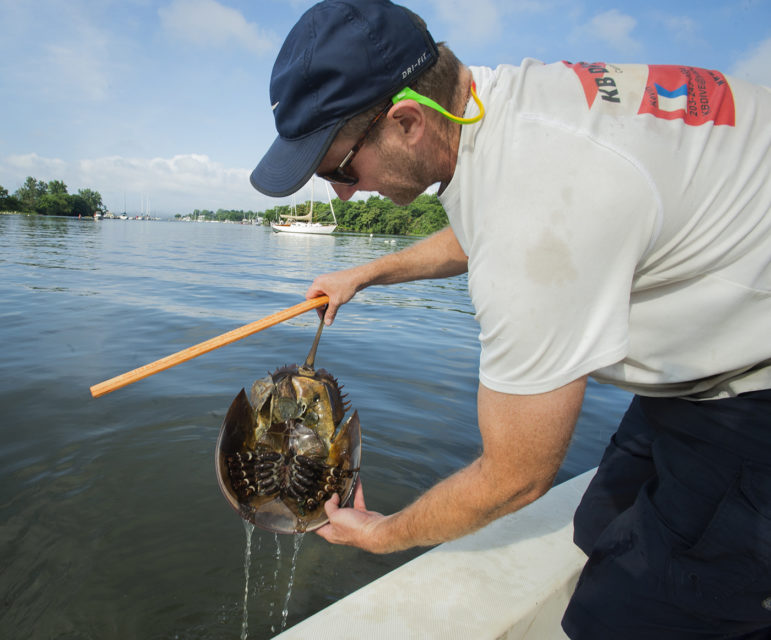 Living and working so near the discharge pipe gives people in the area a sense of the water’s condition, Blagys said. “The whole neighborhood knows when it’s gross and when it’s not normal.”

Bill Lucey, the Long Island Soundkeeper, a watchdog scientist for Save the Sound, has docked his research and education boat at Captain’s Cove since spring 2018. This year he tested for dissolved oxygen in the water near the sewage discharge. In mid-August he was recording oxygen saturations of 0, the result of nitrogen from the sewage discharge combined with heat and light. High levels of nitrogen result in harmful algae growth.

The harbor could handle some nitrogen, Lucey said, “but that is only OK if it’s being discharged into a pristine environment,” which Black Rock Harbor is not. “The whole system is overloaded.”

Lucey thinks nitrogen levels should be lower than they are, but Mappa said nitrogen tests at the plant’s outflow between July 29 and Aug. 2 were “all very good numbers.”

Everyone agrees Black Rock Harbor is polluted. Residents called Peter Spain, their 130th District City Council member. He organized a public information meeting on the plant’s permit, attended by Save the Sound, DEEP, business owners, and residents, including some students. Residents hoped to share their concerns, but DEEP engineer Ann Straut spoke for much of the reserved time in a local school auditorium. She explained in detail each step required to plan, approve, fix and check plant upgrades. Public questions were cut short. Lucey trimmed his presentation on the health of the water in Long Island Sound to a few minutes.

Residents, business owners and students had already decided to take part in a regional Unified Water Study of Long Island Sound, coordinated by the Connecticut Fund for the Environment. Spain helped fund the study out of his City Council stipend.

Although Blagys never got a chance to address the meeting, he said he would have told those in attendance, “I’ve maintained boats underwater throughout the [Black Rock Harbor] and western Long Island Sound, from Milford to Greenwich. Of all the harbors—like Milford and Norwalk and Southport—Black Rock Harbor stands alone. It is clearly the most stressed environment.”

Visit the Save the Sound, Sound Health Explorer to view bacteria levels and other information here.

Coming Thursday, Part 2:  A catalog of West Side plant malfunctions and sewage discharges into Black Rock Harbor; how sewage problems persist in other cities.

Coming Friday, Part 3: Black Rock area residents, including high school students, spent the spring and summer cruising the harbor and Long Island Sound gathering water samples for testing. They’re part of the Long Island Sound Unified Water Study, and like many living and working in the area they’re tired of the smelly, brown-slick water and beaches closed to swimming.