Last May, Samantha Collins’ drug use, legal problems and dealings with the Connecticut Department of Children and Families forced her to strike a bargain with the agency. 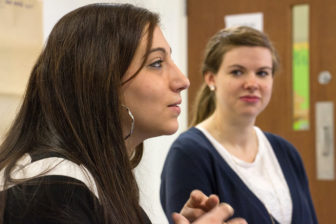 Samantha Collins tells how the Family-Based Recovery program helped her stay at home to care for her children while receiving addiction treatment. Looking on is Chelsea Gouldsbrough, a support specialist.

In return for allowing social workers to come into her home three times a week to help her stay off drugs, improve her parenting and learn the practical skills needed to function as an adult, DCF would not remove her children.

The 26-year-old Somers mother of 2- and 7-year-old boys entered Family-Based Recovery, a program created 10 years ago by DCF, the agency better known, perhaps, for separating families than working to keep them together.

Family-Based Recovery, or FBR, is an example of DCF’s dramatic reversal in philosophy and practices, after years of a policy approach based largely on removing children thought to be at risk and placing them in congregate care facilities.

“‘Pull and ask later,’” said Kristina Stevens, a former DCF social worker who is now administrator of the agency’s Clinical and Community Consultation and Support Division, which includes a fast-growing array of in-home treatment programs.

As recently as 2011, nearly 1,500 children and youths were separated from their families and were living in 54 group homes and other treatment centers in and out of Connecticut. Another 2,300 children and families were served in a dozen intensive in-home treatment programs.

Today, about 5,000 children and families receive mental health, substance abuse and other clinical care through DCF programs—a 24 percent increase since 2011—although most of those programs are part-time and not residential.

In 2016, social workers, clinicians and other mental health professionals from a dozen DCF programs —at a cost of about $26 million—provided in-home treatment. Just 500 children now live in congregate care or residential care, Stevens said –a 66 percent reduction since 2011. As of May, just three lived out of state.

The shift to in-home care—part of a national movement—has not been without controversy, as some critics say it can be driven by cost-savings, rather than a need for more extensive and sometimes necessary residential care.

Counselors in one in-home treatment program—IICAPS (Intensive In-Home Child and Adolescent Psychiatric Services)—for example, worked with 2,259 families in 2016, helping children with serious mental health challenges. Child First went to the homes of 547 children who live in environments marked by violence, neglect, mental illness or other stress-inducing conditions. Another program provided in-home clinical intervention for 80 adolescents with problem sexual behaviors and their families.

Richard Wexler, executive director of the National Coalition for Child Protection Reform, said Connecticut is “miles ahead of most states” in understanding the importance of home-based treatments. He was adamant that even if a parent is a substance abuser, “Separating a child from his mother is more toxic than cocaine” in how it harms the child.

“There was a belief that by virtue of going into [congregate] care, a level of intensive treatment came with it. That wasn’t always the case,” Stevens said. “So when you meet a family benefiting from a family-based recovery experience, they’re actually seeing their treatment providers more than a youth who would have been in a congregate setting.”

Family-Based Recovery—created after seven months of brainstorming and planning in 2006 by DCF, the Yale Child Study Center and Johns Hopkins University—may be the poster child for the department’s about-face.

DCF had sought help, knowing that children under age 3 experience the highest rates of abuse or neglect, and that alcohol or drugs play a role in half the foster care placements in this age group.

Drug treatment programs generally focus just on substance abuse, Hanson said, while parenting programs don’t factor in substance abuse. Parents with both challenges can founder, with one problem exacerbating the other.

FBR’s tenet is that taking a baby from a substance-abusing parent not only damages the child, but also can remove a parent’s motivation to become sober.

“The pleasure of bonding with a baby and the satisfaction of providing competent care can reinforce abstinence,” Hanson wrote in a 2015 article. “There are times that removal has to happen. But if you take away that child, the parent can think, ‘There’s no reason I shouldn’t use.’”

Since 2007, 1,850 families, most headed by single mothers, have participated in FBR. The program costs the state $3.7 million a year, which covers Yale’s oversight, training and data analysis for contracts with six social service agencies around the state. Each agency sends teams of three—two clinicians and a family-support specialist—to work with families.

FBR targets parents at a vulnerable point: They must have abused drugs or alcohol within 30 days of starting the program. This is one reason why, from the onset, a safety plan is developed, dictating what steps a parent will take to protect her children if she uses. Program incentives include earning $10 vouchers for each clean drug test and participating in weekly group sessions with other FBR parents.

DCF and Yale’s measures show that parents’ levels of depression decrease the longer they are in FBR, and that the decline in substance use is more significant than for all other substance abuse treatment programs.

The crucial measure: When the family is discharged, 85 percent of the children were still living with their parent.

The results are promising enough that DCF will add 500 more families, with a child between 3 and 6, during the next four years. Money from a private-public partnership will cover the expansion, to be repaid by the state only if the program succeeds.

Findings from DCF’s wide range of in-home treatment programs, as presented on its online report cards, show that more than 70 percent of children and families served in the past three years met treatment goals. 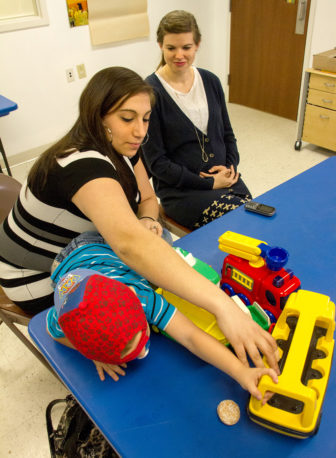 Samantha’s young son reaches for a toy in a playroom in the Manchester office of The Village for Families and Children.

State Child Advocate Sarah Eagan, often a critic of DCF, said of Family-Based Recovery: “Certainly, the model seems like a good idea. There is such a need for reliable, intensive interventions and supports for caregivers with substance abuse treatment needs.”

Collins, who worked with a team from The Village for Families and Children, graduated after 12 months in FBR. She gives the program “five stars,” but concedes she has a ways to go.

She dropped out of high school and became pregnant at 19, starting to abuse opiates after her first son, Jacob, was born. Her life got more complicated after Jayden was born, she said, and she started taking cocaine.

The family came to DCF’s attention when Jacob, a first-grader, refused to go to school. “It was just easier for me to let him be truant,” Collins said.

When she was arrested for shoplifting, Collins said, she “got lucky.” The judge didn’t order jail time. She got Family-Based Recovery.

During her time in the program, which included three relapses, Jacob returned to school and Jayden was enrolled in B23, the state’s program for young children with developmental delays. “I learned how to work with him,” Collins said.

She also learned about community resources available to help the family, how to budget and, with her caseworker’s help, found an affordable apartment so she and her sons could move out of her parents’ home.

She said getting her GED is next.

4 thoughts on “DCF’s New Strategy: Treating Children And Families In Their Own Homes”