Connecticut saw one of the highest increases in the nation in preventable deaths from unintentional injuries from 2010 to 2014, mainly because of a spike in opioid overdoses, according to a new report from the Centers for Disease Control and Prevention (CDC).

Connecticut had 1,142 unintentional injury deaths in 2014— the second highest in New England, after Massachusetts. About half (568) were accidental drug intoxication deaths, according to the Office of the Chief Medical Examiner. The number of such deaths is expected to surpass 850 in 2016, Chief Medical Examiner Dr. James Gill projected earlier this year.

Gill said he was not surprised that the CDC report showed a sharp increase. 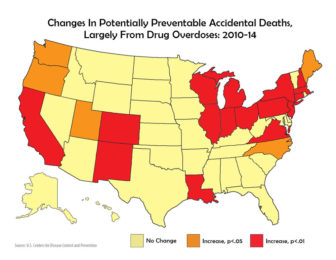 “The 97 percent increase in potentially preventable accidental deaths is disappointing, and from our own data, the drug intoxication deaths are certainly a big part of it,” he said Monday. He said the office’s overall autopsy numbers “are not decreasing, and we are still investigating a high number of drug intoxication deaths each week. Today alone, we had five.”

The CDC report estimated preventable deaths using a formula comparing the number of expected deaths with the number of observed deaths in 2010 and 2014.

Jack Malone, executive director of the Southeastern Council on Alcoholism and Drug Dependence, said the report reflected what his organization saw from 2010 to 2014 – “a spate of overdose deaths happening with scary frequency.”

He said that, unlike the men and women in their 30s and 40s who have historically come in seeking help to quit alcohol and drugs “with their hands up,” heroin users are younger and usually are “chased into treatment” by the courts or family members.

“If they make it to 35, they’re enormously lucky,” Malone said. Those whose lives are spared by Narcan (naloxone), an opioid overdose antidote, often go right back to using drugs, he added.

“You can’t knock Narcan, but you also can’t look at it as the problem-solver,” he said. “This is a very challenging population.”

Gary Mendell, founder and CEO of Shatterproof, a non-profit organization that advocates for addiction treatment and prevention, praised Gov. Dannel Malloy and state lawmakers for tightening prescription monitoring, expanding access to Narcan, and making other changes to reduce overdose risks. But he said, “There’s no question that more can be done,” and he urged the state to adopt the CDC’s recent recommendations for opioid prescribing for patients with chronic pain.

Among the recommendations are that primary care providers treat patients with non-opioid therapy, whenever possible; start patients on the lowest effective dose of opioids; prescribe three days or fewer of opioids for treatment of acute pain; and avoid concurrent prescribing of opioids and benzodiazepines. State adoption of the guidelines “would be a big step to saving lives and reducing the (overdose) number substantially,” Mendell said.

Meanwhile, on other causes of death, the CDC report includes some good news for Connecticut.

The CDC report includes national and state-specific death rates for people under the age of 80 for the five leading causes of death, which represented 63 percent of all deaths in 2014. The CDC estimates that 15 percent of those cancer deaths, 30 percent of heart-disease deaths, 43 percent of unintentional-injury deaths, 36 percent of CLRD deaths, and 28 percent of stroke deaths were preventable.

“Fewer Americans are dying young from preventable causes of death,” CDC Director Dr. Tom Frieden said in releasing the report. “Tragically, deaths from overdose are increasing . . . and there are still large differences between states in all preventable causes of death, indicating that many more lives can be saved through use of prevention and treatment available today.”

The report cites progress in early detection and treatment, as well as a 12-percent decline in the age-adjusted death rate from lung cancer, as key drivers in reducing preventable cancer deaths. Similarly, it credits improvements in care and reductions in risk factors such as hypertension for the decline in death rates from heart disease and stroke.

Of the increase in preventable accidental deaths, the report cites efforts in some states to reduce drug overdoses by enhancing prescription drug monitoring programs; increasing access to naloxone; and tightening opioid prescribing guidelines – as Connecticut has done.

Connecticut recently was awarded $5 million in federal money to increase access to medication-assisted treatment for opioid addiction and to strengthen prevention efforts. The treatment grant targets states based on rates of treatment admission for heroin and opioids, prioritizing those that have seen the largest recent increases.

One thought on “Overdoses Fuel Increase In ‘Preventable’ Accidental Deaths”

Leave a Reply to Common_Tator