Aliya Hernandez is a 17-year-old junior at Kennedy High School in Waterbury who had her fair share of heartbreaks and lost friendships. 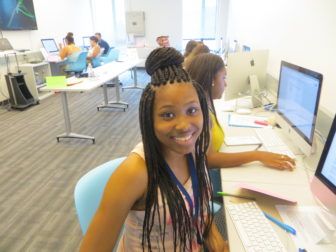 “Someone is always doing something on the other side,’’ she said.

Hernandez said she suffers from depression, and that has caused people to criticize her sometimes. She had a falling out with a friend, whom she knew for seven years. She also lost an aunt to breast cancer. Both of the situations led to her depression, she said.

Hernandez is very open and described herself as a “a big fighter, a savage, intelligent, sneaky and outgoing.”

After altercations with people close to her, Hernandez said she has decided to focus on herself and go about all of her relationships in a cordial manner. She said these battles helped her to stop depending on others. She said she used to have the mindset that she couldn’t live without certain people, but people letting her down changed her outlook. She said she has stopped calling people “best friend” quickly.

Hernandez said that after she grasped this lesson, her life got more positive and happy. She was able to try new things. She got her license, got a job at Sun Kee Kitchen in Waterbury, won a Leadership Youth Award in 2015, a newspaper award for four consecutive years, and an Afro-Latin American Scholarship.

Hernandez, who is of Puerto Rican descent, is the middle child of Eddie Hernandez and Michelle Santiago. She has five brothers and three sisters, and only her sister Amaya and she have the same parents.

Hernandez said she loves kids and takes time to teach a first-grade religious class. This has influenced her to pursue a career as an author, an English teacher or a journalist.

Latrise Malcolm is a student at Achievement First, Hartford Academy.