Bianca Cruz’s Navy career started with a job she loved on a ship in Japan, but after she was sexually assaulted by a sailor, her military life spiraled downward, ending with a “bad paper” discharge after serving 20 months.

“If it weren’t for the sexual assault, I would still be in Japan,” said Cruz, 22, a Navy hospital corpsman, who returned home in November 2015.

Cruz is among the thousands of sexual assault victims who have been pushed out of the military with a less than honorable discharge, according to a Human Rights Watch report released in May, Booted: Lack of Recourse for Wrongfully Discharged US Military Rape Survivors.

The Navy diagnosed Cruz with a “personality disorder,” which the Rights Watch report said the military regularly uses to trigger quick dismissals of sexual assault victims.

Cruz is appealing to the Navy Discharge Review Board, requesting that her discharge status be upgraded from general (under honorable conditions) to honorable. 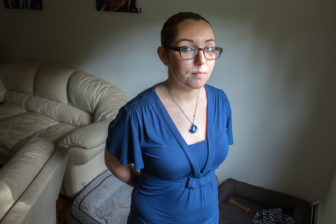 Bianca Cruz of Hamden is appealing her discharge status.

Her current discharge status prevents her from receiving G.I. education benefits and re-enlisting in the military. It also carries a stigma that can affect employment. It does provide her with medical benefits and entitles her to a veteran’s burial.

Margaret Kuzma, an attorney with the Connecticut Veterans Legal Center, which is representing Cruz, said, “A discharge upgrade will remedy all these injustices.”

An upgrade to an honorable discharge would also remove the characterization on her discharge papers that states “condition, not a disability,” which refers to personality disorder, Kuzma said.

“I want it to be fixed. I don’t deserve it,” Cruz said of her discharge status in a recent interview.

For some, the effects of less than honorable discharges are often “far-reaching for veterans … impacting employment, child custody, health care, disability payments, burial rights—virtually all aspects of life,” the Rights Watch report said.

Cruz was transferred to Beaufort, South Carolina, after her assault so she could get away from her attacker. Under stress, she attempted suicide while there.

She was discharged after being accused of labeling a medical cart with the wrong code, which was cited as a lack of attention to detail.

She denied the allegation and asked for a court martial but was turned down.

When Cruz returned home she received medical treatment at the VA Connecticut Healthcare System’s West Haven campus. She was diagnosed with post-traumatic stress disorder (PTSD), a debilitating condition that was attributed to her sexual assault. The VA did not diagnose her with a personality disorder, which the military considers a pre-existing condition not eligible for disability benefits.

Kuzma said Cruz’s behavior in South Carolina was a result of her “…struggle with the undiagnosed PTSD symptoms from the assault.” Kuzma said a military diagnosis of a personality disorder “is always a red flag.” She said the legal center has never seen a case where the diagnosis was later confirmed by another doctor.

Margaret Middleton, the law center’s executive director, said, “People are being sexually assaulted in the military and then kicked out because of behavioral problems and manifestations of the sexual assault. That’s horribly unfair.”

Middleton said she is grateful to Cruz for her willingness “to speak about it because that’s the hardest part.”

Cruz grew up in East Haven and lives in Hamden with her husband, William, a Navy veteran; their infant son, Matthew; and a trained service dog that helps her deal with her PTSD. Her dog accompanies her to her job at a VA call center in Newington.

Cruz has applied to the University of New Haven to study forensic science and hopes to get educational financial assistance under the VA’s Vocational Rehabilitation and Employment Program, which placed her in her job. She isn’t eligible for GI education assistance, which “is a much richer benefit,” Kuzma said.

Cruz was one of some 20,000 sexual assault victims in the military in 2014, according to Pentagon estimates. She said her attacker told Navy investigators that he was too drunk when he was with her to recall whether a sexual assault occurred. He was not punished.

Since 2013, U. S. Sen. Kirsten Gillibrand (D-NY) has been unsuccessfully urging Congress to give the decision of prosecuting military sexual trauma cases to independent military prosecutors instead of commanders.

The advocacy group Protect Our Defenders recently released a study stating that Pentagon officials misled Congress in testimony about effectiveness of the commanders’ role.

The Rights Watch report recommends that the military give special consideration to requests for discharge upgrades from sexual assault victims with PTSD. It notes that PTSD is significantly more prevalent among sexual trauma victims than combat veterans, with about one in three sexual assault survivors suffering from PTSD compared to 10 percent to 18 percent of combat veterans.

Kuzma said it is important to seek discharge status upgrades from military review boards even though the odds are daunting. “Attorneys can slowly force them to confront the reality that veterans are being improperly discharged and those discharges affect them for the rest of their lives,” she said.

“It’s advocacy 101. If you don’t bring these cases because you think you’re going to lose, then nothing ever changes,” she said.