People who are uninsured or on Medicaid are more than twice as likely to smoke tobacco compared to those covered by other insurance, according to a national study by the Centers for Disease Control and Prevention.

The CDC, which examined data from the 2014 National Health Interview Survey, published the findings in November. The CDC found that cigarette-smoking rates were higher among people who live below the poverty level (26.3 percent) and people with a GED certificate (40 percent). 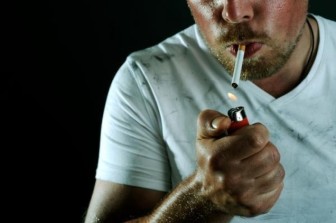 Among smokers, men are more likely to smoke than women.

Overall, the prevalence of cigarette smoking among adults declined from 20.9 percent to 16.8 percent from 2005 to 2014, according to the CDC.

Trends similar to those nationwide have emerged in Connecticut, according to state data and health care providers.

In 2013, about 480,000 people, or 18 percent of the adult population, in Connecticut smoked, according to the state Department of Public Health (DPH). The greatest share of smokers, 32.2 percent, lived in households where the annual income was less than $25,000, according to DPH, while another 10 percent were in households with incomes between $25,000 and $34,999.

State data show men are more likely to smoke than women, and cigarettes are the most commonly used form of tobacco.

Topping $9 a pack in Connecticut, cigarettes can be an expensive habit but many low-income smokers use them to cope with “life stressors,” said Rose Pudlin, director of community outreach at Fair Haven Community Health Center in New Haven. The clinic provides services, including smoking cessation programs, to a population comprised largely of Medicaid enrollees and uninsured people.

“There are a lot of socioeconomic barriers that our patients face in day-to-day life and one of those coping mechanisms is smoking,” she said. “It is a habit that’s hard to kick and easy to keep.”

Connecticut’s Medicaid program is among the most aggressive in the nation in trying to help enrollees kick the habit, according to the CDC.

It is one of only nine state Medicaid programs that in 2015 covered individual and group cessation counseling as well as all seven U.S. Food and Drug Administration-approved smoking cessation medications, according to the CDC.

Connecticut’s HUSKY Health/Medicaid Program has expanded its coverage of tobacco cessation programs in recent years, according to David Dearborn, spokesman for the state Department of Social Services (DSS), which administers the program.

In 2013, group smoking cessation counseling was added as a billable service for medical and behavioral health clinics and federally qualified health centers. Last year, hospital-based outpatient clinics were added to the list of providers that could bill for and provide group counseling, according to Dearborn.

“In light of the relatively high incidence of individuals served by Medicaid nationally and in Connecticut who use tobacco, covering a broad range of cessation activities—medications, patches, counseling and group support—is an essential component of our prevention and chronic disease self-management agenda,” said Kate McEvoy, Medicaid and health services director at the DSS.

DSS Medical Director Robert Zavoski added: “Fifty years after the birth of Medicaid and 50 years after the original surgeon general’s report linking tobacco to lung cancer, Medicaid enrollees still smoke at rates far above the national average. Connecticut Medicaid members deserve, and now have, the tools to kick this horrible habit, once and for all.”

For about the past year, Fair Haven health clinic has been able to offer smoking cessation support group programs to Medicaid enrollees and uninsured patients thanks to funding from DSS and DPH, respectively, Pudlin said, and patients are grateful to have access to tools they need to quit.

“That essentially allows us to do smoking cessation programs across the spectrum, regardless of insurance status,” she said.