Despite studies that may have turned off older women from taking calcium supplements, experts and new findings say there is no increased risk of having cardiovascular problems – if women communicate with their doctors and take the supplements properly.

“I don’t think women should be overly concerned about taking calcium supplements in the recommended doses,” said Dr. Jaime Gerber, an associate clinical professor of medicine and clinician in the cardiology department at the Yale School of Medicine.

There is “no real clear indication” that taking calcium supplements heightens people’s risk for cardiac ailments, he said.

Traditionally, many women – particularly those who are approaching menopause or who are post-menopausal – have taken calcium supplements in an effort to ward off osteoporosis, a disease that reduces bone density and affects women more commonly than men.

About 54 million people in the United States are affected by osteoporosis and low bone mass, according to the National Osteoporosis Foundation, and that number is expected to jump to 64.4 million by 2020.

Most people with osteoporosis or low bone mass are white women, according to the non-profit advocacy group.

But calcium supplements have at times been controversial.

Several years ago, warnings put a damper on the supplements’ popularity. Some doctors warned that that calcium contributes to plaque that can build up in arteries, therefore posing cardiovascular risks.

In 2013, the U.S. Preventive Services Task Force recommended that postmenopausal women not take calcium (or Vitamin D supplements) to prevent fractures. It reported that there was “insufficient” evidence that the supplements posed any benefit to pre-menopausal women and men.

The task force is an independent, volunteer panel of health experts authorized by Congress.

Research conducted last year by Brigham and Women’s Hospital in Boston found no link between calcium supplement intake and an increased risk of coronary heart disease or stroke. Researchers cited the Nurses’ Health Study, an observational study of more than 74,000 women with 24 years of follow-up.

“Our findings do not support the hypothesis that calcium supplement intake increases CVD (cardiovascular disease) risk in women,” the researchers wrote. 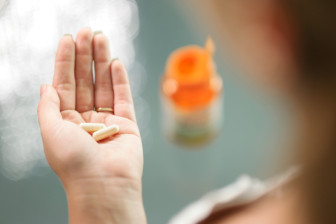 The women included in the study had their calcium supplement intake monitored every four years. During 24 years of follow-up, 4,565 “cardiovascular events” occurred among the women and supplements were found not to have played a role.

In addition to not posing a heightened risk, that study found that women who took calcium supplements were more physically active, smoked less and ingested less fat than those who did not.

While it is true that calcium can contribute to plaque buildup, Gerber said, “there’s not any reasonable sign” that supplements contribute to heart disease or heart attacks when individuals’ calcium intake is within the recommended daily dose of 1,000 to 1,200 milligrams.

“People who have high calcium levels for long periods of time can get faster calcifications,” he said. “But it’s not been clear that that actually leads to blockages in the arteries.”

Still, women – and patients in general – need to be aware of how much calcium they are ingesting, said Bradley Biskup, lifestyle medicine coordinator at the Pat and Jim Calhoun Cardiology Clinic at the UConn Health Center in Farmington.

While supplements can help people reach the daily recommended calcium amount, many people forget that they also get calcium from foods they consume, he said.

Someone who has milk and yogurt each day, for instance, doesn’t need to take as many milligrams of a calcium supplement as someone who does not, Biskup said. Patients should only take as much supplement as they need to get to their total calcium intake up to the daily recommendation, he said. Some may not need any supplements, he added.

Patients who are urged to take supplements should be sure their doctors know what their daily diet consists of, Biskup said. Better yet, he said, people should try to get the recommended intake from unprocessed foods – such as nuts, particularly almonds.

“We’re so focused on the supplements helping us” that many people don’t focus on diet and the vitamins and nutrients foods have, he said.

“Most people, when they look at a (food) label, they’re looking at calories or sodium” and ignore the calcium content, he said.

It’s an important thing to be aware of, he said, since in addition to becoming part of the plaque that can lead to artery blockages, excessive calcium can also increase the risk of kidney stones.