Allowing the spouse of a person in a nursing home to keep enough money to live on independently is, in many ways, a moral issue.

But in a tight budget year in Connecticut, it’s a fiscal issue.

A proposal that would increase the minimum assets that a spouse living in the community can keep — from $23,844 to $50,000 – in order for his or her partner to be eligible for Medicaid nursing home care is being backed by elder advocates, who say the increase would help seniors, especially women, remain able to live independently. But the move is being opposed by the Department of Social Services on the grounds it will shift millions in costs to the state-funded Medicaid program. 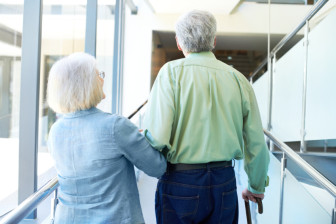 The proposal would affect couples with combined assets of between $23,844 and $100,000. Currently, when qualifying for Medicaid, couples split their assets evenly, and the nursing-home-bound spouse must spend down his or her portion to $1,600. That means if a couple has $60,000, each spouse gets $30,000, and the institutionalized partner must spend his or her share down to $1,600, usually by paying for initial nursing home care. Under the new proposal, the community spouse would be able to keep $50,000 in assets.

By reducing the amount of money assigned to the institutionalized spouse, he or she would become eligible for Medicaid assistance sooner. One month of accelerated eligibility for 30 clients per month, for example, would result in a net cost to the state of about $1.1 million a year, according to a fiscal note on the proposed change. Those costs could multiply, as some enrollees could have three or four months of accelerated Medicaid eligibility.

But elder law attorneys backing the change say the state’s financial worries are shortsighted and overstated. Allowing the community spouse – often the wife — to keep $50,000 could keep her out of poverty, off government programs, and in the couple’s home, they argue.

“It’s hard enough for a spouse to deal with putting a loved one in a nursing home,” said attorney Jack Reardon of New London, president of the Connecticut chapter of the National Academy of Elder Law Attorneys. “We don’t need to yank the rug out from under them . . . These are people already of meager means. This is a way to offer them some protection.”

Attorney Matthew Stillman of Guilford, the organization’s public policy director, noted that the state has shifted its focus away from institutional care for the elderly, to community-based care.

“If the state’s goal is to keep people in their homes, in the community, why wouldn’t we give them the means to do that?” he said.

Stillman and other supporters of the bill say that raising the asset allowance for spouses could save money in the long run by keeping the spouses off public assistance longer and by giving them a cushion for health or other emergencies that could otherwise impoverish them.

“If we deprive a healthy spouse of the basic resources they need for independent living, we increase the likelihood that she/he will prematurely follow their spouse into a nursing home,” the Connecticut chapter of the AARP said in testimony to the legislature.

Stillman said the couples affected by the change are people of modest means.

“We’re talking about people who have lived their whole lives and have less than $100,000,” excluding the value of a home and car, he said.

In all states, federal Medicaid law provides special protections for the spouses of Medicaid applicants, to make sure they have some minimum support to continue to live in the community while their partner is receiving long-term care, usually in a nursing home. But states have the right to decide how much the non-institutionalized spouse may keep, within a range.

Connecticut’s allowance — $23,844 – is the lowest allowed. A number of other states, including Massachusetts, Vermont, Maine and Illinois, provide the highest allowance — $119,200 – according to testimony from the Connecticut Bar Association. At that highest level, the wife in a couple with $100,000 in assets could keep the entire amount, and Medicaid would pick up the nursing home tab.

Connecticut historically has had the lowest spousal allowance permissible, with the exception of 2010-11, when the legislature raised the allowance to the maximum level for one year — then lowered it back down.

In recent testimony, DSS maintained that the current policy is “fair and reasonable and supports the original intent” of the federal government’s spousal protection policy. The agency said the state’s minimum was “in line with most other states.”

The potential savings from keeping spouses more financially solvent are hard to gauge. The proposed bill would require the state to report back on the costs and savings associated with the change.

Medicaid nursing home care costs an average of $6,000 a month in Connecticut, according to estimates.