Justin Eldridge’s family will never fully understand why nothing seemed to ease the anguish of the young Marine and father of five, as he wrestled with post-traumatic stress disorder and traumatic brain injury after a deployment to Afghanistan in 2004-05.

Despite stints in VA hospitals and an array of medications, he killed himself in his Waterford home on Oct. 28, 2013. He was 31. 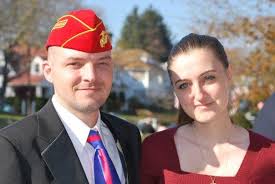 “He did his part – he followed the treatment they gave him,” said his widow, Joanna Eldridge, who is now raising their children alone. “It just wasn’t enough, in terms of following up with him and figuring out why he wasn’t getting better . . . We just have to do better at helping these guys after they get home.”

A new study suggests that the suicide risk for Eldridge and other veterans who served in the recent wars in Iraq and Afghanistan is significantly higher – 41 to 61 percent higher — than for the general population. The study, led by Department of Veterans Affairs and Army researchers, is the most comprehensive look to date at the suicide risk for veterans who were on active duty during the recent wars.

The analysis – to be published next month in the journal Annals of Epidemiology — found that the suicide rate was the highest among veterans during the first three years after leaving military service, and that the risk was elevated for both deployed and non-deployed service members. Suicide rates were not significantly different for those who deployed once, like Eldridge, and those who deployed multiple times.

The study notes that before the Iraq and Afghanistan wars, the suicide rates among active duty and former military personnel had been 20 to 30 percent lower than the U.S. general population. But the recent wars are “substantially different” from Vietnam or the first Gulf War, with veterans serving longer tours, deploying multiple times, and suffering different kinds of injuries, many from blasts.

In addition, absent a draft, the recent conflicts may have attracted more volunteers “who may have a higher level of risk taking behaviors” and who face economic stress and employment problems when they transition home.

The study comes as U.S. Sen. Richard Blumenthal, D-Conn., pushes efforts to revive a suicide prevention bill that died last year. The bill, which passed the House earlier this month, would require an outside review of existing suicide-prevention programs at the Department of Defense and the VA to gauge their effectiveness, and make recommendations for improvement. It also calls for more online and community outreach mental health services and includes incentives to attract psychiatrists to work with veterans.

Dubbed the Clay Hunt Suicide Prevention for American Veterans Act – named for a Texas Marine who killed himself in 2011 — the bill was blocked last year by Republican Sen. Tom Coburn, who has since retired from the Senate.

The new study does not propose reforms to stem veterans’ suicides, but instead examines patterns within the 1,868 suicide deaths of veterans who had served between 2001 and 2007 and who left the military during that time. It identified suicides through Dec. 31, 2009. About 1.3 million military members served on active units between 2001 and 2007 and separated from active duty before the end of 2007.

In contrast to prior studies, the review found that deployment to the war zone did not contribute to an elevated suicide risk. In fact, after controlling for age, sex, race and other factors, veterans who had deployed were at a slightly lower risk of suicide than those who had never deployed.

The authors speculated that troops with psychological and behavioral problems may have been held back from deploying, and that troops who did deploy might have received more screening, counseling and treatment than those who did not.

Male veterans were three times more likely than females to kill themselves, the study found. But the suicide risk for women veterans, when compared to women in the U.S. population, was greater than the difference in risk between male veterans and civilians.

In terms of overall deaths, veterans had a 25 percent lower “all-causes” mortality risk, compared with the general population. The authors attributed that lower risk to the so-called “healthy soldier effect”: Military members are believed to be healthier than the general population because of the initial screening for service, requirements to maintain certain standards of physical fitness, and access to medical care.

Blumenthal, who has called the suicide prevention bill his “first priority,” has cited Eldridge’s death in discussing the need for legislation. The two men had met when Eldridge helped to form a chapter of the Marine Corps League in southeastern Connecticut, Blumenthal said.

“I cannot express in words how deeply sorry I am that (Eldridge’s) treatment evidently proved unsuccessful – perhaps not the result of the VA or its doctors or its hospital, [but] because we are only beginning to learn as a country and society how to confront post-traumatic stress and traumatic brain injury with the specialized diagnosis and care that these diseases demand,” Blumenthal said in a speech on the Senate floor last fall.

Joanna Eldridge, who was in Washington, DC, Tuesday to attend the State of the Union Address as Blumenthal’s guest, said she supports the proposed bill and wants to help bring attention to the need for more resources for veterans with PTSD.

In the five years before Justin’s death, she said, he struggled with depression and alcohol and drug addiction. After his first suicide attempt, in 2008, the VA told the couple that Justin would have to wait three weeks for specialized treatment, she recalled. She contacted her congressman, U.S. Rep. Joseph Courtney, and Blumenthal, then the state’s attorney general, to intervene. The VA admitted Justin three days later.

While she is grateful for the help her husband did receive, Joanna said, “I just don’t feel like he got the correct treatment. There was a lot of changing his medications – sometimes he’d be in a zombie state.” She became his full-time caregiver, supporting him as he kicked alcohol and drugs – but watching helplessly as he spiraled into despair.

“I think he just had enough of the pain,” she said. “He didn’t want to see it and feel it anymore.”