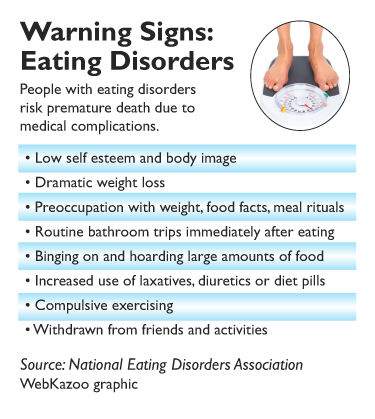 Thousands of Connecticut adults and children – some as young as 10 – struggle with eating disorders with many suffering secretly because the life-threatening psychiatric condition has gone undiagnosed and untreated, experts in the field report.

“We used to see eating disorders start at 13 or 14. Now we frequently see 10- and 11-year olds,” said Dr. Diane Mickley, founder and director of the Wilkins Center for Eating Disorders in Greenwich, which has treated females and males for three decades. Mickley is a founder and past president of the National Eating Disorders Association (NEDA). “We’re concerned that there are many boys and girls flying under the radar who could be struggling with eating disorders that aren’t diagnosed or treated,” said Craig Brown, a founder and chief executive officer for Center for Discovery, which since 2011 has opened two adolescent residential treatment centers in Fairfield County for youth ages 11 to 17.

“We’ve been getting calls throughout the years that have progressively involved younger and younger children.”

An estimated 30 million Americans have eating disorders such as anorexia, bulimia and binge eating disorder, reports NEDA. In Connecticut, 3.4 percent of the population has an eating disorder with females twice as likely to be afflicted than males, according to statistics cited by the National Association of Anorexia Nervosa and Associated Disorders.

Anorexia has the highest mortality rate of any psychiatric illness, reports the National Institute of Mental Health.

In Connecticut, an increasing number of younger teens overall and Hispanic teens in particular engaged in disordered eating between 2009 and 2011, according to the most recent data available from the Centers for Disease Control and Prevention (CDC) in its Youth Risk Behavior Surveys. Disordered eating refers to harmful behaviors – such as restricting your food intake – that could lead to an eating disorder.

Among the Connecticut findings from the CDC:

• Nearly 18 percent of ninth grade girls surveyed in 2011 (compared to 12.2 percent in 2009) indicated they had not eaten for 24 or more hours during the previous 30 days due to weight considerations.

• Food restriction rates were higher for Hispanic teens (11.9 percent) compared to their African American (8.4 percent) and white (8 percent) peers in grades nine through twelve in 2011.

“It’s a pressing public health issue. These are serious psychiatric disorders that can lead to death,” said Rebecca Puhl, deputy director of the Yale Rudd Center for Food Policy and Obesity.

What Are Eating Disorders?

A combination of biological, psychological and social factors cause eating disorders. Anorexia is characterized by self-starvation and excessive weight loss. People with bulimia have recurring binge-and-purge cycles, consuming large amounts of food, followed by self-induced vomiting, over-exercising or the use of laxatives. People with binge eating disorder (the most prevalent type of eating disorder) eat very large amounts of food, but they do not engage in purging behaviors.

“You die looking beautiful,” said Natalie Hoeffel, site director of the Renfrew Center of Connecticut in Old Greenwich, referring to the unseen internal bodily damage. “People see a good-looking young woman who looks like a model. Her family says she’s healthy because she exercises three hours a day and swims and plays lacrosse. But they don’t understand that she is going to drop dead on the field if we don’t get her into treatment.”

While definitive answers remain elusive, experts point to a “perfect storm” of factors that may be contributing to the growing number of youth with disordered eating – relentless pressure from trusted adults to excel academically and athletically, misguided attempts by society to fight obesity, and the barrage of social media messages glorifying thinness.

“It’s tougher to be a kid these days. It’s really stressful,” said Jennifer Henretty, director of outcomes and research for Center for Discovery. “But it’s not easy being a parent, either. Society gives us messages that we should push our children to be well-rounded and top achievers. But many of these factors may be setting up children to be at an increased risk for eating disorders.”

The focus on body mass index (BMI) – an indicator of fat based on height and weight – doesn’t help matters. “Medical providers focus on keeping people’s weight under control without thinking about quality of life issues and someone’s natural body type,” said Margo Maine, of West Hartford’s Maine & Weinstein Specialty Group and a founder and past-president of NEDA.

Even a well-intended health class can backfire. “We see lots of eating disorders triggered by a health class that focused on the consequences of being overweight. Students begin restricting food and dieting which is the entrée to eating disorders,” said Dr. Sara Niego, medical director of the Eating Disorders Program at Hartford Hospital’s Institute for Living. Social media exacerbates the problem from the pressure to look good on Facebook and Instagram to the “pro-ana” (pro-anorexia) and “pro-mia” (pro-bulimia) sites filled with “thinspirational” messages and how-to tips. “Youth are avid consumers of mass media,” said Puhl. “We need to look closely at the messages and values associated with body weight and fitness and how they are being internalized by kids.”

Adults are vulnerable, too. “People think Facebook is just for the young. But there are many women at home on the computer who are worried about looking good in selfies,” said Hoeffel.

In fact, many eating disorder experts report treating more older women in their thirties through seventies. “Age does not immunize people from eating disorders,” said Maine. “There is tremendous pressure on women to be everything and everything includes being feminine which means being thin, pretty, fashionable and having the right body type.”

Although early intervention can lead to a full recovery, many people don’t seek treatment due to denial and the inability of health care professionals to recognize early symptoms. Other challenges include inadequate insurance coverage and societal pressure to be thin. Just last month, NEDA criticized clothing retailer J. Crew for creating a new triple zero size.

“A woman who walks into a doctor’s office having lost 20 to 25 pounds gets accolades for losing the weight but no questions about how she lost the weight,” said Maine.

Identifying males with eating disorders can be tough because they are more secretive and shun treatment. Nationwide males comprise 5 percent to 15 percent of people with anorexia and bulimia. One study found a third of teen boys used unhealthy weight behaviors, while another study estimated up to 40 percent of binge eaters are males.

“Physicians, psychologists and social workers are less likely to detect an eating disorder in boys and men because they’re just not looking for it,” said Rebekah Bardwell Doweyko, program director of Walden Behavioral Care in South Windsor, which opened in 2012. “Even when they do admit to having a problem, men are less likely to seek treatment because they’re ashamed of having what they consider to be a ‘female’ illness.”

“Boys will take extreme measures to fit into a certain weight class and those behaviors can lead to an eating disorder,” said Doweyko. “Sometimes coaches can inadvertently make these behaviors worse with their demands. Coaches have a huge role and responsibility in protecting the health of their athletes.” Cultural nuances can impact the onset of eating disorders, report experts who work with patients from Hispanic, African American, Indian, Asian, Jewish and other backgrounds.

Some studies suggest women of color become more susceptible to eating disorders as they assimilate and internalize prevailing values regarding beauty and weight.

Hispanic teens “straddling two cultures” with differing ideals at home and school can pose difficulties that can lead to disordered eating, said Henretty, noting that Hispanics comprise 12 percent of the teens treated by Center for Discovery nationwide.

Involving and educating families – no matter what their ethnic background – is crucial to the recovery process. One Hispanic family, for example, blamed their daughter’s condition on her enrollment at a predominately white suburban school.

“There’s a feeling at times among people of color that the eating disorder experts don’t understand their family,” said Niego.

While challenges abound, advocates believe increased awareness about the dangers of eating disorders will benefit people of all ages and backgrounds on the road to recovery.

“These are curable illnesses,” said Mickley. “There are many reasons to be hopeful.”