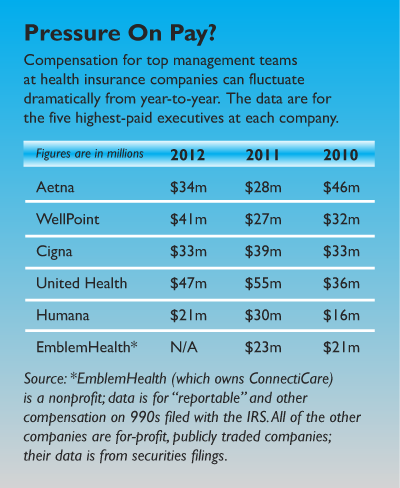 But it doesn’t seem to have happened yet.

The highest-paid executive at each of the “Big Five’’ health insurers – UnitedHealth Group, Aetna Inc., WellPoint Inc., Humana Inc. and Cigna Corp. – made more than $8 million in 2012, according to filings this spring with the Securities and Exchange Commission. The CEO of EmblemHealth Inc., a nonprofit that owns ConnectiCare, also had total compensation at that level in 2011, the last year for which information is available. WellPoint, which owns Anthem Blue Cross/Blue Shield of Connecticut, insures more state residents – 1.2 million – than any other company, according to the Connecticut Department of Insurance.  Compensation for its top five executives totaled $41 million.

“The public wants money to go to health care services,” said Ken Ferrucci, senior vice president of government affairs at the Connecticut State Medical Society. “It’s very frustrating. When I have conversations with physicians, they think about services they could provide with that money.”

Compensation packages at corporations across all industries have come under close scrutiny in recent years. Pay generally is based on a company’s performance, but some critics question whether health care should be different. The system, they say, rewards executives for raising premiums, reducing coverage and denying claims in order to strengthen their bottom line.

“The thing about health care is we’re dealing with people’s lives. There’s an economic dimension and a moral dimension,” said Janet Davenport, vice president for communications at the Universal Health Care Foundation in Meriden. When pay is tied to financial performance, doing well means saving money by denying claims, she said.

The insurers argue that top pay gets top executives. These jobs are difficult and personally demanding, and pay has to be competitive. In 2012, according to Equilar, an executive compensation data firm, health care executives – including health insurance – were the highest paid on average across all industries.

Robert Zirkelbach, spokesman for America’s Health Insurance Plans, a national trade association representing the health insurance industry, said compensation for health insurance executives should be no different than for executives at other companies. “The rules … should be consistent across all industries,” he said.

Companies are feeling the heat. Equilar says they are spending more space in their filings explaining compensation packages. They also are proactively reaching out to shareholders to answer questions and respond to criticisms – especially in the wake of “say on pay” legislation that gives shareholders an advisory vote on compensation. And they are linking compensation more closely to management performance.

The Affordable Care Act limits the amount of money an insurer can spend on overhead – non-medical — costs. Some activists are optimistic that it will help to contain executive compensation. Lisa Lindsley, director of capital strategies for the American Federation of State, County and Municipal Employees, said that will depend on how “non-medical costs” are defined and how insurance companies choose to distribute their overhead costs.

“It’s one thing to say, ‘Do CEOs of health care companies need to make a fair wage to attract talented management.’ It’s another thing to make millions and millions of dollars,” she said. She said that when companies benchmark against each other, compensation spirals out of control. “No one wants to be average,” Lindsley said.

Ferrucci hopes the growth of nonprofit insurance exchanges will transform the way the for-profit companies do business. There seems to be a growing understanding of the need for compensation that provides an incentive for quality care, he said.

The insurance companies do want to provide a good care, Ferrucci said. “It’s in their best interest,” he said. But he added that the consolidation of the insurance market has greatly reduced competition in Connecticut. Consumers have little choice, he said.

It’s hard to say today how public pressure and new laws have affected compensation. Pay levels vary widely from company to company and from year to year, depending on how compensation packages are structured and how a company has performed. In addition, executives who’ve been in place several years tend to make more than those who have just joined a company.

“In an ideal world, health care executives would be compensated based on health outcomes,” said Tom Swan, executive director of the Connecticut Citizens Action Group. “I would much prefer to see something that really made their compensation be pegged to how healthy the policyholders were.” Pay could be based on standards of care or other health metrics, he suggested.

“I view health care as more of a social insurance and a public need and less of a commodity. We should prioritize care and quality over profits,” Swan said.

He expects to see change over the next several years as competition from nonprofit exchanges rises. Lindsley predicts that it will happen slowly – and unevenly. “If companies have a good year, all bets are off,” she said.

At the Universal Health Care Foundation, Davenport argues that executives should be fairly compensated but adds that people have a right to quality, affordable health care. To say that high salaries detract from quality of care is too simplistic, she said, but it’s emblematic of the way the system works.

“People don’t begrudge good incomes. But when is enough ever enough?” she asked. “Insurers are definitely feeling the pressure. How they will respond is still in question.”