Ten-year-old Joey Smith shared a celebratory high-five with Heather Kunkel, a mental health professional who was visiting the boy’s Thomaston home. “Things are great, spectacular even,” he said, as the two chatted at the kitchen table.

It’s a dramatic turnaround for Joey who met Kunkel when she was summoned to Thomaston Center School because he had threatened to harm himself. Now Joey, who has autism, is back at school with a modified curriculum to suit his individual needs and his parents have access to an educational advocate and community resources. 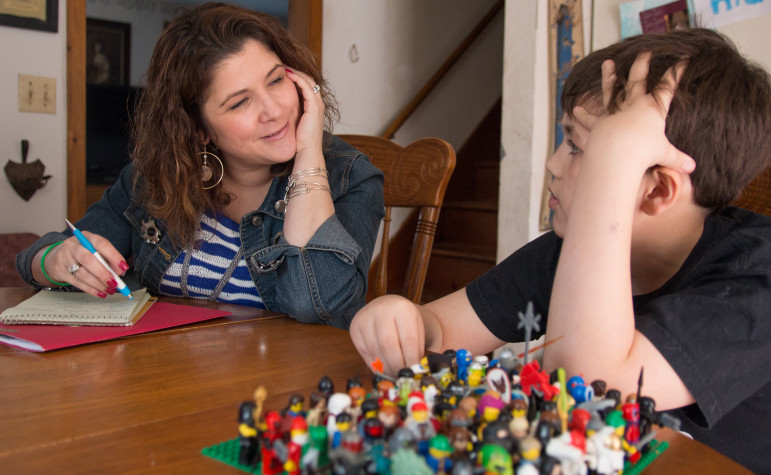 The Smiths are among the thousands of Connecticut families turning to the Emergency Mobile Psychiatric Services (EMPS) — a crisis intervention program that includes a network of 150 mental health professionals who assist children experiencing a behavioral or mental health crisis at home, school or in the community. Like a SWAT team called into action, EMPS clinicians can respond immediately by telephone or mobilize to provide face-to-face intervention within 45 minutes of a call to 2-1-1 placed from any Connecticut town.

Last year, EMPS served 10,560 children and families – that’s a 61 percent increase from 2010 – and experts expect the demand for services will continue increasing. Funded by the state Department of Children and Families in partnership with United Way of Connecticut, EMPS was designed to serve children up to age 18 in their homes and communities, reduce the number of emergency department visits, and keep youth from more restrictive and costly interventions – such as hospitalizations, congregate care settings or arrest – whenever possible.

Meantime, Connecticut has saved about $3.5 million in Medicaid funds by diverting children from inpatient settings, while the percentage of youth in DCF’s care who are served in congregate settings has decreased to 23 percent from 29 percent.

“Clearly the ability to quickly respond to children in crisis at their homes is a vital part of a healthy system of care,” said Joette Katz, commissioner of the state Department of Children and Families, whose administration has worked to “re-align” the mental health system so more “children get the services they need while living with their families and in their communities.”

“Kids do much better when they get help in their natural environment,” said Tim Marshall, EMPS contract manager for the state. “The more restricted the level of care, the more artificial the environment, which makes it difficult for kids to develop the habits and coping mechanisms they need to live in a normal environment.”

Most calls to 2-1-1 for crisis intervention come from parents and family members (43 percent), followed by educators (33 percent) and Emergency Department personnel (11 percent). The EMPS program is open to all children, whether or not they are associated with DCF or have health insurance. EMPS staff can provide follow-up services at home or school for up to 45 days following an intervention.

“We see the entire gamut from little ones with temper tantrums to children with attention deficit hyperactivity disorder who can’t be controlled to older kids who may be suicidal, homicidal, or injuring themselves. Whatever the crisis, we work with families and schools to support the child,” said Michelle Andrews, EMPS team leader at Wellmore Behavioral Health in Waterbury. Wellmore is one of six agencies that provide crisis intervention services from 15 EMPS satellite sites statewide.

“By bringing services to children and families, we’re able to reduce major barriers to accessing mental health care, including a lack of transportation and a reluctance by some to visit a mental health office,” said Jeffrey Vanderploeg, director of the EMPS Performance Improvement Center at the Child Health and Development Institute. He cited data showing children served by EMPS experience “positive outcomes,” including improved overall functioning and a lessening in the severity of their problems.

The growth of the EMPS program comes at a time of heightened awareness of the need for mental health services following the massacre that left 26 people, including 20 children, dead at the Sandy Hook Elementary School in Newtown last December. EMPS clinicians were among the first responders to arrive at the firehouse to assist and comfort families waiting for news about their children.

“We thought we were responding to a school shooting involving one death. It wasn’t until we got to the firehouse that we realized the magnitude of what was happening,” said Andrews. “We did whatever we could to help in the moment, whether it was holding hands, looking at pictures of the children, or contacting family members. The inner strength of those families facing such unimaginable loss left me in awe.”

An estimated 39,000 children live with a serious mental health condition in Connecticut, according to the National Alliance on Mental Illness. Sixty-three percent of the children served by EMPS last year reported one or more trauma exposures.

“We’re seeing a growing number of kids with more severe mental health problems,” said Brenda Concepcion, a social worker at Central High School in Bridgeport, which has 2,300 students. She contacted EMPS about 17 times last year, primarily for help with students who were suicidal, harming themselves, or severely depressed.

“The fact that (EMPS staff) are mobile is the biggest and greatest thing,” said Concepcion. “They are my second set of eyes and ears.”

At the Marine Science Magnet High School in Groton, principal Nicholas Spera contacts EMPS clinicians “any time a student is thinking about or already harming themselves.” He has seen an increasing number of students who are “cutting” themselves, behavior that can lead to more self-harm without early intervention. That’s where EMPS comes in. “Their knowledge and ability to connect with students is amazing,” said Spera. “They help students acquire the skills they need to be safe and healthy and learn.”

“Emergency departments across the state are overcrowded and they’re often not the best place for a child with a behavioral health issue,” said Jacoby. “We work with EMPS to get kids out of the emergency department who don’t need to be there and make sure they receive follow-up care in the community.” EMPS assists hospital staff to find the appropriate setting for children who require a higher level of care, he said. 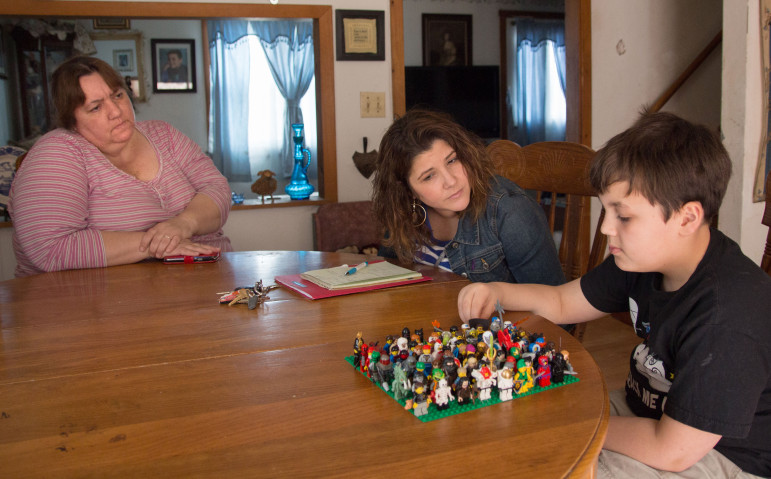 Marshall believes EMPS also helps to keep youth out of the juvenile justice system. “We’ve seen an increase in the number of kids entering the juvenile justice system for behavioral health reasons that could have been avoided,” he said. “One of the unintended consequences of having officers at schools is that police become involved in behavior and discipline issues in school districts that aren’t clear about their role. Incidents that may have led to a suspension in the past, can now lead to arrest.”

The need for mobile intervention services surfaced a decade ago because the state was “spending a disproportionate amount of funds to treat children with mental health needs in institutional settings,” said Robert Plant, chief clinical officer at Wellmore, who helped design EMPS when he worked at DCF. But the program “wasn’t producing the results we needed,” prompting DCF to contract with the Child Health and Development Institute to improve quality and performance, he said.

A revamped program was launched in 2009 with changes that included the statewide use of 2-1-1 to access EMPS (rather than every community having its own system) and incentives to local providers to conduct in-person interventions. Now 93 percent of all calls to EMPS result in a face-to-face response. The median response time for a clinician to arrive at the scene is 29 minutes.

While the number of children served by EMPS has increased, experts suspect many more could benefit if they knew about program or didn’t hold back due to the societal stigma associated with mental health. “You wish there’d be less need for services, but that’s not the case,” said Plant. “A lot of children and families are under stress.”

Despite the inherent challenges of the job, Kunkel echoes sentiments shared by many of her colleagues.  “I can’t imagine doing anything else,” she said, especially when there are success stories such as Joey Smith’s. “That makes everything worthwhile.”

Back in Thomaston, Lisa Smith remains hopeful that changes underway at home and school will make a big difference in her son’s life. “He’s more positive and a lot happier,” she said. “This program has helped our family tremendously.”

EMPS counselors are available immediately to talk by phone or evaluate the situation, 24 hours a day, 365 days per year. EMPS hours of mobility are: 9 a.m. to 10 p.m., Monday through Friday; and 1 p.m. to 10 p.m. on weekends and holidays.