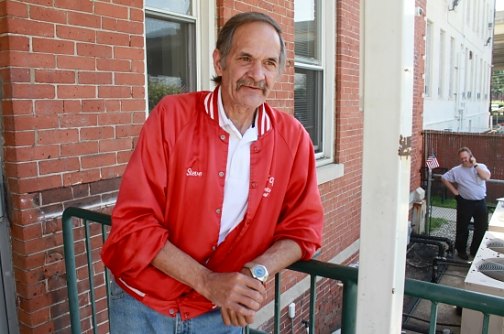 At 55, Stephen Norko says he was at “the lowest point’’ of his life.  Homeless, unemployed, and feeling sick, the 17-year Navy veteran couldn’t get medical care at a VA hospital because he had an “other than honorable’’ discharge. “They wanted nothing to do with me,’’ Norko said.

A VA health care worker, who met Norko at a homeless shelter, encouraged him to do what few veterans have done—fight the decision that denied him VA medical care. He became one of a handful of veterans nationwide to appeal a health eligibility decision in the last two years.

This year—with significant legal and political support – he won. Advocates for veterans say they hope the case will prompt other veterans with “other than honorable” (OTH) discharges to seek VA benefits, which many assume are out-of-reach.

“It’s a big myth out there that an OTH is automatically ineligible,” said Michael Taub, who works with veterans in the Homeless Advocacy Project in Philadelphia and has been spreading the word that vets with other than dishonorable discharges may often be eligible for VA medical care.

Statistics show that appeals such as Norko’s are rare.  Official figures from the Veterans Health Administration’s Health Eligibility Center in Atlanta show only six appeals were filed nationally through the central office in the last two years, including one in New England. Of the six, two were successful, three are still pending, and one was withdrawn by the veteran, according to the Eligibility Center. Norko’s appeal, which did not go through the central office, is not included in those numbers.

In Norko’s case, which includes commendations and honorable discharges prior to re-enlistments, a failed drug test led to his OTH discharge in April 1992. He had other sporadic violations while in the Navy, but less than a year before he was discharged, he received a Letter of Commendation and a Good Conduct Award.

Norko told his story last year to a VA health care outreach worker while staying at Spooner House, a Shelton homeless shelter. The worker referred him to the nonprofit Connecticut Veterans Legal Center, which took his case and represented him for free.

Last summer, the center appealed the initial decision denying Norko’s benefits to the VBA regional office in Newington. The appeal cited Norko’s extensive Navy record and contended that his drug violation didn’t “rise to the level of dishonorable conduct or willful and persistent misconduct, ” according to the Center’s brief.

In December 2011, the VBA notified the legal center that Norko’s appeal had been successful. For unknown reasons, his name didn’t appear in the VA computer system until March 2012, which meant he couldn’t receive medical care until then.  During the gap, U.S. Rep. Rosa DeLauro’s staff got involved, contacting the VA on Norko’s behalf, so that he could get care.

Veterans’ advocates say there are countless other “Stephen Norkos” who should be getting VA medical care but either don’t bother to apply because they incorrectly assume their discharge status makes them ineligible, or don’t know that they can appeal VA rejections. Advocates say negotiating the VA system alone is extremely difficult.

“I’m not sure how we can reach these folks other than camp outside of an eligibility office,” said Margaret Middleton, executive director of the Connecticut Veterans Legal Center.  “There’s a lot of misinformation out there about how you’re eligible for VA services.”

In Connecticut last year, of 2,383 people who applied for VA health care, 59 percent were ruled eligible, 25 percent were deemed ineligible, and 16 percent are pending, according to figures from the Eligibility Center. The most common reasons for rejections were exceeding income limits, serving less than 24 months of active duty, not having qualifying active duty, or the nature of the discharge.

“I think they’ve been told somewhere along the line they are not eligible, whether when filing a claim or hearing from other vets,” he said. He pointed out that there are circumstances when a vet with an OTH is automatically ineligible for VA medical care, such as being absent without leave (AWOL) for 180 consecutive days.

“But in most of the cases I’ve seen, there is flexibility,” said Taub, director of the Homeless Advocacy Project’s veterans’ program.

Patrick Bellon, executive director of the advocacy group Veterans for Common Sense, said he has concerns that the military is using OTH status inappropriately in some cases, to punish veterans who break rules because of underlying mental health problems.

“The real problem is whether or not they deserve the ‘other than honorable’ discharge, or if it’s the result of extenuating circumstances,” he said.  “How many are deserved, and how many are the result of an attempt to deny rightful benefits?”

Veterans are not automatically entitled to VA medical care.  Determining eligibility is a complex process in which factors including length of service, income, disabilities, commendations and type of discharge are weighed, said Pamela Redmond, spokeswoman for the West Haven VA. Middleton said Norko’s case highlights that the OTH discharge issue is “a place where lawyers getting involved are going to make a difference.” On a larger scale, she said, VA’s eligibility process needs to become “clearer, more transparent and quicker.”

Linda Schwartz, commissioner of the state Department of Veterans Affairs, said her department and several veterans’ organizations have service officers trained by the VA to represent veterans making claims to the VA.  She agreed that many veterans need help navigating VA rules, citing her own experience after serving as a flight nurse in Vietnam.

“I can tell you, I have a doctorate from Yale, and I had a service officer person who handled my claim,” she said.

For his part, Norko, who now lives at Homes for the Brave in Bridgeport, a residence for homeless veterans, said he was grateful to all who helped him.  A Bridgeport native, he said he couldn’t have made the appeal on his own, nor would he have thought to do so.

“It takes the right people, sometimes, to put you in the right direction,” said Norko, who at one point lived in his car after he lost a maintenance job in Norwalk.  “Honestly, I thought I was done for,” he said.