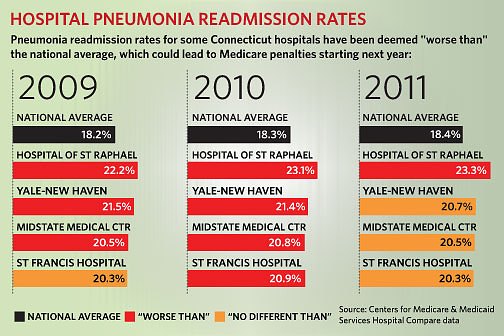 Patients treated for pneumonia at four Connecticut hospitals have ended up readmitted to the hospital within 30 days at rates significantly higher than the national average—a lapse that the federal government considers costly and potentially harmful, and that could lead to Medicare penalties beginning in 2012.

Two of the hospitals – MidState Medical Center in Meriden and Yale-New Haven Hospital – exceeded the national readmission rate for two straight years, in 2009 and 2010, federal data shows. A third, St. Francis in Hartford, exceeded the rate in 2010. Although the most recent rates for all three were deemed within average range, they remained higher than the national rate. The Hospital of St. Raphael in New Haven, which plans to merge with Yale-New Haven, has exceeded the readmission rate for three years in a row—a repeat deficiency that the hospital’s director of quality improvement says St. Raphael’s is aggressively trying to address.

Hospital readmissions have been under scrutiny as health reformers look for ways to cut spending and improve care. Nationally, about 20 percent of hospitalized Medicare patients are back within 30 days, at an estimated cost of $17 billion a year, according to the Medicare Payment Advisory Commission.

To view how patients rate hospitals and other hospital ratings click here.

Of special concern to federal officials are 30-day readmissions after a hospital stay for three conditions: pneumonia, heart attack and heart failure. Health reform legislation allows the federal Centers for Medicare & Medicaid Services (CMS) to withhold a portion of Medicare payments to hospitals that have excessive readmissions, starting with up to 1 percent in fiscal year 2013 and rising to 3 percent in 2015—penalties that could reach into the millions of dollars for some hospitals.

Patient outcomes from July 2008 to June 2011 will dictate the penalties leveraged in 2013, a CMS spokeswoman said.

Health experts say high readmission rates for pneumonia, as well as other conditions, are mainly driven by lapses in post-discharge planning and follow-up care.

“There’s an element in all care settings of making sure providers are delivering the best evidence-based care, but the readmission issue is about ensuring a comprehensive discharge plan,” so that patients know what medications they need and pursue follow-up care, said Saranya Kurapati, director of operations for the STAAR program. STAAR is a multi-state project—in Massachusetts, Michigan and Washington—aimed at reducing re-hospitalizations.

“From the first day,” she said, “hospitals can take steps to make sure a patient is well-poised to transition out—that they understand their diagnosis and care plan—and to improve the hand-over”  to community-based care.

CMS recently began publishing data (on its Hospital Compare website) on risk-adjusted readmission rates for pneumonia and heart conditions. That data shows the Hospital of St. Raphael with a pneumonia readmission rate that is significantly higher than the national average—23.3 percent, as compared to 18.4 percent nationally. The hospital’s pneumonia rate has climbed every year since 2009, exceeding the national rate.

Jim Judson, director of quality improvement at St. Raphael’s, said the hospital is “taking (the readmission problem) very seriously.” The hospital has an interdisciplinary team that is focused on improving the transition to post-hospital care, he said, and is working on providing patients with easy-to-understand videos about the symptoms and care of pneumonia and heart conditions.

Like other inner-city hospitals, St. Raphael’s patients often have co-morbid conditions that can land them back in the hospital after discharge, Judson said. Readmissions are counted, no matter why the patient returns within 30 days. That means if someone discharged after pneumonia treatment falls and breaks a hip and is back three weeks later, the hospital takes a hit.

“They may have other issues not related to pneumonia—a fall, a chronic condition, a secondary diagnosis,” Judson said, adding that St. Raphael’s treats a large elderly population.

At Yale-New Haven, the pneumonia rate has dropped slightly in recent years and now falls within a range considered “no different” than the national average—20.7 percent. But the formula for determining penalties means the hospital could still face withheld Medicare funding, said Dr. Tom Balcezak, Yale-New Haven’s chief patient safety and quality officer.

Balcezak said that while the readmission measures have generated “considerable handwringing” among some hospitals, “I agree with the principal—once you’re treated, you shouldn’t have to be re-treated again. It’s a complex problem that’s not going away.”

He said Yale-New Haven has an active multi-disciplinary committee that has been working on ways to reduce readmissions for the past two years. The committee has focused on reducing the heart failure readmission rate, and “we hope to do the same for pneumonia,” Balcezak said.

“I don’t think there are many hospitals that can say they have those kind of (low) rates across all three” conditions, he said.

Yale-New Haven is adopting a trio of initiatives that experts say are critical to reducing readmissions: Ensuring that patients understand their discharge instructions and know what symptoms to watch for; giving patients a clear medication list; and working with patients to schedule a follow-up appointment with their health care provider within seven days of discharge.

At MidState—where the pneumonia readmission rate went from 20.5 percent in 2009, up to 20.8 percent in 2010, then back down to 20.5—a task force has been working with skilled nursing facilities in the area to improve the post-discharge transition, hospital officials said. Hospital staff now schedule patients for follow-up appointments with their community doctors.

“In the last couple of years, we’ve had a paradigm shift in the way we do things. We used to discharge patients; now we are transitioning patients,” said Dr. Howard Dubin, director of MidState’s hospitalist program.

A recent MidState report showed that 92 percent of discharged patients who needed a follow-up by a cardiologist went home with an appointment scheduled in advance, said Dr. Harold Kaplan, vice president for medical affairs. The hospital is trying to do the same for pneumonia patients.

“Sometimes we are challenged to find PCPs (primary care physicians) who can and will see our patients,” Kaplan said. He said MidState also is working to improve the transfer of patients’ medical information to physicians in the community.

Most Connecticut hospitals have pneumonia readmission rates that are considered within the national average. Among them is New London’s Lawrence & Memorial Hospital, where rates have decreased over three years. The most recent readmission rate is 16.9 percent—down from 17.7 percent in 2009.

None of the state’s hospitals has a rate deemed statistically “better than” the national average, under the federal rating system. The hospital with the best pneumonia readmission rate in the most recent reporting cycle was Middlesex Hospital in Middletown, at 15.9 percent.

Nationwide, 64 hospitals have rates deemed better than the national average, while 163 have worse rates, according to a report by The Joint Commission. CMS calculates readmission rates using statistical modeling that adjusts for patient risk factors.

In a recent report, the American Hospital Association said readmission rates may be an “ill-advised measure of quality” and may be influenced by socioeconomic and demographic factors. The group also expressed concerns that the formula that will be used to determine which readmission rates warrant penalties is stricter than the standard calculations.

A September report from the Dartmouth Institute for Health Policy & Clinical Practice found that nationally, there was little change in 30-day readmission rates for pneumonia, congestive heart failure and other medical conditions between 2004 and 2009.

Fewer than half of all patients discharged in Connecticut visited a primary care clinician within 14 days, the report says. Other regions exceeded 50 percent.

To view hospital ratings go to Data Mine or click here.

One thought on “Hospitals To Face Penalties For High Readmissions”