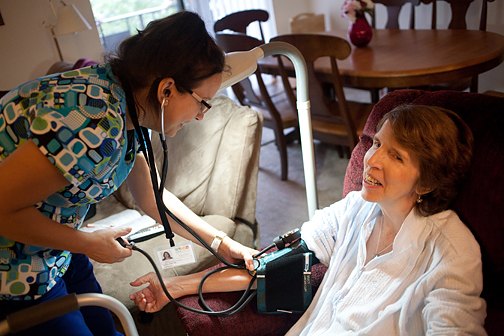 Nurse Tish Allen hooks Judy Taber to a vacuum system to promote healing of Taber’s latest pressure ulcer. Allen asks how Taber’s pain rates today on a scale of one to 10. “Nine,” replies Tabor, who suffers from a rare spinal disease, ankylosing spondylitis, which has taken away her ability to walk, swallow or turn her head completely.

Perhaps the most remarkable thing about this treatment is that it’s happening in Taber’s Hamden apartment – not a hospital. Like many Connecticut residents, Taber depends on home care.

But as reliance on home care grows, inspections of agencies in Connecticut are backlogged, and the state rarely imposes financial penalties on agencies found with patient-care violations, a review by C-HIT has found.

The state is about six months behind in inspections of these agencies, according to its own and federal standards. Inspections typically turn up lapses in patient care and documentation.

But even when such inspections find problems, agencies are almost never penalized for those violations because the Department of Public Health (DPH) lacks the statutory authority to impose fines, a spokesman for the department said.

In a 2011 inspection report, the Berlin Visiting Nurse Association was cited for violations that included not following physician diet orders, failing to test blood sugars on a diabetic, failing to get social work help after observing volatile family dynamics, and failing to obtain safety equipment for a patient that was ordered by a nurse. No fine was assessed.

“The issue is the authority that the department has to issue those civil penalties.  We don’t have the authority to do that [impose fines], ‘’ said William Gerrish, spokesman for DPH.

Judith Stein, executive director of the Willimantic-based Center for Medicare Advocacy, says it would be ‘’wise’’ to give DPH the power to impose fines.

“If you have only a hammer and no smaller little cudgel to use—that is, your only penalty is to not license an agency—very often it means nothing happens. I know that access to home care, because of staffing concerns, is something we need to worry about. Nonetheless we want access to good home care,” said Stein.

She said that inspections are also crucial. “At home a person is completely at the mercy of when the staff comes and what they do when they’re there…Often, there is no one there to observe and protect,’’ added Stein.

Under federal rules, all Medicare-certified home health agencies must be inspected at least every three years with the inspections usually done on the federal government’s behalf by DPH.

In Connecticut, DPH inspects an agency every two or three years, depending on its federal status. Re-licensing has been delayed for the past six months, with 12 of the state’s 98 agencies overdue for inspections, according to Gerrish.  He said the inspections should be back on schedule within two months, as the department implements new management practices.

Although the state department has authority to impose fines on other health care providers, such as nursing homes, DPH does not have such statutory authority when it comes to home health agencies, according to Gerrish.  Instead, in cases of serious violations, DPH may enter into a “consent order” with an agency, in which the provider pledges to follow a corrective action plan and may also pay a fine.  Serious violations also can lead to a loss of Medicare certification.

Medicare terminations and consent orders are rare in Connecticut, however. The last consent order involving a home health agency was issued in January 2010. That agency, American Home Health, Inc. of West Hartford, agreed to a quality improvement plan, but paid no fine. 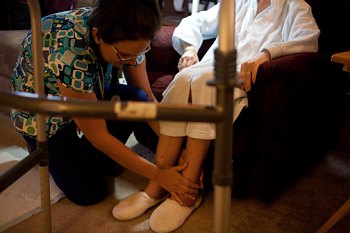 The federal Agency for Healthcare Research and Quality, an agency that tracks data on health care quality, safety and cost, rated Connecticut as “very weak” in home care, citing measures such as medication management, improvement in mobility and hospital readmission as problems in care.  Industry officials questioned that rating based on the age of the data released this summer, which goes back to 2006.

Pilot programs around the state are working to improve coordination. Spenard points to one project to manage congestive heart failure, the most common cause of hospital readmission. Now participants use the same education materials so that patients don’t get mixed messages, according to Spenard.

Home care is a growth industry because of an aging population and the movement of patients out of institutions.  But agencies are challenged by shrinking reimbursement and by competition to recruit staff. Most consumers do not know how to shop for services – or even that shopping is an option.

Payment happens after services are rendered, if at all. Medicare and Medicaid randomly review case files to determine if a patient received the appropriate services. If the review finds that visits were too frequent or included too many specialized therapies, the federal government demands a refund. Those givebacks can run to six figures, according to Hoyt.

Small non-profits are most vulnerable to these financial stressors. A New Hampshire study of 58 New England visiting nurse associations projected that 47 of them will lose money this year. By 2015, it predicts 57 will be in the red. A recent study commissioned by the National Association for Homecare and Hospice showed that the majority of home health providers would lose money on Medicare patients under proposed reimbursement changes. Agencies took an overall 3 percent cut from Medicare last year and expect another 5 percent cut Jan. 1, according to Hoyt.

Nevertheless, new players enter the market in response to demand. In a typical year in Connecticut, about 30 people or entities begin the licensing process. Anyone can open an agency, provided they hire staff with the requisite qualifications.  Owners of home care businesses in Connecticut include registered nurses, holding companies and the Government of Dubai. 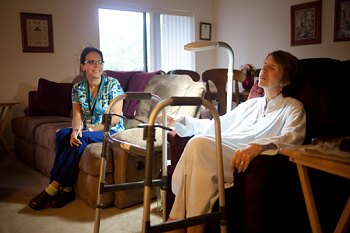 Despite financial pressures, agencies must compete with hospitals, where pay is generally higher for a skilled workforce. Monica Still, a nurse with 25 years’ experience in home care, knows how difficult that can be. She became acutely aware of the problem recently as a home care patient. It took a month to get the physical therapy visits her doctor had ordered, said Still, a board member of the Connecticut Health Policy Project.  Agencies need to have a workforce of speech, occupational and physical therapists, aides and nurses.

Recruiting just any nurse will not do. “For home health providers there is a need for nurses with solid experience,” said Kathryn Roby, a consultant with Qualidigm. They often must make judgments independently and work with patients who are acutely ill.

Much of the hands-on care in the industry is done by home health aides. The last training program for home health aides in the state closed with a reorganization in the community college system. So the workload has shifted to patient care assistants with retraining to work in the home environment.

Connecticut College Professor of Economics Candace Howes studies the long-term care workforce and argues that paying workers well translates into better patient care. In a California study, she linked low wages to high turnover, which she demonstrated was associated with more falls and trips to the emergency room. 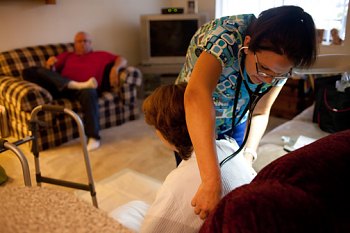 Taber is a cheerleader for VNA Community Healthcare, the agency that serves her. For many patients, however, the choice of a home care agency is made in a time of crisis with little information.

Often patients simply sign on with the agency recommended by the hospital that is discharging them.

“The patients don’t have a voice, and that’s what’s wrong,” said Still.

Putting patients in charge of their own care is key to improving it, said Roby. “What (patients) grieve most is the loss of control,” she said. Roby offers training to help nurses work with patients to set their own goals. Something as simple as being able to get the mail can motivate a patient to do difficult exercises, she explained.

An emergency room nurse may save a patient’s life, said Roby. But she added: “Now that you’ve saved his life, we have to teach him how to live it.”

When patients live their lives at home, rather than in institutions, health care spending drops.

For Taber being at home is a tremendous quality of life boost. “If it wasn’t for the VNA, I would be in a nursing home,” says Taber. In addition to the wound vacuum, she has a feeding tube, a catheter and a pump for pain medication.

Her husband, Dave, manages most of her care, with help from visiting nurses and from aides. The Tabers joke that their home looks “like CVS,” because of all the bandages, creams and so forth. But in many ways, life seems quite normal as Judy and Dave quip about the room temperature and her penchant for shopping on QVC.